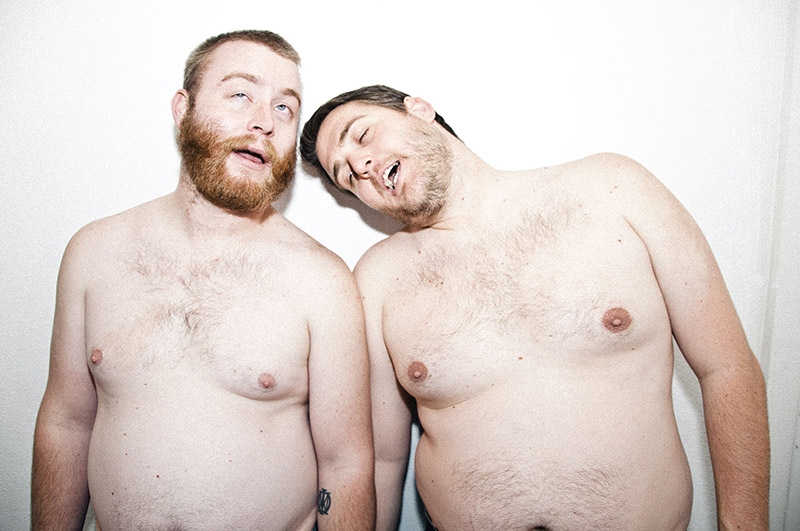 Baby Gurl share their Downtown Music practice space with Yaktooth, and there’s somethin’ in the wat—er—Natty Light around those parts. The best way to fully grasp what Chris Wadsworth (bass, vocals) and Jordan Fairbanks (drums, vocals) do as a duo in Baby Gurl is to see them perform. Their between-song “banter”—if one could call it that—is reminiscent of cavemen grunting before they switch back to grooving bass-and-drum tracks riddled with odd vocals with effects, spacey keys and other quirky sounds. The closest thing to their hilarious and slightly unsettling stage persona is to listen to “Tweaker Time,” where bouts of crying interrupt the song’s trajectory. Though it may sound dark on their record, A Name And A Blessing, Baby Gurl have one prerogative when it comes to fully manifesting their music live: “What am I gonna do to make this asshole laugh onstage while we’re playing to [where] he fucks up?” says Wadsworth of playing with Fairbanks. “We do not try to take ourselves seriously onstage.”
Baby Gurl formed in April of 2012. Previously, Fairbanks became interested in hardcore via Matt Wiley (currently of Eons) and played in Medea. He expatriated to Maryland to play noise music for a spell, and even played in Eons prior to Taylor Orton. Wadsworth’s first band was Medicine Circus, and he would go on to play in the inimitable Heathen Ass Worship with Josh West, then Long Distance Operator with West and Whil McCutchan of Yaktooth. “I actually met Jordan on a social fucking app on a goddamned phone,” says Wadsworth. “It was a gay hookup app, pretty much … and it’s called GROWLr … All he said about himself was, ‘I’m all about the music.’” The two started jamming out a confluence of “riffs, drums, riffs, drums,” says Fairbanks. They initially tried out West to play guitar. Wadsworth says, “He played with us for, like, an hour or something, and stopped, and he was just like, ‘I’m done.’” To their taken-aback responses, West said, “You guys don’t need a guitar player.”
What has resulted is, at its core, music that traverses funky rhythms and collapses into stoner metal breakdowns with Wadsworth’s fuzzy scale noodling accompanied by Fairbanks’ on-point, rhythmic drumming. Wadsworth considers Baby Gurl’s sound as “definitely heavy,” he says, but, “… it’s not heavy like metal, ‘We’re just there to rip heads off,’ and shit [though] it’s just a lot louder and heavier than people would expect.” The two acknowledge that their “heavy” sound is fused with a groove-based approach to songwriting. Fairbanks says, “I’ve heard two descriptions that I really like. One is: ‘Tim and Eric playing Kyuss songs,’ and the other one is ‘Frank Zappa meets Primus.’” Baby Gurl recorded their album with The Dark Wizard, too, which they released in February of 2013. The two initially included the sparse lyrics that appear on A Name And A Blessing as jokes in terms of the subject matter—sometimes just to provide verbal percussion, so to speak. “James,” for instance, includes the words, “Watch out, motherfucker. I’m gonna roll you over in my electric wheelchair,” a first-person narration from a paraplegic thug. Additionally, the “shit” and “fuck” of “Neanderthal” functions as a count-off to the next song part that Fairbanks had trouble transferring to. Amid the zany, “tongue in cheek” gibberish, though, “it kind of sounds dark to me,” says Wadsworth. “… That’s not what we’re trying to do live—we’re just trying to be happy and stupid!”
Baby Gurl have plans for a follow-up full-length to ANAAB along with a split with some friends in California. “We have a million ideas that we just have to work on,” Fairbanks says. The main conceit behind their upcoming releases, they say, would be to spend more time in the studio, since they recorded their debut in a mere six hours and spent just another six hours adding the sound effects, although Wadsworth clarifies and says, “I’m not saying we’re going to stop having fun. It’s just that—when it comes to recording—it’s going to take a little more time.” For the time being, A Name And A Blessing is available for download for a suggested price at babygurl.bandcamp.com.
The band accompanied Yaktooth on the tour of the West Coast, having also made friends with Gaytheist during their SLC stop and reconnecting with them for a show in Portland, which, they report, went amazingly. Baby Gurl continue to play out of state: “We do weekend warriors. Since June, we’ve done one weekend warrior where went to Denver,” which, Wadsworth says, included two shows in Denver and one in Laramie, Wyo. They also plan to make use of their West Coast hookups to play a Central California tour.
Regarding their local niche, Wadsworth finds that Baby Gurl and Yaktooth don’t necessarily fit into the Salt Lake music scene, which spurs Fairbanks’ dichotomization of SLC’s sound in general: He says, “I feel like we do in the sense that we’re kind of doing our own thing. Everyone in the Salt Lake scene is doing [that], and they’re pulling new influences that they find out about into their own projects, and it just escalates the music scene in Salt Lake City [to be] greater and greater all the time.”
In terms of headlining with Yaktooth, Wadsworth says, “Those guys suck. I hate their lives.” Brotherly love aside, you don’t want to miss this month’s Localized—think “Tooth Gurl.”