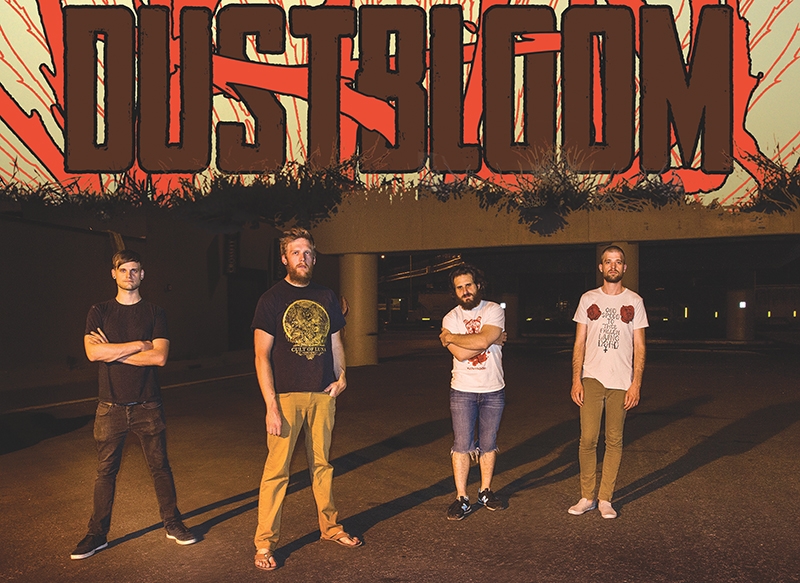 Photo: Helen Leeson
Sometimes a music project is too important to simply abandon. With long stretches of band roster difficulties and other frustrations, Dustbloom could have easily become a minor footnote on the pages of Salt Lake City rock history, but Ian Cooperstein (guitar/vocals) and Cameron Jorgensen (drums/keys) kept the dream alive. The duo met playing together in Arches, forming a connection almost immediately. “Compared to the other guys in the band, me and Cameron were closer in age,” says Cooperstein. “We had different goals. We wrote awesome music, but it was a little strenuous.” He describes the gradual disintegration of Arches in plain, pragmatic terms. With half the band leaving to return to school, Cooperstein and Jorgensen decided to write and record an acoustic album.
Of course, they never ended up finishing it. “We were auditioning people, and we ended up settling on a couple of guys for about a year who didn’t necessarily fit,” says Cooperstein, shrugging his shoulders, “but it helped us at least get out there and play shows and do music.” Their year of playing shows in the valley helped them to get a handle on gigging in Salt Lake City, making mistakes and learning through trial and error. Soon, it was back down to Cooperstein and Jorgensen again—but this time, they decided to keep an eye out for hardcore, dedicated musicians.
Chris Peterson (guitar) joined the band after meeting them at Musician’s Friend. “We just saw him walking around, wearing a lot of cool shirts,” says Jorgensen with a grin. They bonded over a shared interest in heavy music, discovered that they loved a lot of the same albums and, after a brief audition, Peterson cemented his place in Dustbloom.
Now all they needed was a bass player. The band held auditions and briefly fielded a series of replacement bassists. “I was holding out for Jensen,” says Cooperstein. “There was no doubt that this dude was going to be able to do it if he wanted it.” Chris Jensen (bass) took the invitation, and he constantly brings his classical music training and technical talents to bear when writing for Dustbloom.
Today, the band plays a loud, heavy style of post-metal that’s full of lush soundscapes and is rich in dynamics. While they could have continued with their acoustic sound, Jorgensen pushed for a little more heaviness as the band developed. “I just love playing heavy music live. I get way more into it. It gets my blood pumping.” He says he’s always been hyper and that playing fast and loud helps him channel that energy into something constructive.
Dustbloom recently played Crucial Fest, one of Salt Lake City’s premier music festivals for local bands. “I loved the whole experience,” Peterson says. “Salt Lake has great underground music, but it was nice to see a festival-type environment for it and to have everyone come together.” That sense of local pride gushes forth from everyone involved in the project. When asked about other shows they’ve enjoyed, they mention a series of house shows they’ve played. “The house shows are fun because you’ll get, like, 150 people crammed into one room, and the feeling is a lot more intimate,” says Jorgensen.
In the eight months since the official lineup solidified, the band has been hard at work making up for lost time. “This is kinda what we wanted Dustbloom to be this whole time,” says Cooperstein. “Before, we were just writing stuff that was all over the place, and now there’s a cohesiveness.” Utilizing Jensen’s Red Light Recording studio, Dustbloom have found it easier to channel their creativity, and with all members of the band contributing to the songwriting, their compositions have gotten much deeper and more complex. “The original split we recorded with Huldra was basically just me and Jorgensen recording demos at home,” says Cooperstein. It wasn’t easy to make the jump to a full-length, but you can tell that the band is proud of what they’ve been working on so far. “Music isn’t something we just throw out there,” Jensen says. “We have to really put in the work. We have to feel like we’re progressing. There’s no point unless you’re moving forward.”
Their plans for the future are ambitious: “More shows, more writing,” says Peterson. “Honestly, I wouldn’t be surprised if we had another release out a year from now. Maybe an EP or even another full-length.” They’re even hashing out the details for a brief West Coast tour to support the upcoming album.
Being a band isn’t all groupies and label deals. For Dustbloom, it’s been a constant uphill battle to keep the band together. This band has worked hard to get to where they are today, and each member exhibits a rare and enduring passion for the music they write. Keep an eye out for their new album this fall, follow them at facebook.com/dustbloom, and be sure to check them out at Localized on October 12!