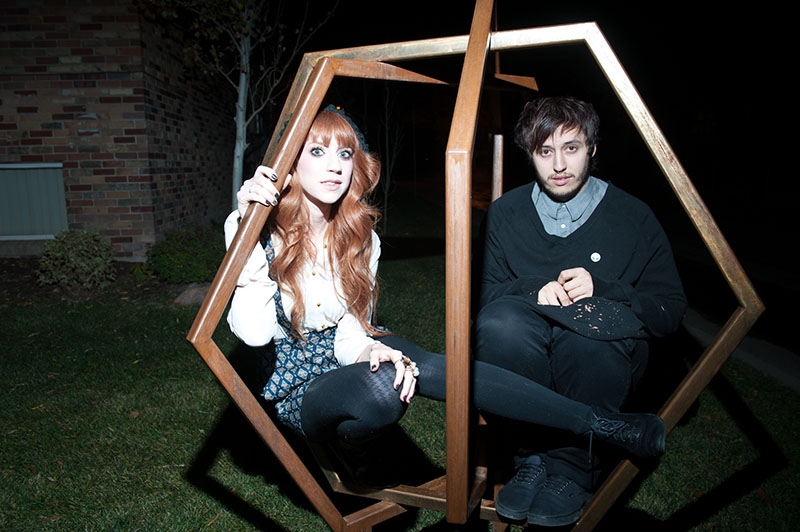 On Friday, Dec. 13, come to Urban Lounge for the warm, emotionally sophisticated dark pop of The Circulars, and get wrecked by Fossil Arms’ articulation of what tape hiss sounds like choking on glass—during shock treatment. Alexander Ortega, of Filth Lords and Editorial Assistant at SLUG, is the opener. Localized is hosted by Ischa B., tickets are $5 and the show is 21+. It begins at 9 p.m. and is brought to you by Bohemian Brewery. If you are unable to attend, are underage or on house arrest, catch the show on gigviz.com.

Fossil Arms may share some influences with fellow Localized band The Circulars, but where The Circulars’ sound is textured and lush, Fossil Arms is a much noisier entity—with a sense of decay and distress threaded throughout the songs, due in part to the employment of lo-fi recording methods. “Time For Words,” posted this past Halloween, evokes an image of Joy Division being attacked by a vengeful, sentient Linn drum and megaphone.
Chaz Costello (bass/vocals/drum programming) and Melody Maglione (keys/drum programming) first met in Arizona as teenagers. The two formed Fossil Arms roughly three years ago, agreeing that the decision to start the band originally came up as a joke. They began as a noise-punk project, until, according to Costello, “Melody was like, ‘Hey, you should listen to more OMD,’” he says. They posted a six-song EP, Tyrannosaurus Flex, on Bandcamp (fossilarmsnoise.bandcamp.com) in January, 2012.
Most of the songs on Tyrannosaurus Flex were recorded at a practice, using a cassette player. Time passed, and new songs were written. Costello explains that they had been “too lazy to record” the new songs, but then panicked—“We didn’t sound like the old recordings anymore,” says Costello. So, they decided to put something new on Bandcamp. The recording process occurs at home, using a digital 4-track and “random cassette players” with levels set high for what Costello refers to as a “blown-out” sound. Their gear selection consists of a Fender Telecaster bass, run-through effects such as octave, chorus, distortion (a Pro Co Rat, specifically) and digital delay. Costello also uses a vocal processor. Maglione primarily uses an Alesis drum machine and Micron synth.
Regarding their inspiration and musical realms of interest, Chaz says he’s pretty much “only listening to darkwave and hip-hop,” with Melody naming J-pop, as well as His Purple Majesty as favorites: “We love Prince,” says Maglione.
Costello describes the compositional process as creating a “cohesive song, fucking it up and trying to come back,” he says. The songs tend to begin with a concept for the rhythm parts, followed by a discussion, then addition of keyboard. “I’m pretty much only capable of writing creepy keyboard parts,” says Maglione. From there, the two describe the process as one of dissection and reassembly: “We add and add until it doesn’t make sense anymore,” says Costello.
I noticed throughout the interview that Costello had a tendency to describe Fossil Arms’ sound in a manner that might lead some to assume that much of what they create is the result of an accident, or equipment-based disaster—“Something always goes wrong with gear at shows,” Costello says. Despite the unpredictable elements Costello refers to, he and Maglione have found a way to make positive use of those elements. For example, the noise in the band’s recordings often sounds like a deliberate and welcome aspect of the music. That’s not to say that there isn’t a very palpable sense of chaos informing Fossil Arms’ very existence, though.
The majority of the duo’s shows have been at house parties. “We prefer them,” Maglione says. Given the aforementioned chaotic element informing Fossil Arms, this would seem to work in their best interests—due to the potential for a more personal experience between band and audience at a house performance with a less restrictive environment. Still, it’s a bit surprising to consider that both musicians prefer house shows—“I’m really bad at being in a band because I don’t like playing in front of people,” says Maglione, who did not seem to be as socially awkward as that statement might imply.
Costello laments a lack of movement or audience participation, saying that the band’s “not engaging.” Melody responds to his statement, saying, “It’s because we’re weird.” She doesn’t appear to mean it as a negative statement—it isn’t—just as a possible reason.  Perhaps the lack of a stage at house shows, which potentially serve to separate musicians from their audience, forces a more direct interaction between everybody present.
Maglione and Costello used to run a venue, Blank Space, which met an unfortunate end due to some disagreements with the landlord. Not an uncommon case, but I’d imagine that after having one’s own space, it would be difficult to find somewhere else that could compare. The two frequently attend shows at Boing! Collective and The Salt Haus, naming Boing! as a shared favorite location. Smaller, community-supported venues, quite similar in nature to the aforementioned houses, seem to be where Fossil Arms thrive.
Continuing the subject of performance, I asked if the duo have any tour plans. “I would like to tour,” says Costello, but both say that time off work would be an issue. Having the means to feed their cat is also a concern of major importance—I appreciate when priorities are in the right place. Additionally, they plan to record new material soon. Graboid Records has expressed interest in releasing a future recording.
Regarding their reactions to being invited to play as part of Localized, Costello says his was mostly surprise. Considering that his other band, JAWWZZ!!, has played the showcase recently as well, he’s having a pretty good run, closing out the year with a couple of high-profile gigs.
For listings for future shows and other information, search for Fossil Arms on Facebook.