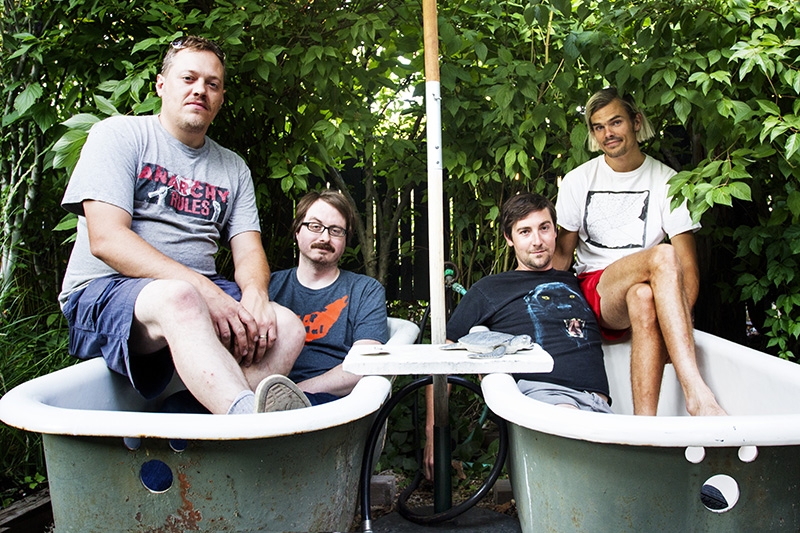 Nick Neihart invited me into his home and spoke with me as if we were old friends, although we had just met. He hummed along to the Roy Rogers & The Sons Of The Pioneers’ Tumbling Tumbleweed record playing as he rolled out homemade dough for a pie. His demeanor is gentle and genuine, though not lacking in gusto—he’s a storyteller who brings an air of thoughtfulness and humor to conversation. His personality translates to his music and songwriting effortlessly, which makes listening to Pentagraham Crackers rock out a welcoming and intimate experience.

Through places such as the restaurant Eva and the no-longer-open record store Slowtrain, the “Small Lake City” effect brought Neihart together with bandmates Ryan Fedor (guitar/vocals), Matt Hoenes (bass) and Jesse Ellis (drums) about two years ago. Coming from other local bands such as The Awful Truth, Tolchock Trio and Albino Father, these scene vets were able to bring years of experience with them as they began to collaborate. “Nick writes the structure of most of our songs, then we each come in with our individual ideas. It’s a good process,” says Hoenes. He adds, “You know how some bands are really close to being explosive and great, but they sell themselves short? It’s like they almost cum, but they don’t. We’re cummin’ everywhere.” The result is garage rock with undertones of both punk and cinematic western—it’s dance music, bar music: the type of music that an audience can’t help but feel a part of. Pentagraham Crackers have been known to play two encores with the crowd still begging for more.

They are a true live band, in the sense that their backgrounds, talents and individual sounds all align onstage in a way that can’t be felt through a recording. As they play, we can sense the sacrifices they’ve made to be musicians, and can relate to the shitty life experiences that push them to write songs. We can laugh and sing along as they share music that they’ve worked hard to create. To put it another way, these dudes are unpretentious sweethearts that can shred your face off with their music.

Although their music is easy to connect with, there are layers of intellectualism and intricacy underneath that push the boundaries of an average rock band. Neihart says, “I sometimes worry that having a stupid name overrides the complexity that we work hard for.” Whether or not the audience is aware of their depth, it’s present throughout the entirety of their work. Neihart is a poet and cares deeply about the impact his words might have. His lyrics are laced with darkness and cynicism, yet remain poignant and offer clear-minded perspective. “Mouthful of Gutters” offers a lamentful reflection: “All my good intentions keep leaking out my mouth/Like a swollen river, they could fill a lake by now.” “Dungeons and Dragons” is a story about the heartache accompanied with growing up: “Now life’s like a watercolor picture beneath the faucet of the sink/Bleeding a myriad of color.” In “40oz of Blues,” Neihart manages to sing about a game of Tetris and make it both beautiful and metaphorical. The effort he puts into writing is an example of the high level of musicianship that Pentagraham Crackers have achieved.

Despite being able to sell out local shows, Pentagraham Crackers are adamant about going on tour. They’ve toured about five times, playing the West and Pacific Northwest—Portland, Seattle, San Francisco, etc. Hoenes says, “It makes you a better musician to play somewhere where no one gives a shit about you.” It’s important for the band to meet new people, explore new cities and for their music to be perceived by new crowds. “Our Salt Lake fanbase is so supportive and sweet, which we don’t always have on tour. I like to give a ‘Level Up’ speech before we play, like we’re in a video game and we’re about to battle the boss,” says Neihart. He relates, “I wish that more bands in Salt Lake went out of their comfort zone and toured. It would contribute to a better scene here.”

While touring is challenging and rewarding, Pentagraham Crackers are also humble about their recognition in their hometown. Hoenes says, “It means a lot to us that we’re respected among our peers. It’s really cool when I wear one of our T-shirts and someone recognizes it. It’s hard to make a living as a band, so we’re grateful for our fans and our fellow musicians.” When asked what music inspires them to write more music themselves, they responded resoundingly with rad local bands such as The Circulars, Color Animal and Strong Words.

Pentagraham Crackers’ latest album, Live! From the Palace of Payne was recorded live in David Payne’s (The Red Bennies) basement. If you couldn’t get enough of its badass guitar solos, Built To Spill–esque lyrics, and bluesy bass, don’t fret, because they will be releasing two EPs at any moment. Be sure to check out their Bandcamp (thepentagrahamcrackers.bandcamp.com) and gear up for a thumping, bumping show at Localized.