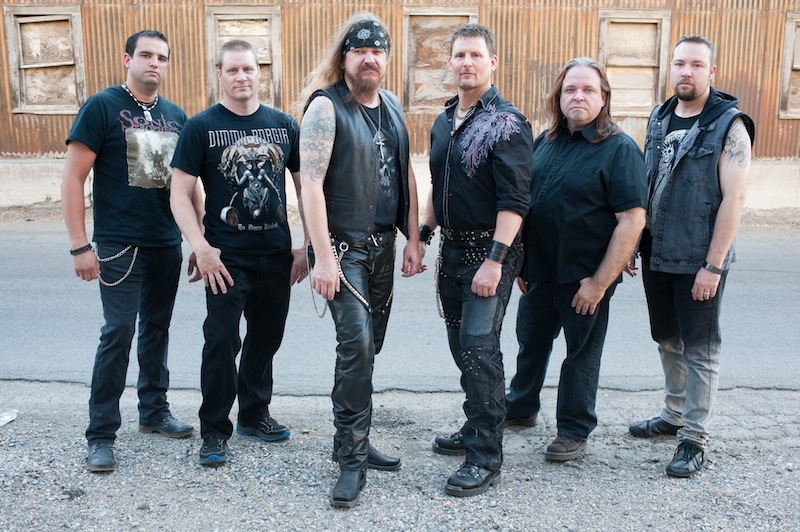 On September 12, at 9 p.m. sharp, Urban Lounge will host a night of metal might where hot-rockin’ thrashers Deathblow and symphonic steel forgers Sonic Prophecy will be inducted into the SLUG Localized hall of fame, and Mister Richter will open. The show is made possible by sponsors Fat Tire, Spilt Ink SLC and KRCL 90.9FM, and by readers not unlike yourself.

Mankind can be a clever breed if we work hard and persevere. Dedication to a craft pays off in the end, evidenced perfectly by this month’s Localized act Sonic Prophecy: a symphonic metal band of six down-to-earth guys who are diligent as hell. They come together every Sunday—not to rest as the Lord did on that day—to rehearse songs and write material in and of their own creation.

The band, consisting of Sebastian Martin (guitar), Raymond Opheikens (bass), Shane Provstgaard (vocals), Steve Bishop (keys), Jeff Dreher (drums) and Darrin Goodman (lead guitar), emerged in 2008. “This is kind of [an] eclectic band,” Provstgaard says. While he says he’s into the classics like Judas Priest, Iron Maiden and Accept, other members have very different tastes and musical backgrounds. “I’m the prog guy,” Opheikens says. I’m told that Provstgaard is a death metaller and that Dreher is really into Slipknot. The eclectic point is driven home when Opheikens says he plays in several groups, and that after the interview, he has to practice with a disco band he’s in.

As far as the lyrics go, Provstgaard is quick to point out that the science fiction and horror genres are where all the good shit is, but he doesn’t limit himself. “I like to cover battles, good and evil. Mythical things … ” Provstgaard says. Even though many of his peers in the metal scene would soak an annotated King James Bible in every body fluid imaginable without so much as batting an eye, Provstgaard tells me of an upcoming song titled “The Fist of God.” “It’s basically the Book of Revelation as a heavy metal song,” he says. However you look at it, the lyrics are written with a game plan. He continues: “We like to tell a story instead of getting [onstage] and screaming about how bad our day was.”
With their member arsenal as a unified, creative force, Sonic Prophecy make music for people who appreciate good production value and technical prowess. Their music blends their individual styles into a chugging, epic blast of American metal with no shortage of solos or grandiose and tasteful choruses. Take their 2011 album, A Divine Act Of War, for example. It’s a crushing testament to the band’s talent, motivation and professionalism in every aspect, from the music to the album artwork. My favorite track off of the album, “Heavy Artillery,” will make you bang your head, and then leave you singing along well after you’re done listening (as I’m doing while I write this).

In addition to their superb music, they’ve got a considerable online presence and following, with a website that’s put together just about as well as any band could ask for. Despite their status as an established band and their musical skill, they would like to see some changes in the way concerts are structured. For starters, decent stage mixing and functional monitors shouldn’t be luxury items for performing bands. “It’s not just a little square box on the stage as a visual prop,” Opheikens says, speaking of stage monitors. “It’s actually supposed to have a function!”

Though the music biz has its fair share of problems, Provstgaard says that the band enjoys playing at Liquid Joe’s. The staff really seems to work hard to make sure everybody is happy—both the audience and the performers. Also, Sonic Prophecy wouldn’t be doing what they do if they didn’t love every minute of it. “In Sonic Prophecy, we really work hard to put on a good show. We have our own sound. Nobody sounds like us and nobody looks like us,” Provstgaard says.

Speaking of glory, the band hints at an upcoming album, Apocalyptic Promenade, which has a tentative release date for early winter and will feature artwork by Aldo Requena. “It’s got a little more ‘70s [and] ‘80s heavy metal influences,” Provstgaard says. He also says that while keeping true to their sound, the album will be darker than previous releases.

Bear witness to Sonic Prophecy at the Urban Lounge Localized show where they will share the stage with thrash brigade Deathblow and opening act Mister Richter. Also check out their killer website at sonicprophecy.com and stay up-to-date on the band at facebook.com/sonicprophecy.