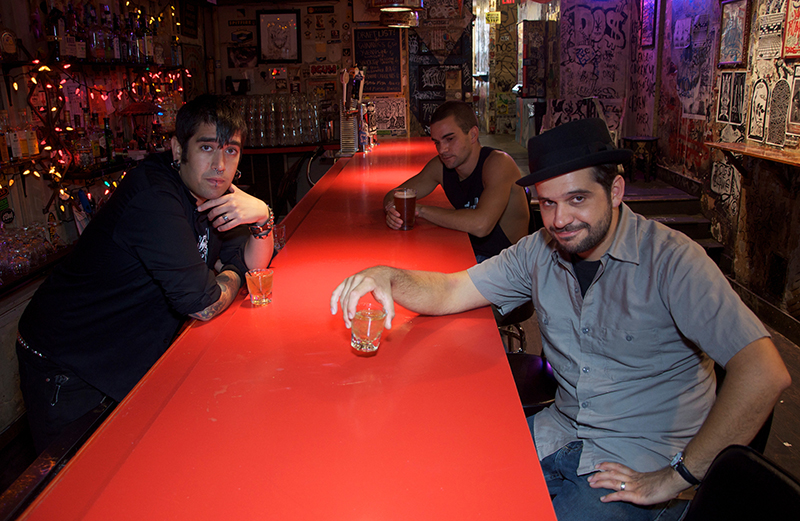 After spending a great deal of time trying to find the venue, I assumed my best venture was the entrance where all the punks were congregating. I joined the crowd and mingled for a few minutes until my friend Josh Madsen, followed by Adam Domnie of Well Okay, indulged the audience with their expressive acousti-punk music. Mañanero was, by far, the band that was the most out of left field on the roster—the sludgy, down-tuned resonation from Chopper’s Dobro reminded me of when King Buzzo of the Melvins went acoustic, with a Theremin adding a psychedelic backdrop. The vibe returned to its punk rock ambiance when Scary Uncle Steve started setting up their gear.

After some frequency problems with the PA, Scary Uncle Steve kicked into their upbeat, carnival-themed folk punk. By the third song, “Let’s Do Brunch,” a three-man circle pit broke out in the audience—it didn’t last long, as most of their songs like “All Out of Perspective” and “Rats” were more relaxed and played like a punk rock waltz. However, the upbeat mood was not deterred—there was some lighthearted banter between the band and audience as they continued to struggle with feedback from the PA. Their ballad to Governor Herbert, “Straight Bashing for Mormons,” got a huge laugh—“We were going to change the lyrics to this song to keep up with the times,” explains guitarist Skunk, “but Herbert keeps fucking up so we never saw the need to do so.” They closed out their set with a Joe Hill cover in which Skunk, being ill-prepared, needed to refer to a lyric sheet while an audience member graciously offered to be his music stand.

Mischief Brew began to set up for their first SLC show in over eight years—they were spending their Labor Day weekend in Salt Lake and agreed to play a couple of shows during their visit (the first being the Joe Hill Centennial Celebration in Sugarhouse Park). The crowd was waiting in eagerness—even the fact that there was a low number of attendees didn’t deter the excitement from my friend who put on the show. “I don’t care if there’s not a lot of people here or that I’m not making money off of this show,” he said. “Mischief Brew is gonna kill it, and it’s gonna be a fun time.” And kill it they did! Mischief Brew played their asses off and got the crowd singing and dancing with their hard-hitting folk punk. They had fun haggling with the crowd and told a story of when a 6 year old girl at one of their shows ironically knew all of the lyrics to “Children Play with Matches.” This sparked a debate of whether it was a result of good or bad parenting when a child is singing lyrics that go “Children play with matches start a fire / don’t do what you’re told / the old are just the old.”

They carried out the rest of their set with the mosh-inducing “On the Sly” and the more gentle “Nomad’s Revolt,” enticing the crowd to join in the chorus, “Kill off Columbus / and turn the world around / after all / the nomads are settlin’ down!” For the finale, vocalist/guitarist Erik Petersen threw on his acoustic guitar and worked his way to the center of the microscopic crowd and enticed everyone to join him in singing “Coffee, God, & Cigarettes.” For their first DIY show in Salt Lake in almost a decade, it was evident by the band’s post-show demeanors that they were very satisfied. As they loaded up their gear, they cheerfully shot the breeze and had a few laughs with the locals.