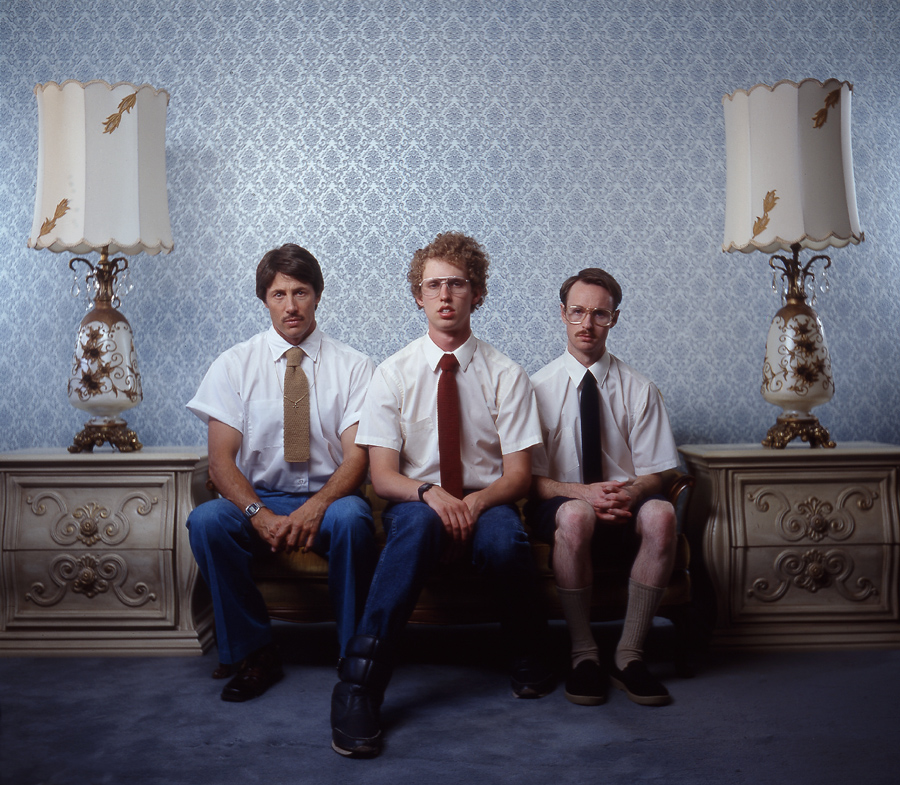 Napoleon Dynamite's cult following is partly in response to the eclectic cluster of characters that give life to the film. Photo: Jared Hess

How well do you remember the year 2004? President Ronald Regan died, the last Oldsmobile rolled off of the assembly line, and The Lord of the Rings: The Return of the King dominated the Academy Awards. For some, the year embodied a series of tragedies, but, for others, their lives were just beginning. Director Jared Hess was awaiting the premiere of his first feature-length film at the Sundance Film Festival. “I was dry heaving like crazy. We had not screened a completed film for anyone. We did not have any idea how people were going to react to it,” Hess says. “I thought it was funny, but did not know if other people would get the humor.” The Sundance cut of the film did not have the opening credit sequence, so “it went from a black screen to Napoleon waiting for the school bus in front of his house with his Trapper Keeper and action figure, and from the first frame, people started laughing, and I had a sigh of relief. You can tell instantly when a comedy is not working, and they laughed from the beginning of the film all the way to the very end. They laughed in all the right places and places I never would have anticipated.” Hess may have had a whiff of success, but there was no way of telling the monumental acclaim that awaited around the corner with Napoleon Dynamite. “The biggest moment was when Napoleon was walking down the street in slow motion in his brown thrift store suit and holding his corsage. The crowd started to cheer, and I was like, ‘Wow, I think we are going to be OK.’”

Napoleon Dynamite has certainly not disappeared and remains a cult classic for many film aficionados. This year marks the film’s 15th anniversary, and to celebrate, the Utah Film Center is hosting a special screening on May 3 at East High School in Salt Lake City with the cast and crew for a special Q&A after the film. There will also be memorabilia from the film showcased onsite. One can only hope for a peek at those moon boots in person. Tickets can be purchased at UtahFilmCenter.org, and all proceeds will benefit the Utah Film Center.

Before his filmmaking career launched, Hess grew up in a rustic section of Idaho, which influenced his admired creation. “I come from a family of six boys. I’m the oldest, and the Napoleon character is this weird hybrid of me and my younger brothers and all of our most idiotic, shameful moments,” Hess says. “So much of the character is drawn from moments in real life. After my mom saw the film, she was like, ‘Well, that was a lot of embarrassing family material.’ The inspiration truly did come from growing up in rural Preston, Idaho, and being a nerd and an outsider.”

As Hess progressed with his passion in filmmaking, many outside influences found their way into his first film’s components. “I am such a Coen Brothers fan. I love Raising Arizona. I think even more of an influence was Errol Morris’ documentary The Gates of Heaven about pet cemeteries. That just blew my mind—the characters, the pace, and the awkward pregnant moments that ended up being so funny and authentic. For me, I really wanted to translate what I saw in that, and put it in a feature film.”

As with all independent film endeavors, nothing ever goes as planned, but an exorbitant amount of cherished memories are created. “One of the more stressful scenes to film was the climatic scene when Napoleon is dancing in front of everyone. It was the climax of the film, and we only had one roll of film left, and that amounts to about 10 minutes [of filming]. With the length of the song, we had about three takes maximum.  I was really worried that we hadn’t quite nailed it, but, in the editing room, we took the best pieces from all of it and made it work,” Hess says. While the last day of filming may have been strenuous on sticking the landing, the take of the entire project was no easy task either. “The first day of shooting was probably the most stressful because two things happened that almost derailed the whole shoot.” After Jon Heder was told to recreate a “tight” perm he once obtained for the 2003 short film “Peluca,” he arrived on location the night before filming began, and Hess says, “The perm was terrible. It was really loose with big curls. He kind of looked like Shirley Temple.” The crew was freaking out because “the hair was such an important character in the film, and we were like, ‘we have to get it right,’ but you can’t give two perms to somebody or the hair will fry and fall out. So, my wife and her cousin spent all night with the hairdresser doing a water perm, and then, Jon Heder, could not wash his hair for the next 23 days of shooting. He had the grossest hair for the whole shoot.” If you thought that was the only mishap on the first day, you would be sorely mistaken. “Also, the morning of the first day of shooting, the camera truck broke down. We had scheduled to shoot at the D.I. in Preston the day, and it arrived three hours late. So, between the hair and the camera truck, the first day of shooting was the toughest.”

Thanks to a dedicated cast and crew, the project was completed and became a smashing victory far beyond its premiere in Park City, Utah. Audiences across the world have welcomed Napoleon Dynamite into their homes with admiration for its quirky universe and odd elements. “We totally have the moon boots. Those were Jerusha’s [Hess’ uncle’s] moon boots that she borrowed. She was the costume designer. We’ve got them, and they are really disgusting and still taped up. I would probably take the Huffy sledgehammer or the time machine. I think our production designer has the latter.” Furthermore, its incredible that individuals still approach Hess with lines of dialogue that include “’Your mom goes to college’, or ‘Do the chickens have large talons,’” but this was not unusual to Hess. Hess says, “I remember having a rough day, and I was second-guessing stuff as any director does in the course of shooting. My script supervisor, Bryan Lefler, came over to me and said, ‘All the kids that are extras are quoting Napoleon’s lines between takes,’ and I thought maybe we are making something that will not just disappear after it is made.”

As we move forward into the future and celebrate this whacky tale, the idea of a follow-up is still being discussed. “We have been approached by a studio over the years about doing a sequel. It seems like it would be so fun to go back and revisit the world and characters, especially since so much time has passed. We could figure out where they are and what they are doing in life. I think it would be so fun,” Hess says with utter enthusiasm. Here’s hoping to more quesadillas (no matter how you pronounce it) and adventures with Uncle Rico.