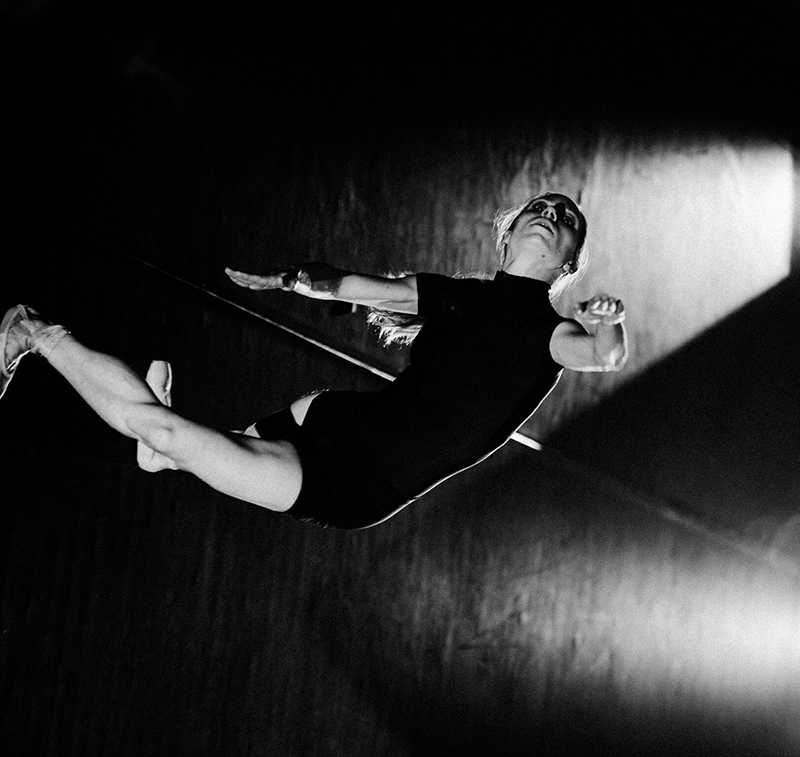 For over two years, NOW International/Interdisciplinary Dance Company has endeavored to expand the range and complexity of contemporary dance in Salt Lake City. NOW began as the attempt by artistic director Charlotte Boye-Christensen to rescue dance from the confines the traditional auditorium, stage and stage machinery – which in recent years has come to be considered more a place of entrapment than free expression.

With the help of numerous collaborators, including co-director Nathan Webster, NOW has swiftly developed into a loosely defined but tightly connected community of artists representing a variety of disciplines, a community with perhaps nothing in common but each member’s determination to burst the partitions of traditional genres and institutional spaces.

This collective endeavor has yielded a series of highly singular site-specific performances. While these events still remain focused primarily around the bodily medium of dance, increasingly they have come less to resemble standard dance performances than veritable ‘happenings’ of the sort instigated by provocateur Alan Kaprow in the 1950s. Kaprow’s happenings emerged not from standard scripts or choreography so much as sets of basic parameters meant to force unpredictable, absurd, and liberating outcomes.

Other local dance companies (in particular, SB Dance), have opted to accept and explore the innate potential of the theater space’s confinement and restriction. Consequently, SB’s latest work has taken the form of a lubricious incursion into the world of S&M aesthetics and extreme affective states. Here, the point seems to be to embrace the stage as kind of dungeon, one which in fact turns out to be an intractable labyrinth of indefinite intensive space. Within this dream topography SB Dance has forged a choreography of aberrant desires and bodies paradoxically liberated through the disciplined use of ropes, cables, chains and other forms of restraint.

Meanwhile, NOW ID has taken a diametrically opposite approach to the confines of the stage, using a diversity of means and mediums to throw upon the performance site, to give dance greater freedom to move and breath within a more extensive space. The latest creation by NOW is Nowhere, a highly collaborative performance combining not only modern dance with classical ballet, but also dramatic ambient lighting, large-scale theatrical props, video projections and live musical performance. In this instance, the specific site chosen by NOW was the Gardiner Recital Hall at the University of Utah. The piece utilized the space not only for its unique and impeccable acoustic properties, but also for its massive pipe organ, which figured prominently, both sonically and architecturally, within the performance. Additionally, an informal spoken-word and musical presentation, as well as a proximate sound installation—both of which preceded the introductory greeting and remarks by Nathan Webster—served to blur the boundary separating the performance proper, both temporary and spatially, from its surrounding environment.

The basic experiment of Nowhere seems to have been to find a way to transform the performance space from a fixed location—a literal “set”—into a site of continuous transition. The inspiration for this reimagining of the stage was a recent journey untaken by local artist and CUAC curator, Adam Bateman. Whereas the choreography of SB has striven to liberate bodies and characters from fixed identities, NOW aims instead to show the creation and consolidation of identity, the formation of character through conversion ordeal. This summer, Bateman, over a period of two and a half months, retraced the steps of his pioneer ancestors, who trekked from Nebraska to Utah in 1847. Not a dancer himself, Bateman figured as an undeniably odd presence in the performance, appeared throughout the event in a striped outfit evocative not only of the prison garb seen in antique photographs of early Mormon polygamists, but also of the bizarre costume designs of 19th century experimental dramatist Alfred Jarry, in particular those created for his outrageous and groundbreaking Symbolist drama Ubu Roi.

In order to facilitate a sense of Bateman’s linear march within the confines of an immobile space, the stage design centered around a large wooden treadmill. This permitted Bateman to stride continuously forward while remaining essentially in place. Further, it brought to mind the wooden odometer designed by pioneer William Clayton to measure his party’s progress across the plains. Finally, the wheel, approached at various moments from an oblique angle, also figured as a kind of wheel of fortune and a virtual portal simultaneously separatinh and connecting opposed regions of symbolic space and time.

Ambiguities such as these offered the audience plenty to contemplate over the course of the brief but unusually rich and energetic performance, as did the fine work of modern dancer Tara McArthur and classical ballerina Katherine Lawrence. The Boye-Christensen’s choreography involved impressive instances of partnering and solo performance, and provided a sufficient quantity of lively artistry to keep any audience member attentive and satisfied.

No doubt, certain persons might find Nowhere’s overall design excessively diversified, disjointed, and, ultimately, overwhelming—not entirely unlike the engulfing multi-screen extravaganzas staged by Ray and Charles Eames at world expos in the 1960s. Nevertheless, it would be wholly unfair to fail to appreciate the conviction and courage motivating NOW ID’s effort to use 19th century history as a unlikely vehicle for transporting local dance and its audience, finally, into the 21st Century.

NOW ID presented Nowhere July 17 and 18 in the Gardiner Recital Hall on the University of Utah Campus. While NOW’s official website currently offers no information regarding upcoming events, there is little doubt that future productions will continue to reflect the company’s ongoing effort to remove dance performance from its position of splendid aesthetic isolation and integrate it more fully within the broader arts community and regional context which situate and sustain it.