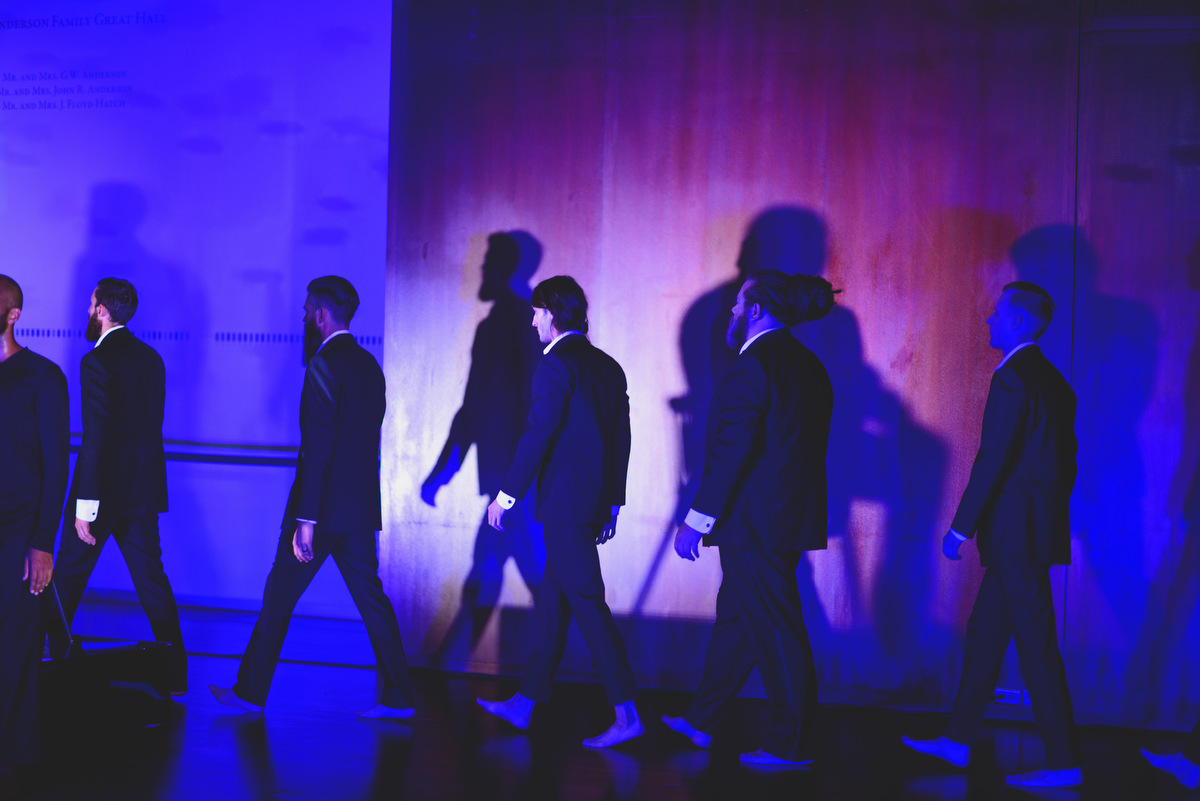 “The desire to understand and be understood is at the core of human experience,” writes Charlotte Boye-Christensen, NOW-ID’s artistic director. “Every gesture opens a fleeting vulnerability with opportunities and dangers of self expression.” This is the heart of A Tonal Caress, an experimental performance art and dance piece produced by NOW-ID and V-Project that was shown at the Utah Museum of Fine Arts this last weekend. The show combined dance and sign language in the context of communication, and it highlighted the ways humans can feel both connection and disconnection and how our modes of communication foster that space.

When you enter the UMFA, the performance has already begun: At the corner staircase leading immediately up from the entrance, you see several men dressed in suits facing you. Each of them are standing on different steps and are synchronized in their movements, standing still but staring ahead, covering their mouths or eyes, changing position every few minutes. They have an ominous presence, and besides blocking our ability to go upstairs, their slow, methodical movements create a sense of unease.

From here, we lead into a large room circling a man sitting on a chair, itself on a small platform. It looks like a soapbox, and it’s not until the performance starts that the man comes to life. This is Walter Kadiki, an Australian deaf poet. His presence is silent but commanding. Over the performance, he signs three poems, each in Australian Sign Language. The first and third poems are also presented in American Sign Langauge and spoken by David Kranes. Kadiki’s first poem, “Plod along is what I must,” meditates on perseverance and focuses on movement through adversity. “Though this ill wind may howl / May gnaw, / Snarl, / Taunt— / Though it may toss me around and around and around / With its fangs of malice / Sending incessant cold slithering shivers of pain through my spine / Plod along is what I must!”

As Kadiki signs and we hear Kranes, Jo Blake enters the stage, and we are now experiencing three simultaneous channels of communication: sign language, spoken word and dance. What struck me was how these different mediums were more or less legible depending on your physical position within the room (seating made it hard to see), your abledness and your impulse to try and separate the channels—something I caught myself trying to do often. Kadiki is an alluring signer, and his position on the platform makes him the most easily visible actor. However, I don’t know Australian Sign Language (much less American), and so for the first poem I relied on the spoken word recording played over Blake and Kadiki. It was the second poem, “A Deaf Plague,” where I was forced to reconcile dance and sign. Though sign language is a language with definite meaning, as someone who doesn’t sign, I gravitated toward exclusively watching Blake and Sydney Petitt dance together—I could interpret and draw meaning from the dance, despite there being no fixed, literal interpretation there. My reliance on static symbols was flipped on its head.

As Blake and Sydney dance, they try and imitate each other’s physical form, encapsulating the other, sometimes trying to be so synchronous that they drape themselves over another. But the dance becomes less about the synchronicity as much as the feeling of being in tune. Yes, dance is often physically and even emotionally intimate, but here it felt amplified because of intense gaze the two held with each other, watching to see where the other will go, whether they will run or walk. They take each plunge together, always keeping eye contact, as though they feel reassured.

As Blake and Petitt leave, Liz Ivkovich takes the stage, and it’s a bit sudden. Her movements feel bug-like and alien. She is bathed in red light, and the stage is, overall, darker. Kadiki watches her and eventually starts interacting with her—in a sense. He signs and moves his hands, presumably communicating, and Ivkovich feels like an extension of his signing. It’s then that four men enter the stage and walk across it, confidently, in a single file. They circle Kadiki, and one of them touches him. Again, the lines of communication become blurry: Kadiki signs and reacts to the touch, but is he communicating with the men? Is he communicating with someone or something we cannot see? He seems to be pleading or negotiating. The women from before passes by the men, looks at them and continues on. She has already “spoken” with Kadiki.

“While we as humans share a symphony of language, touch and fleeting looks that are truly remarkable,” writes Boye-Christensen, “it still seems inadequate in the face of the infinite complexities between individuals and societies.” This juxtaposition of what is possible to communicate versus what we can reasonably expect another person to understand, this is the space in which A Tonal Caress plays. As the performance continues, the seven men from the beginning come to the stage and walk across. They mirror Kadiki’s simple hand movements. Eventually, they ascend a staircase and watch the other dancers from above, their gaze hanging over the rest of the performance.

Near the end, a video is projected onto the massive back wall. It’s recorded footage of what looks to be a massive flock of birds. They fly as a single mass, joining and rejoining each other. They, too, look down on our dancers, moving with the erratic sensation of separation and connection. It’s yet another medium, another opportunity to feel seen and unseen.