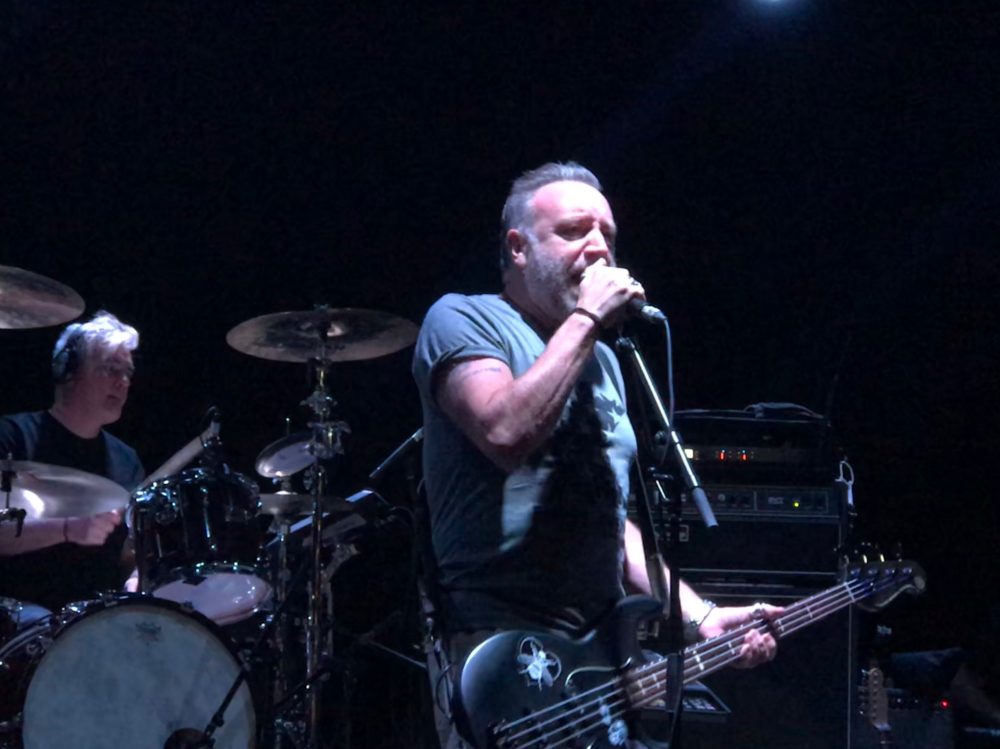 I had the opportunity to see New Order at 2005’s Coachella festival. The 11-song set included Joy Division tracks “Atmosphere,” “Transmission” and “Love Will Tear Us Apart,” along with a smattering of New Order hits “Regret,” “Bizarre Love Triangle,” “Crystal” and “Blue Monday” and contemporary tracks “Krafty,” “Jetstream,” “Waiting for the Siren’s Call” and the oddly placed “Hey Now What You Doing.” New Order had the reputation of being something of a disappointment live, but I enjoyed the performance. Still, the brevity of the set made the experience feel incomplete. For every song they played, there were two that I wished to hear.

When Hook split from New Order in 2007, I forced myself to come to terms with the fact that I wouldn’t get to see many of my favorite songs performed live. New Order’s Substance, a collection of 12″ singles and their B-sides, had been one of the first albums I ever owned. It, along with The Cure‘s Disintegration, Depeche Mode‘s Violator, Love and Rockets‘ Earth, Sun, Moon and The Smith‘s self-titled debut served as the bedrock of my musical education. Music was my life and New Order were a massive part of it.

My appreciation for Joy Division came a few years later as I worked my way through the group’s catalog backwards. In time, Closer and Unknown Pleasures would become favorites as well.

Of course, New Order reformed without Hook and eventually released the incredibly good Music Complete in 2015. But, and there’s no way around this, without Hook’s trademark bass, the album didn’t feel like a proper New Order release. There are numerous bands that have made seamless transitions following lineup changes, but try as he might, Tom Chapman will never fill Hook’s shoes.

While New Order played to massive crowds, Hook booked much smaller venues and explored the songs that he had helped to write some 30 years before. New Order played sparingly while Hook toured relentlessly.

For years, Salt Lake failed to attract Hook or New Order. That changed in November of 2016 when Hook brought his Substance tour to the Urban Lounge. There was certainly a sense of trepidation as I walked into the venue that night. Was I cheating on New Order? Was this going to be like watching Michael Aston and his army of session musicians dispassionately slog his way through Gene Loves Jezebel‘s material?

I needn’t have worried. The set was fantastic and Hook’s band, which is essentially Monaco, one of Hook’s side projects, with the addition of Hook’s son on bass, was up to the task.

Walking into the Metro Music Hall on Tuesday, there was no sense of discomfort. I knew what I was in for and I knew that I’d leave happy. I also knew I’d get a better look at the stage considering the radical differences between the venues.

The set list wasn’t much of a mystery. We’d be hearing the 12 tracks from New Order’s Substance and the 10 songs collected on Joy Division’s Substance. In 2016, Hook played an additional seven songs. Tuesday, that was reduced to an additional three tracks, but each of the bonus tracks weren’t played during their previous visit.

The set starts with “Too Late,” a track pulled from New Order’s 1982 Peel Session and that was never recorded in the studio. Mid-song, Hook calls out a photographer who is sitting atop the barrier between the stage and the audiences.

“You’re a comedian, aren’t you? There are people who paid for this show.”

At the end of the song, Hook, already in top form, suggests that we ask God why the song never appeared on an album.

The second song of the night is “Dreams Never End” from New Order’s debut album, Movement.  Hook sang the song on the album, so its inclusion in the set makes perfect sense.

From here, the band launch into Substance. The songs are performed in the order they appeared on the original release, kicking off with “Ceremony,” “Everything’s Gone Green,” “Temptation,” “Blue Monday” and “Confusion.”

To this point, the songs sound as you’d expect with guitarist David Potts providing additional vocals to tracks where Hook’s baritone couldn’t reach.

With “Thieves Like Us,” the set takes on a rougher edge that continues on through “The Perfect Kiss,” “Subculture,” “Shellshock” and “State of the Nation.”  Electronic music often has the reputation of being too polished, but that rarely applied to New Order and that certainly doesn’t apply to Peter Hook and the Light. They’re an explosive live act that feeds off the energy of the room, and that night, there was an extra bit of swagger that made its way into middle portion of the set.

The first half of the show concludes with “Bizarre Love Triangle” and “True Faith.”

After a brief break, the band return to the stage and launch into “Means to an End” from Closer and Disorder from Unknown Pleasures. The reckless brilliance that dominated the second half of the New Order set has returned, and it suits the material perfectly.

“Warsaw,” “Leaders of Men,” “Digital” and “Autosuggestion” build to a passionate climax in “Transmission.”

“She’s Lost Control” rattles across the room before transforming into “Incubation.”

The band soars through “Dead Souls” and Hook dedicates “Atmosphere” to Ian Curtis before closing with “Love Will Tear Us Apart.”

Hook rips off his t-shirt and tosses it into the crowd triumphantly as he leaves the stage.

Apparently Hook has eyes on touring New Order’s Technique and Republic, an exciting possibility, but I’d like to take this moment to remind him that Revenge‘s One True Passion, Hook’s side project from the early ’90s, was a fantastic release and that Monaco had their share of great singles. Maybe a set that celebrates all eras of his career could be considered.