I hastily rushed around the corner to the entrance of the venue, where I heard Keith Morris singing the lyrics to “Poison City.” I walked onto the dance floor, which already reeked of alcohol and BO, and admired the two-man mosh pit that was going on. 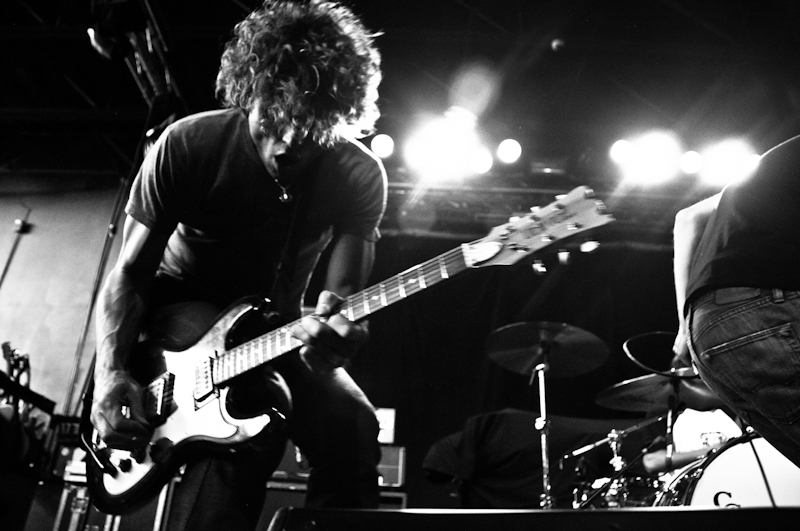 OFF! opened for Bad Religion at In The Venue, playing a stellar punk rock set. Photo: Gilbert Cisneros
I hastily rushed around the corner to the entrance of the venue, where I heard Keith Morris singing the lyrics to “Poison City.” I walked onto the dance floor, which already reeked of alcohol and BO, and admired the two-man mosh pit that was going on. The crowd consisted of a lot of older punk rockers who clearly had a couple of beers in their system and younger, Mohawk-bearing teens sporting patched-up vests. Seeing OFF! live is always fun, because the crowd loves getting Morris to rant—whether it’s haggling him to play Circle Jerks songs, poking fun at his old age, or recalling times when they saw him perform 30 some odd years ago. “Oh, you saw us back in ’86? Well it looks like the boy has grown up … and put on more weight and balded a little, as well as grayed a little too.” As much fun as it was to hear Keith “Monotone” Morris ramble about bullshit, you always had the one guy in the audience going, “Play some fuckin’ music!” Morris replied, “Don’t worry, we got ten more songs to play. You’ll get your music, and Bad Religion will be here in 10, 15 minutes after us to kick your asses.” He would go on how he had known Bad Religion since they were “little” boys and that now he seems to be the quintessential punk rock grandfather figure. OFF! blazed through the rest of their set with songs like “Panic Attack,” “Borrow and Bomb” and “Upside Down” and the pit gradually got bigger, to which Morris commented, “It’s all just a warm-up, people. Bad Religion in 15 minutes,” and he walked off the stage.
The room echoed of reggae playing over the speakers, most likely to keep everyone chilled out before the punk rock storm hit again. I conversed with some of my punk rock friends on what to expect from tonight’s set as well as what we thought were the best shows that happened in SLC over the past year. Naturally, I had high expectations for this show—I had seen Bad Religion four times already and they’ve always been a blast. The butterflies of anticipation built up in my stomach as the lights went out and some trance-inducing music started to play. After about a minute of that, the crowd gave a welcoming roar when all five members walked onto the stage. And maybe it’s just me, but when Bad Religion opens up their set with a live rarity like “Spirit Shine,” it can only mean that their set will consist of other underrated, underplayed and underappreciated songs that were pulled out of the depths of their discography for tonight only. After they played monsters like “Supersonic,” “Stranger Than Fiction” and “Kyoto Now!” Greg Graffin warned that we will be getting a radically different setlist tonight and jumped into songs like “New America,” “The Hopeless Housewife” and “Skyscrapers.”
The set continued back and forth between old classics like “Recipe For Hate,” “I Want to Conquer the World,” “Modern Man” and “No Control” to new favorites like “Fuck You” and “Dharma and the Bomb.” However, like Graffin had promised, the majority of the set were songs that rarely, if not ever, get played live. Case in point, “52 Seconds”—the album opener to 2007’s New Maps of Hell, played back to back with “Heroes and Martyrs.” They even threw in songs like “Change of Ideas” and “Sanity” to flirt with their fans’ nostalgia. Naturally, they saved all of their famous tracks for the end—people danced hard as they sang along to the choruses of “Do What You Want,” “Infected,” “Sorrow,” “Generator,” “You” and “American Jesus.”
The whole crowd knew that there were at least two more songs that had to be played—by now an encore for Bad Religion is almost a show standard. After the united chanting of “One more song!” they stepped onto the stage again with Jay Bentley teasing the audience by saying that they’ll get more than one song, and proceeded into the ominous bass line of “Fuck Armageddon… This is Hell.” “Fuck Armageddon” is always a fun one to hear live—the pit had doubled in size once the song picked up and the audience simultaneously screamed the chorus at the top of their lungs. But how would Bad Religion close a set like this? How would they end a setlist of so many of their underplayed songs? Close it with the underrated “Fields of Mars” of course! It was wonderful hearing a bunch of tracks that Bad Religion rarely play live—it’s very easy for a band that’s been around for 30+ years to keep their setlist from being redundant, but with a repertoire as vast as theirs, I think it’s safe to say they’ll never play the same set twice.
Check out more photos from the show in Gilbert Cisneros’ gallery.
Photos: