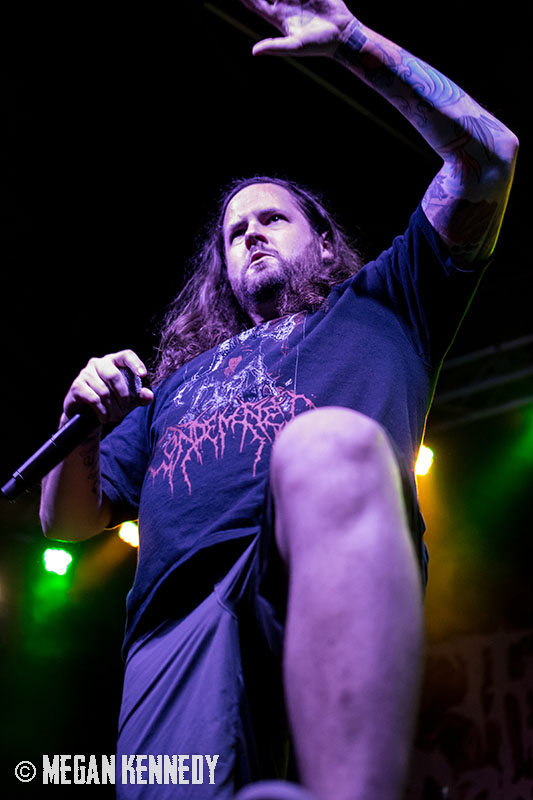 This was the variety show of the season, no doubt about that—with The Black Dahlia Murder, Iron Reagan, Harm’s Way and Maruta. I hadn’t been to the Complex since Adam Ant came a few years ago. I walked into their smaller venue—which is by no means small. A warehouse, the room was peppered with punks, metalheads and people like myself, who forgot to bring their mom-stitched denim jacket with patches.

Opening up the show was Maruta, a grindcore band out of Orlando. Based on their logo, I was expecting more death in their sound. What I found was a blast-beaten, doom-soaked trio of badasses. Mitchell Luna growls from the depth of his bowels an incoherent medley of misanthropic wishes. Songs like “Barren Oceans of Infinity” and “Stand in Defeat” would make them feel right at home in the Intermountain Mecca of grindcore. Had this been a home show or a place where the band isn’t on a raised platform, the room would have ignited into pandemonium. They closed out their set and I’m pretty sure Danny Morris (drums) spontaneously combusted near the end—the fact the dude had fills in his impossibly fast blastbeats makes him eligible for the Nobel Peace Prize in drumming.

Up next was my hardcore-metal-sXe man crushes, Harm’s Way. I got to interview Chris Mills, the drummer of Harm’s Way a couple years ago about their EP Blinded and talk about how awesome they are. First thing you notice is that James Pligge, their lead singer, is built like Gordon from Thomas the Tank Engine. The man threw punches in the air as he growled and you could hear the oxygen scream in fear, trying to get away from his fists. The second thing you noticed was how much they enjoyed playing together—there was never a dull moment between them. They’ve been playing together for a few years now and they’re hitting it big right now on the national stage with their truly unique sound. Right now, most bands are trying to make it as a variation of Converge, but Harm’s Way is paving themselves a new path. Their set consisted of a mix of Blinded and Rust and it was everything I hoped it would be.

I went outside in between sets for some fresh air and rain to cool me down from the heat of the crowd. By the time I walked in, the stage was set for dystopian America, draped in killer cops and crumbling government—but that would never happen. The crowd bunched up along the gate as Iron Reagan took on the stage. I saw these guys play a smaller venue last time around—it was exhilarating, and this was no exception. The enthusiasm for Iron Reagan was through the roof—the circle pit began to grow in the background as people did a few laps during the song and collapse into the crowd ahead of them. I could feel my throat grow hoarse as I shouted arm-in-arm with my fellow crossover lovers. They played my personal favorites “Your Kid’s An Asshole” and “Miserable Failure,” a 23-song set in what I’m guessing was 30 minutes.

Closing out the show was The Black Dahlia Murder, the death metal legends from Michigan. I have to admit that I was simply unaware of their music—there never was an opportunity for them to catch my ear. However, fellow SLUGer Megan Kennedy interviewed Trevor Strnad before the show and gave me a nice 101 of their sound. I must say, they’re are one of the best performing bands out there. I’ve seen punks in droves clamor onto the stage and fight barefisted for the mic, I’ve seen people fold atop each other like a baker does dough; I’ve felt the weight of five different people pushing in seven different directions in a four foot radius—I have never seen this. Strnad is a composer, a warlock, a god to the audience. In a sea of fetid human flesh, he is Poseidon, ruling atop the waves of skin crest and flow, crashing against the metallic stage cliffs. In the center, there was a limb whirlpool with a syncopated smack of skulls and tailbones tempest against concrete. Strnad wills the mass forward as lurid incantations from the stage. I didn’t know a single god damn song, but I was there with the rest of them.  Unashamed, I threw up the horns on a number of occasions—I was entraced by the symphonic quality and sophistication of their melodies. Fair reader, I was bewitched under the beautiful metal spell that The Black Dahlia Murder cast, and am now in love.

Check out Megan Kennedy’s full gallery of photos from the show!