00:00 / 18:49
Spotify Stitcher
RSS Feed
Share
Link
Embed
Impact Hub is a web of exceptional city folk who relish in the idea of working close to other individuals in their community from widely varying fields. 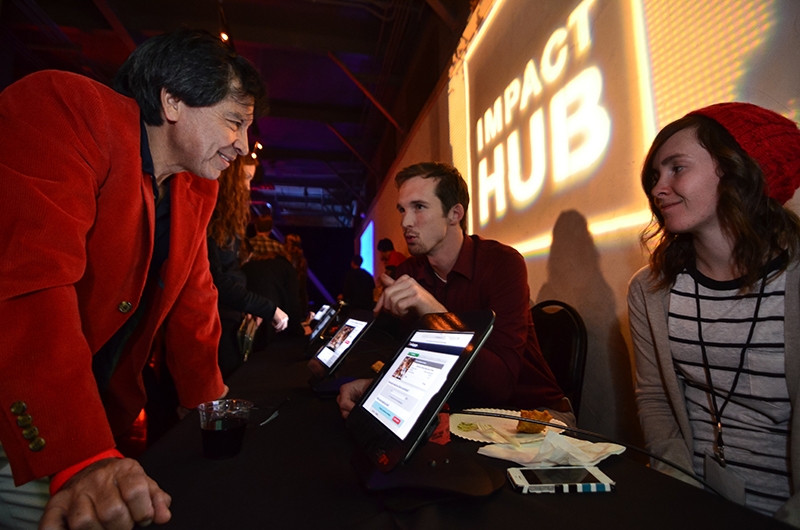 Impact Hub is a web of exceptional city folk who relish in the idea of working close to other individuals in their community from widely varying fields. They are constructing a building with multiple rental workspaces in order to create cohesion between all the domains that promote a better Salt Lake. The crowd funding campaign, launched at midnight the morning before the party, Thursday November 14, is on track to help Impact Hub achieve their dreams of creating a space so this vision can flourish. I spoke with co-founder Soren Simonsen about the objective of the party. “This is our official launch party. We’ve had people signing up all day to become members, founding members, supporters and backers. We’re on target to raise $10,000 today and our goal is to raise $50,000 by the second week in December. This is part of our financing to help build out the Hub space,” he said.

This year, between April and November, was a phase that I like to call the “Season of Change.” In eight short months, the face of young entrepreneurial spirit has metamorphosed for Salt Lake City from the “old-school” suit-and-tie style to a more integrated networking approach. This was a transformation long in the process, but the real explosion of spirit began this spring.

The event, on the surface, was a concert highlighting some of the best in local music, a great mingling crowd and some delicious Indian food. Underneath, however, something even more magical was happening: crowd funding. Crowd funding is an Internet sensation that serves as a forum for organizations to put up information about their cause online and raise money from digital donations. Impact Hub decided to use Indie Go Go as their crowd funding website and by the end of the evening, it had paid off.

After a long stroll around Pierpont Place, full of countless unique young professionals and a slew of familiar faces, I ended up directly in front of the stage as Pablo Blaqk went on. He somehow simultaneously managed to growl, wail and croon as he picked his acoustic guitar through originals and some well chosen covers (ex: “Give Me a Reason to Love You” by Portishead). While he was singing, I looked around the party and realized that the more time that went by, the more people were making friends and future business partners. One of the most important aspects of “new-school” business is the ability for friends and business partners to align.

After a rotation of featured performances from friends of Blaqk, he gave a heartfelt speech about community involvement, the importance of art and the relevancy of Impact Hub’s concept. This was balanced by nods of agreement and a general look of ecstasy on the faces in the crowd.

Between his set and the next, I listened to a succession of three-minute talks given by movers and shakers in the community such as Ben Bolte (Greenbike) and Dustin Haggett (Impact Hub). Each person gave a distinctive perspective on city unity and the importance of working together for a common goal. Reiterating the theme of the evening in so many different ways allowed me to understand the goals of the Impact Hub and my friends and colleagues in a way I never before thought possible.

Before the next set, Westward the Tide, I spoke with band-mate Jordan Towner about the importance of organizations like Impact Hub and the role they play in creating a new face for commerce. “In Salt Lake we have a hub of smart, industrious young people that are making huge headway by not going the ‘old-school’ route in business. They do this by using their artistic abilities and creative minds. Creating a place like this where they can get together and share their talents is the future for business not only in our country but around the world,” he said. We also discussed the integration of art into local business. “Art, whether it’s music, photography, painting or graphic design, is starting to become more and more appreciated by our society. You see a lot more people making money by using their art. More art is now used in marketing than ever before in the past,” he said. This point was proven by the very existence of the party we were at. An entrepreneurial rental space was being directly marketed for local music.

Afterward, Westward the Tide took the stage and enveloped the crowd in their happy, indie-folk style. Harmonizing by the two lead vocalists was absolutely gorgeous and complemented their wistful technique perfectly. They, in support of all the other eloquent speakers of the evening, talked-up Impact Hub, and focused on the importance of donations to keep a community running. By this time, the donations on the large, glowing wall projection had reached $9,000.

While a third group of speakers took the stage, I spoke with a fellow partygoer Travis Hysell, organizer of the Legacy Initiative, about creating a network of local doers to make your projects flourish. “When you’re trying to start something new, you’re inexperienced and unconnected. This [Impact Hub] gives small business owners, entrepreneurs and non-profits a leg up and an advantage you wouldn’t normally have,” he said. We then discussed how the youth, specifically, are implementing change into business practices. “They exhibit a different thought pattern from generations gone by. Previously people were very happy to take a job with ‘x’ company and work there until they own their gold watch. They were fine with forming themselves as a person to fit the company’s needs. Nowadays, I see people that want to work in an area they are passionate about,” he said.

I made it back to the front just in time to watch Luna Lune enter the stage. They were a grungy-rock band fronted by a powerful female singer. I was impressed yet again by the rampant talent of the Utah music scene. After a series of vigorous, soulful numbers, they focused once again on the importance of community. Simultaneously, a volunteer for the Hub was walking around asking for final donations. I made a second donation of $10 and became a member, a fact I will proudly flaunt for months to come.

To close up the party, they raffled off items ranging from heavy-duty portable speakers to a set of skis. After final remarks and thank-yous from the Hub, they directed attention to the donation projection to show that they had made their goal of $10,000. I picked up another beer to celebrate and gave congratulations to both Simonsen and Haggett. I left that evening feeling, as Charlie a la Perks of Being a Wallflower put it, infinite.