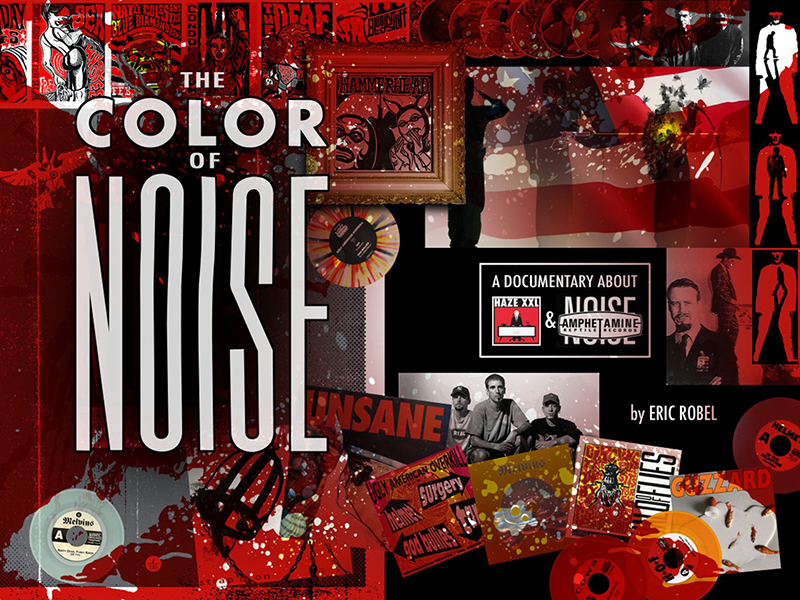 The Color of Noise

When I think about the independent record labels that dominated my left-of-center music tastes in the 1990s, certain labels made a more lasting impact than others. At that point in history, established labels like Dischord and Epitaph had either “sold out” or had shifted their focus to more regional titles. This is how it seemed to me, anyway. As I chased after record labels that spoke to me and my need to consume noisy, unbridled garage-punk music, I ended up staring the devil directly in the face. The devil, as it were, took the form of four separate labels that grinded out gorgeous music: Sympathy For The Record Industry, Estrus Records, Touch and Go and Amphetamine Reptile. Each of these labels was led by a strong personality: Long Gone John, Dave Crider, Tesco Vee/Corey Rusk, and Tom Hazelmyer, respectively. They seemed to focus on music that no one else cared about, and their legacies remain strong. If it weren’t for Sympathy, there wouldn’t have been a White Stripes. Estrus brought us Man or Astro-Man? and the Mono Men. Touch and Go slayed us with The Jesus Lizard and Laughing Hyenas. And AmRep assaulted our entire souls with bands that were too far out there for any of the others – bands like Hazelmyer’s own Halo of Flies, as well as the Cows, Lubricated Goat and Helmet. Today, more than 20 years after the fact, we’ve started to look at the legacies left by these labels and their owners. The Color of Noise tells the story of Tom Hazelmyer and Amphetamine Reptile Records.

The release of The Color of Noise coincides with an onslaught of new AmRep releases and reissues. The film’s soundtrack will debut as part of Record Store Day’s Black Friday sales. A first wave of reissues is also slated for around the same time, including the first vinyl edition of the legendary Halo of Flies’ Music for Insect Minds on double LP, the Cows’ classic Cunning Stunts, and a 3 LP set of the infamous Dope-Guns-‘n-Fucking in the Streets compilations which featured Mudhoney, Helmet, Melvins, Tad, Tar, Superchunk and many more. These reissues are the first active stirrings of the mostly defunct record label for quite some time, and the record buying pubilc’s response to them will most likely influence what else gets thrown our way as AmRep plans for 2016 and beyond.

The film itself, in addition to being an interesting historical document, does an incredibly thorough job of laying out the origins and life span of Amphetamine Reptile Records. One benefit of most of these bands never getting very famous is that the members are still around and mostly seem willing to sit back and reminisce about the role they played in advancing the AmRep story. And it is an interesting story: from the early work on the Dope Guns and Fucking compilation records, to negotiating the sale of Helmet’s back catalog when they made the jump to a major label, and finally on to Hazelmyer’s work as a visual artist, restauranteur and gallery owner.

The Color of Noise begins with a Tom Hazelmyer origin story. He grew up in the Midwest and found like-minded punks and early bandmates at a young age. First was his work with a hardcore band called Todlachen followed almost immediately by Otto’s Chemical Lounge. Hazelmyer then finished high school and joined the Marines. While on leave he started Halo of Flies with his former bandmates. At this point he was married and stationed just north of Seattle— right as grunge music took off.  When the word got around that a member of Otto’s Chemical Lounge was living in the Pacific Northwest, the story of Amphetamine Reptile records really began. Early singles were produced by The Thrown Ups and Halo of Flies, mostly as a way to shop the bands to bigger labels. When he returned to Minneapolis after he got out of the Marines, he launched the label proper with the first Dope-Guns-and-Fucking in the Streets compilation 7”. As luck, or fate, would have it, one of the bands featured on the comp was Mudhoney, right as the buzz surrounding everything Seattle really started to hit hard. With the label came the need for a logo. Hazelmyer took a Hitler Youth eagle and removed the swastika in favor of a symbol for the Church of the Process, a church that believed that Charles Manson is the Messiah. The sword and hammer that the eagle clutched were swapped out with a baseball bat and a .45 handgun in homage to the Ramones and America. Finally the eagle’s head was replaced with a lizard’s, thus creating the first bit of AmRep’s iconic imagery.

Much of the rest of The Color of Noise tells the individual stories of bands that would find their place on the record label, splicing together vintage concert footage with video from the AmRep 25th anniversary show and modern interviews with band members. Considerable time is spent discussing the stories of God Bullies, the Cows, Lubricated Goat, Cosmic Psychos, Helmet, Boss Hog, and so many more.

One of the highlights of these interviews is the time spent talking about the origin of the Cows. Shannon Selberg (Cows, Heroine Sheiks), talks about how the band had dropped acid and rehearsed for years before finding any sort of an audience. Other highlights include discussion about the label’s predilection for Australian bands—mainly Lubricated Goat and the Cosmic Psychos. Stu Spasm (Lubricated Goat) was an incredibly entertaining interview, even though it became quickly clear that Spasm and Hazelmyer aren’t on the best of terms these days. With recording and booking tours there are still some wounds that haven’t healed between the two.

As The Color of Noise progresses we are introduced to more bands, some of whom would have never found a wider audience without the label’s help. We are shown some of the label’s successes: the wide reaching appeal of Helmet and the money that their success brought to the band and to the label, and the transition of Janitor Joe band member Kristen Pfaff to the much more successful band Hole. We also learn of the trials and difficulties that came with these successes, like the untimely death of Pfaff after pairing the addictions of her youth with major label money and opportunity.

As the film runs its course the lifespan of the label also starts to dwindle. Attention is paid to the art and artists that made the records so special and collectable. Coop, Derek Hess, Frank Kozik and Shepard Fairey all spend time talking about their positive interactions with bands and the Amphetamine Reptile machine. It almost seems like whatever Hazelmyer touched turned to gold.

After taking the scenic route, The Color of Noise eventually gets back to telling the story of Hazelmyer himself. As the era of purchased music died down, the label owner opened a bar/restaurant and an art gallery. He focused on spending time with his wife and kids and finding new ways to support art and music. He also suffered through a time of severe illness and rehabbed himself through creating visual art under the name Haze XXL.

In many ways the Color of Noise seems like three separate films. Then again, everything covered therein stems from one man’s quest to be adventurous and daring at a time when punk rock had gone soft and there were relatively few people left to stir the pot. And stir the pot he did—musically and visually—and while providing for the well-being and success of dozens of worthy bands and artists. At the close of the film one thing becomes clear: there may not be anyone as determined and bat shit crazy as Tom Hazelmyer left in the music industry. And this should make us worry about the future of the American underground.