00:00 / 20:24
Spotify Stitcher
RSS Feed
Share
Link
Embed
Ten burgers, mammoth beef towers the size of a human head, were carried gingerly on trays to our table at the bar and grill, Lucky 13. Last Wednesday evening this moment marked the beginning of the Lucky 13 Challenge, which had begun for five members of Hopscotch Outreach Arts Foundation, a new non-profit organization that empowers at-risk and underprivileged youth by harnessing their creative spirit in music, art, dance and film. 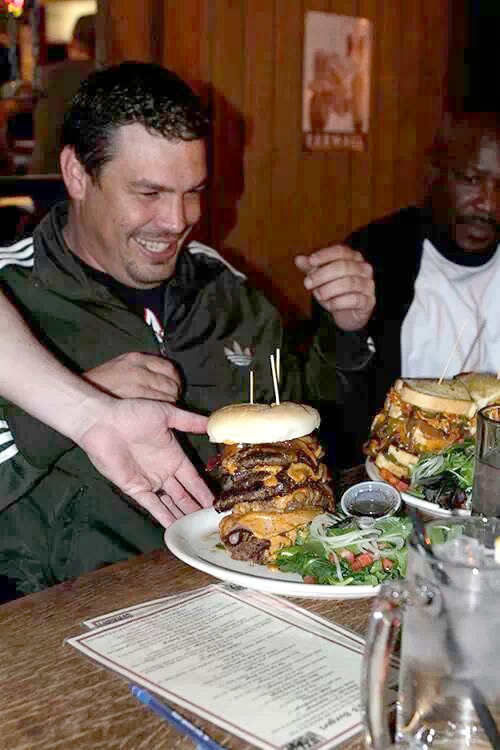 Ten burgers, mammoth beef towers the size of a human head, were carried gingerly on trays to our table at the bar and grill, Lucky 13. Last Wednesday evening this moment marked the beginning of the Lucky 13 Challenge, which had begun for five members of Hopscotch Outreach Arts Foundation, a new non-profit organization that empowers at-risk and underprivileged youth by harnessing their creative spirit in music, art, dance and film. The members intended to eat these sauce-infused meat mountains for cash in the name of charity.

The Lucky 13 Challenge is not for the weak of mind, stomach, or bowels. A contestant has one hour to finish not one but two monstrous burgers—a combined 42 ounces of beef. The 28oz Big Benny is served along with The Bear Burger (certainly the more challenging of the two) described on the menu as “14oz of Ground Chuck Topped With Belizean Habanero Puree and Roasted Habaneros, Then Stuffed Between Two Grilled Cheese Sandwiches which are Loaded with Sauteed Onions, Roasted Jalapeños And Roasted Habaneros.” One who successfully ingests these behemoths in one hour gets the burgers for free and takes home $200.

Five members of the Hopscotch team boldly—and naively—stepped up to the plate with the hope of taking $1000 back to their burgeoning non-profit. “I’m anticipating suffering,” said Tyler Malnerich, fundraising director, just before the burgers appeared. Malnerich was the instigator who bravely proposed the eating challenge to his co-workers. His preparation for the night was simple: “Over the last 48 hours I stretched my stomach with Mexican food, burgers, Filipino food and tons of milk,” he said. Youth Mentor & Sound Engineer Wesley Thompson, also attempted the stretch-the-stomach-with-milk technique while also preparing with rigorous calisthenics and a Crossfit routine. “I brought a cheerleader along to fight me through. And then I just plan on being completely ill before and after,” he added.

James Shakespeare, Hopscotch’s chief of operations, studied competitive eater Takeru Kobayashi’s ingestion techniques by watching Sports Center the morning of the challenge. “He dips everything in water,” Shakespeare reported. “So I got two glasses right here. I got one to drink for hot stuff, and I got another one so I can tear the sandwiches apart and dip them.”

Sound Engineer Joe Hernandez, who had flushed his system the night before with a fibrous can of baked beans, was visibly nervous pre-challenge. “The habaneros are going to take me down,” he said. Despite Hernandez’s jitters, President & Director Frazier Tedford maintained his optimism. “We’re doing it for charity,” he stated. “Hopscotch Outreach Foundation—this is the way we do it. We come together. We make it happen. The challenge is on.”

The burgers arrived. However, within 25 minutes, the reality of the 25 pounds of food seemed to weigh down spirits. Silence settled over the table except for the occasional exclamation of pain as jalapeños were devoured en masse. Salt was poured onto blistering tongues to alleviate The Big Bear’s intense burn. “There’s a reason there’s a liability form,” said the waiter, amused at the unfolding scene. He also revealed the harrowing fact that even though the challenge is attempted every week, only three people have succeeded (and two were eating professionals).

For a steady 40 minutes I watched as enough ground chuck to sculpt a life-size small child tested the human spirit. Burgers had been eaten but, somehow, food still stared lazily from each disheartened contestant’s buckling plate. It was a slow, painful and unfortunate defeat for the five Hopscotch team members. “I really thought I could do it—I’m having a paradigm shift right now,” said Shakespeare as he threw in the towel along with his co-workers.

A quick exit was made by the downcast contestants—to rolaids, to private toilets, their bulging bellies and jalapeño-battered mouths a true testament to their dedication to children. “It was a great cause and I’m really happy we all came together and did it. We did it for the kids,” said Tedford, whose steadfast performance throughout the competition placed him the closest to victory.

Although they lost this unpleasant food battle, Hopscotch will continue their fight for children. Their next fundraising event is set for December 28, a roaring ’20s Monte Carlo Night at the Red Lion Hotel Ballroom that will feature casino table games, raffles, a cash bar, a live big band, food and dancing.

Feel bad for the scorched five-some and want to donate? Go online to hopscotchoaf.org/index.html. You can find out more about the Lucky 13 Challenge at lucky13slc.com. ‎