SLUG Mag Soundwaves
Episode #395 – Cotes
00:00 / 18:06
Spotify Stitcher
RSS Feed
Share
Link
Embed
When I try to describe the Welcome to Night Vale podcast to people who have not heard it before, I hark back to the times of old radio shows. A time when families would crowd around the radio to listen to stories told strictly through sound, character development and plots that were easy to keep up with. It’s just like that, but it takes place in a town where nothing is as it seems, everything is scary and the government is terrifyingly awful (or awfully terrifying). 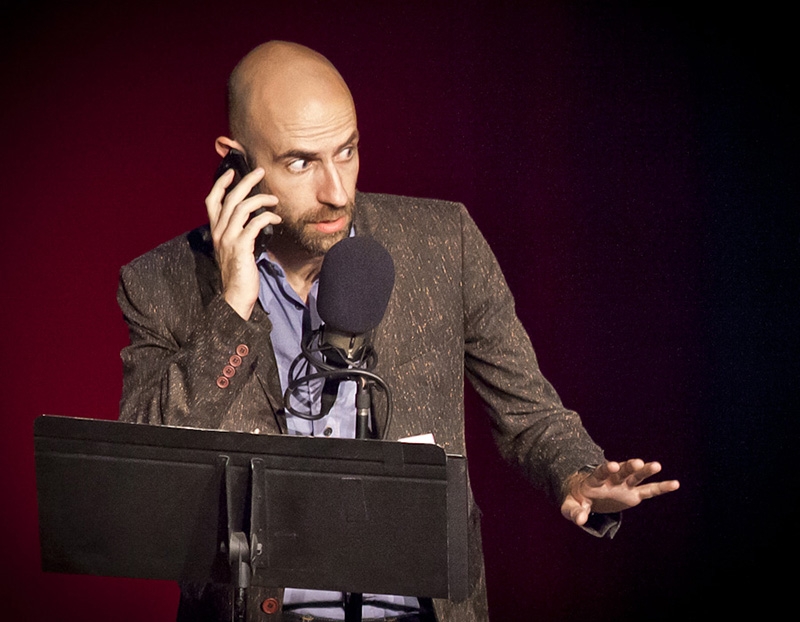 When I try to describe the Welcome to Night Vale podcast to people who have not heard it before, I hark back to the times of old radio shows. A time when families would crowd around the radio to listen to stories told strictly through sound, character development and plots that were easy to keep up with. It’s just like that, but it takes place in a town where nothing is as it seems, everything is scary and the government is terrifyingly awful (or awfully terrifying). Welcome to Night Vale, a twice-monthly podcast has grown into something even larger. Enough people have tuned into the weirdness and it’s developed such a fanbase that the creators of the show, Joseph Fink and Jeffrey Cranor, have taken the show on the road to put on live productions of the fictional news report. I had the opportunity to speak with Joseph Fink and Cecil Baldwin, the voice of Welcome to Night Vale and ask them all the fan-girly questions I could think of.

The show, eliciting creepy feelings since 2012, is a small production relying on not much beside imagination, a microphone and some editing software. Going back about four or five years, Fink, Cranor and Baldwin had met in a writing and performing class. The creators have backgrounds in theater, so creating a show and taking it on tour is something everyone enjoys. Podcasting is also a free service, so going on tour is a good way to make money while keeping the show free. Creating a show about a town where conspiracy theories are real and everything is strange allows for a bottomless plot, which allows the creators to write something new for each show. As Fink and Cranor create a new script for each town, they aim to present something the fans have never seen before and not rehash material. As performers, they understand that not everyone will have heard the show before and they want to give the newcomers enough information so that they can enjoy the live show as a standalone production.

There is something about the fandom though. It’s interesting to see the comments online about their opinions on Night Vale, as no two people are alike. I threw out the disastrous word “demographic” and Fink immediately rejected the idea that their podcast needed a demographic. When first creating Night Vale, they only wanted “a small group of people that weren’t friends or family,” he says, insisting they started making episodes for fun. “I hoped that someday, someone we didn’t know would listen. If you write something that is interesting to yourself, people will recognize something in there.” Particularly, though, women between the ages of 14 and 30 seem to be the largest group of listeners.  When asked about his reaction to things like fan art and cosplay, Baldwin says “I find it fascinating to see art that inspires people to create art. Something we have put our heart and soul into has inspired someone to create art in their own style.” I should mention that Baldwin has a voice that is deep, soothing, and ominous. While most celebrities will be recognized in public because of their looks, Baldwin will be casually engaged in conversation and someone nearby will turn their head to ask if he is indeed Cecil.

Speaking of fans, celebrities happen to listen to the podcast and voice their opinions on Twitter. This is how Welcome to Night Vale happened to land such incredible celebrity voices like Mara Wilson as the Faceless Old Woman Who Lives in Your Home and Wil Wheaton who appeared as an intern during a live performance. Interns for Night Vale, by the way, all mysteriously disappear or die horrible deaths while on location (much like the SLUG interns).

With a stories as rich as the ones Night Vale tells, there must be a backstory and history. Alas, when it comes to the mythology of Night Vale, Fink keeps his lips sealed. Night Vale contains a dock, but its landlocked. When I asked exactly where Night Vale was and the location of rival town Desert Bluffs, I received a sigh of “Well …” as Baldwin jumped in to say it is “somewhere in the American Southwest.” Fink tries to keep his fiction as vague as possible – the only known facts about Night Vale are the descriptions written in the show. They keep everything else open to interpretation. “If it’s not in the script, nothing much we can tell you,” he says, “I’m happy to leave it to fan fiction and the fan community.”
As a podcaster myself, I was eager to ask all of the technical questions. Creating so many unique and different storylines, I asked Fink if he happens to have a favorite. He continued to be a creative inspiration by answering, “It’s the work that goes into it and the satisfaction. It’s the ones I had to work really hard on that worked out.” Such episode arcs like “Story About You,” a standalone episode that tells a story from the listener’s point of view as he experiences a “weirdness” in Night Vale and “Cassette,”  a flashback episode that highlights a young Cecil before his time at Night Vale radio. Baldwin agrees that “Cassette” is a favorite episode of his, one that allowed him to play two characters: a younger and older version of Cecil. The process for creating episodes as they delve deeper into intertwining plot lines remains the same, even two years after creation. The small group of talent is fluid, Fink and Cranor will casually come up with an idea, occasionally looking back to previous episodes for plots and characters to develop, create a script and send it over to Baldwin. After combing through the script and getting his giggles over literary jokes and references, he will then spend time with a USB microphone and computer and record. The recording is sent back to Fink, edited together with music from Disparition and “The Weather” (a different song each episode submitted by an indie artist) and sent off to the Internet for eager ears.
Salt Lake City is one of the stops on the Night Vale American tour – surely an odd town so the crew should feel right at home. They arrive in Salt Lake one episode after the special two-part release of a live performance in New York City. Those episodes were a celebration of being in business for two years. From the sounds of the audience and their interaction with the performance, Fink, Cranor and Baldwin will undoubtedly put on a spectacular performance for the Salt Lake audience. The celebratory episode also announced that they will be touring internationally, hitting up Europe once the American leg is finished, solidifying their success not only here, but around the world as well.