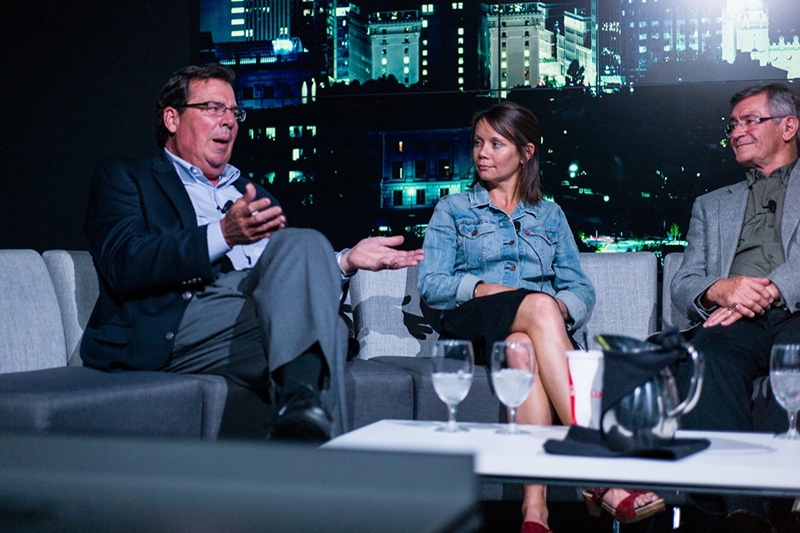 Trees are sprouting leaves, flowers are blooming and Bambi is probably running around the green grass of Mt Olivet cemetery with the rest of the deer that permanently reside there. With spring already moving into sprung territory, it is easy to forget that only a few months ago, there were reports of disastrous air quality due to the inversion—forcing all Salt Lake residents to breathe as many chemicals as the teenagers vaping outside Kilby Court.
The live discussion program, entitled What Do You Think, Utah? was held at the 50 West Club & Cafe. In the first of what will be a monthly series, Utahns got a chance to talk to a lobbyist, a politician and others on just what they think can be done about the soup bowl of exhaust fumes that Salt Lakers deal with every winter.
The format of this discussion was a kind of modified town hall meeting. Bill Allred, one of the hosts of the X96 morning show Radio From Hell, moderated the show, bringing his trademark lighthearted wit into what otherwise could have been a dry meeting due to the literally deadly subject matter. Utah’s air quality is a serious health threat, a fact that is not lost on most residents. In the opening portion of the discussion, a video was shown where random people on Main Street were asked what they thought was the most serious environmental threat that Utahns face. Of the people shown, here were their answers: air, air, air, inversion, air pollution, parks and air pollution, inversion.
The discussion touched on the fact that this issue affects everyone—and it crosses party lines. The disagreement begins politically when we ask what can or should be done about it. The discussion started off rather safe, but lines in the sand were quickly drawn, with a few political leanings coming out of the woodwork—reaching a climax when Bruce Baird, an attorney and advocate, called Republicans “poo-brained morons.” Just like most political discussions, the volume of the arguments increased along with ferocity as the designated hour elapsed, with Bill Allred attempting to keep the discussion friendly to all sides of the political spectrum.
Baird claimed that government regulation—which he says is a bad word to the Republican leadership of Utah—is needed for large scale change and implementation of tier 3 gasoline (lower sulfur). Rachel Otto, lawyer and executive director of Breathe Utah, added that Utah would need help from the EPA—not merely Utah’s legislature—for big changes. It was clear from the discussion that this problem is immense and the solution is unlikely to be simple.
Throughout the evening, it became clear that solving Utah’s air quality problem will take a combination of multiple different solutions, ranging from tax incentives to good ol’ fashioned sacrifice of things citizens have grown used to. There may be a day when it won’t be possible to do burnouts in a Camaro next to a trash bonfire while cultivating an enormous pompadour with aerosol hairspray (the dream of the ’80s).
Air quality is not a new issue in Utah. Former Salt Lake City mayor Ted Wilson (’76-’85) was one of the panel members. He told a story of how when he was a child in the 1940s, he was walking with his grandmother around 300 South and asked her why his eyes were burning. She told him that it was due to the smoke in the air. Various laws were put in place at the time to regulate burning to prevent this, but then widespread adoption and use of fossil-fuel vehicles came along—immune from wood-burning regulations—and decreased the air quality once more.
The consensus of this discussion—if there was one—was that Utahns are willing to take personal steps to help solve the problem, but will need some sort of incentive to help them do so—beyond the promise of simply being able to breathe easier.
The next program is planned for next month, and will be streamed live on their website. The topic will be police interactions with the public, and should be quite a powder keg of opinions.
Photos: