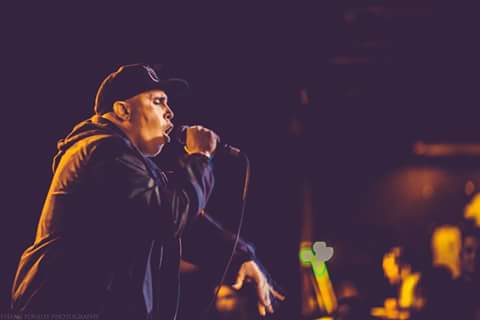 This week’s SLUG Soundwaves features local hip-hop artist Ryan Worwood, better known as Dusk or Dusk Raps. Dusk has been rapping for over 20 years and making beats for 10 years, and he is a lifelong visual artist.

For Dusk, it’s OK if he’s been working on his art for months and not making beats. It’s all the same to him—why separate the two creative forms? I think we can all say that we’ve had someone in our lives, at one point or another, tell us to focus on one thing. Dusk operates best by staying busy and doing everything that interests him rather than dropping other creative pursuits and focusing on one. “It all goes to the same place,” says Dusk. “I’ve been doing all this stuff longer than I haven’t … I don’t consider it to be something I do, it’s just a part of who I am at this point.”

“We all only get so much time. I want to spend my time doing what I want to do … It passes by too quickly,” says Dusk. When everyone is out and partying, he’s at home by himself working on his art, whether it be visually or musically. If things don’t go smoothly in other parts of his life, he has the comfort of knowing that at least he’s got this part locked down, and that’s what’s important to him.

When he finds himself getting scared, he knows that’s the time to get busy. Having to go through that uncomfortable learning curve is a part of the whole process and of growth. “There’s no substitute for time invested. If you really like something, what’s going to make it happen is really getting dedicated,” says Dusk.

Dusk does whatever he can to be encouraging to others who are trying to pursue their own interests and recognizes that there’s no need to be completive when we should all be supporting each other.

Dusk is performing on April 19 at Club X. Others on the bill include: King Magnetic & Ruste Juxx, Moe Hendrix, Black Socks, Clawson and DJ Intimin8.

For more information on Dusk Raps and his beats, check out his Bandcamp at music.duskraps.com.

Thanks for listening to SLUGMag Soundwaves.

SLUG Magazine’s mission is to provide an honest journalistic alternative to mainstream coverage of arts, music, events and lifestyle. SLUG adds value to lifestyle through community engagement. Available in print and digitally on slugmag.com.