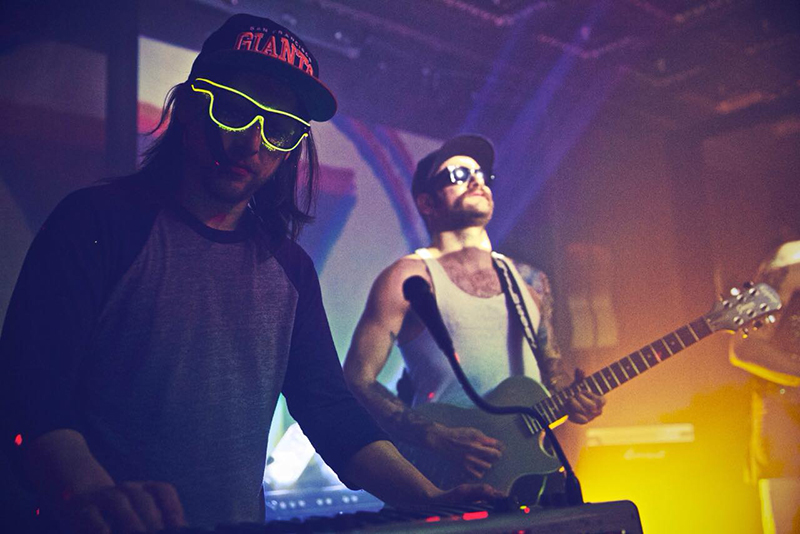 Stories about traveling in space, leaving the planet, dance parties and sex—these are the elements, combined with synth/electro-pop instruments and robotic vocals, that make up local band Telepanther. Keyboardist Brice Okubo and guitarist / vocalist Kirk Dath joined their forces to create music that wants to take you in and out of this world.

Telepanther graced the DIY Festival two years ago, splashing the stage with hypnotic visuals, unique makeup and tons of glitter—and they hope to do the same, if not more, this year. The musicians look forward to playing side by side with other great local artists. The band members both agree that one of the best aspects of DIY Fest is that the audiences are able to experience bands and art to which they would not have otherwise been exposed. “We get access to a different audience,” Okubo says. “There’s just nothing like it.” Telepanther plan to play older songs with some new flavor added in—such as adding the bass guitar into the mix.

Their music style—described by Okubo as “downtempo Portishead”—is repetitive in nature. As their new track suggests, however, the music is all about “stress and release.” This new track, recorded with B Side Studios in South Salt Lake, has a long intro that will be on the full-length album. The buildup begins stressfully, but as it builds, it eventually hits the perfect guitar sounds that soothe into release. “Stress and release is the feel of this song,” says Dath. “It represents a lot of aspects of life—also sex. It’s like the tide.”

Telepanther will headline at the DIY Festival on Friday, Aug 12 at 9 p.m. on the 90.0FM KRCL Stage. They will also be setting up a face-painting booth to encourage their audience members to embrace paint and glitter and dance with them during their show.