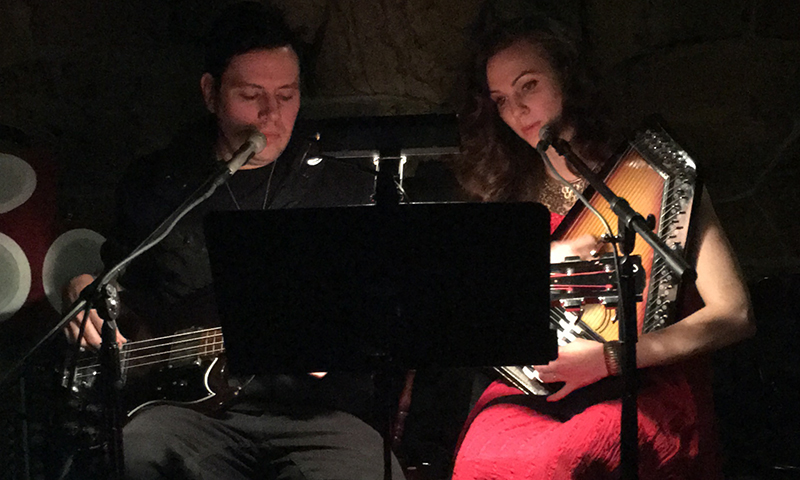 Salt Lake City is home to a new band that’s been hitting Twilite Lounge with the sweet-sounding auto-harp. Leena Rinne, drummer for the Purr Bats, started local-project Strummy Coo Coo with her musically talented husband, David Payne. Playing the auto-harp is merely one of Rinne’s many skills. Strummy Coo Coo boast a dreamy quality that is reminiscent of soft folk bands like The Swell Season. The auto-harp brings a music-box sound to the band, adding to their dreamlike feel.

Originally from Finland, Rinne moved to Utah and started high school in American Fork. “I grew up in a home that was very education-focused and intellectual-based,” she says. “The creative part was a bit more hobby-oriented. I took obligatory piano lessons.” Having been forced into learning music, Rinne wasn’t active in the music scene until she met Payne. Not much longer after that, she began playing in local bands Stiletto and SubRosa, and she spent a few years with Sea Monster. “Part of my process in becoming a musician was identifying myself as a musician,” she says. “I know musicians who, at their core, knew they were musicians since they were a child. Mine has been a bit more of a journey.”

Rinne plays the bass, the drums, the auto-harp, and a bit of guitar. “[The bass] was my first instrument and it is probably the one I play most,” she says. “I really love the drums. It’s a different part of my brain I feel like I use when I play the drums. It’s almost got a mathematical feel to it.” The auto-harp, a prominent instrument in ’70s folk bands, is the instrument that Rinne uses for Strummy Coo Coo. “Dave bought me one for Christmas,” she says. “It’s a fun instrument in that it’s so simple—there’s nothing particularly complex about it, but it’s got a sweet sound. The band that I play auto-harp in, it’s just Dave and me. It’s sweet music.”

Playing music is a priority not only for Rinne but for her entire household. “Dave and I have twin daughters who are 9 years old,” she says. “One loves playing the drums. The other kind of loves playing music, but would prefer to draw. Playing music has to be a priority. It just matters where you want to spend your time.” As a business consultant and the breadwinner for her household, Rinne has to time-manage her musical and professional careers with her personal life. “We have always talked about having a family band—and we’ll get there. Gotta get the outfits first!”

Check Strummy Coo Coo out at Twilite Lounge on Wednesday evenings, after 9 p.m.