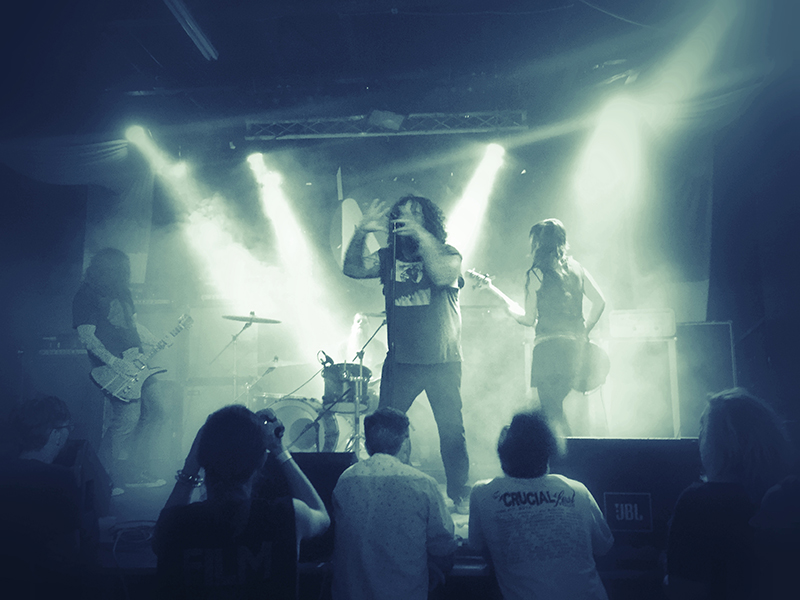 As a band that started nine years ago with every intention of becoming the world’s loudest band, INVDRS are currently making some noise around the country at various festivals this year—and their trajectory looks like it’s going to get even louder. Bandmates Phil White (throat), Dave Moss (guitar) Julie Stutznegger (bass) and Andy Patterson (mastering / recording) have been working on and refining a new album, to be released soon. A heavy metal band based out of Salt Lake City, INVDRS play loud, over-the-top music. “Some would say, ‘You guys are too loud,’” says White. “I would say, ‘That’s not even close to Motörhead—we need to be louder!’”

The crew recently arrived back in SLC after this year’s second annual Psychofest in Las Vegas. “We were literally booked by the booking agent because he thought we were a rad band,” says White. “I was blown away. It’s four days of amazing bands and nonstop partying—and one INVDR show.” Stutznegger comments on the energy of the festival, calling it a “convention of rockers” with an unending supply of great bands. As the second band to play on a Sunday afternoon, not only was it difficult for INVDRS to have their gear prepped and ready to go, but it also seemed difficult for the audience members to get up early on a Sunday after partying. However, things looked up for the band. “There was no one there for the first band,” says White, “but after we got onstage—I mean, it was bombarded with people who thought [we] were awesome!”

INVDRS is a band that is much more about the camaraderie than the fame. “There is no one in the band who is promoting ourselves,” says Stutznegger. “We’re really just playing together because we love it and we love each other.” INDVRS do what they love for each other, and also for the people of their hometown. “One of the best things about SLC is it doesn’t matter what kind of band you’re in,” says White. “The art community and music community supports each other so fucking hard.” Even though INVDRS are insanely supportive of each other and various local bands in SLC, that hasn’t killed their dream of being the gnarliest, loudest and grittiest band around. One of the ways INVDRS sticks out is the stage presence—and by that, I mean a stage full of amps and cabinets. “We use a lot of amps,” says Moss. “I have three Model-T heads that I turn everything to 10 [on] except for the treble, because that would just kill people.”

For the band members, they realize that their music is incredibly loud, sometimes to the point of sickness. “It hurts,” says White. “It’s not fun, and it’s not nice. It’s ugly and shitty, and it hurts your ears and fucks with your head. But if you stick around, you stick around because you dig it.” Adding to this effect are more over-the-top lyrics and song titles, such as “Kill Yourself.” Their new album, which was recorded and re-recorded three times to perfection, is filled with the energy of these four talented musicians. Something INVDRS hope for are more festival opportunities. By the end of this year alone, INVDRS will have played at four festivals: Crucialfest 6 here in Utah (June), Disinfect in Reno (July), Psycho Las Vegas (August), and their upcoming festival will be at the Midnite Communion IV in Long Beach, California, this November.

On this podcast, you’ll hear a new song that has never been released, titled “Into Your Grave.” Check out more music and upcoming shows from INVDRS on their Facebook page.