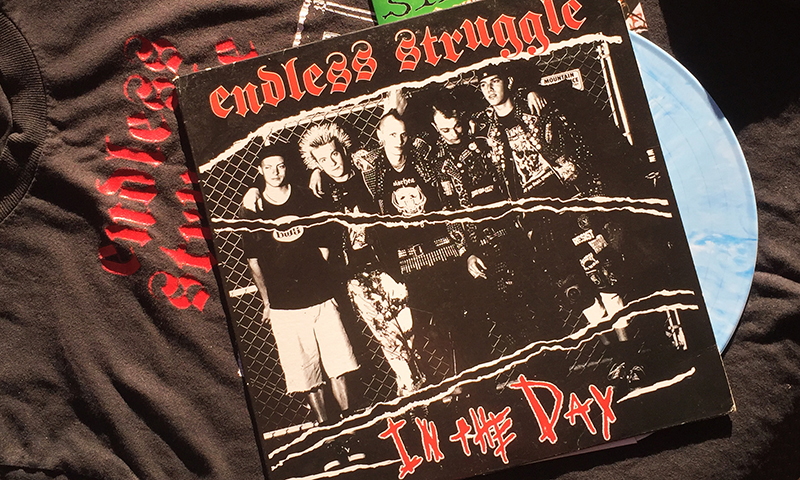 Local street-punk band Endless Struggle will reunite this March to play SLUT Fest for a one-time reunion show (for now). In this episode, Bobby Struggle and Jesse Struggle discuss Endless Struggle’s formative years—along with some crazy stories from tour.

In the band’s early days, it was difficult to find venues who hosted punk bands, but with a bit of luck and a lot of perseverence, Endless Struggle landed as the openers for The Casualties. After that, Jake Casualty of Charged Records reached out to the band members. “Jake … asked if Endless Struggle was interested in recording a 7” album,” says Bobby. They released their 7”, Leathers, Studs, and Punks in 1999, followed by their full-length albums, In The Day (2000) and Till The End (2003).

Touring, of course, ensued after. “We went on a full U.S. tour,” says Jesse. “It was with Antidote, The Virus, The Casualties, of course, and we just went all over the country playing with these guys.” Endless Struggle especially became close with The Virus. “We toured with The Virus so much,” says Jesse, “that we ended up playing each other’s songs, just fucking with each other.”

Endless Struggle’s touring stories include a destroyed five-star hotel, getting free food for being far too hungover, and revealing the truth about he SLDP tattoos that one might see on punks in SLC. “The SLDP tattoo thing is kind of part of the original Endless Struggle logo,” says Bobby. The original logo eventually became mistaken for a gang symbol. “Cops ended up showing up so often, and they saw this SLDP written all over everything, so we actually ended up getting labeled as a street gang for a while,” says Jesse. “Kids started tagging SLDP all over everything and we were technically on the gang list for Salt Lake.” Jesse also discusses the decision he made while touring that ultimately led him to dealing with anxiety for the rest of his life. “I hate talking about this, you know,” he says, “but I think that it’s important for kids to understand that this shit will fuck you up so bad.” Because of the escalated anxiety, Jesse was unable to tour. “Being punk rock doesn’t mean just doing whatever the fuck,” he says. “It ends up coming back. It ends up hitting you pretty fucking hard.”

The song you’ll hear on this podcast is “No Luck” from the In The Day album. Don’t miss their reunion tour on March 12 at Area 51 for SLUT Fest. Follow Endless Struggle and, maybe, more of their crazy antics on Facebook with the handle @endlesstruggleslc.