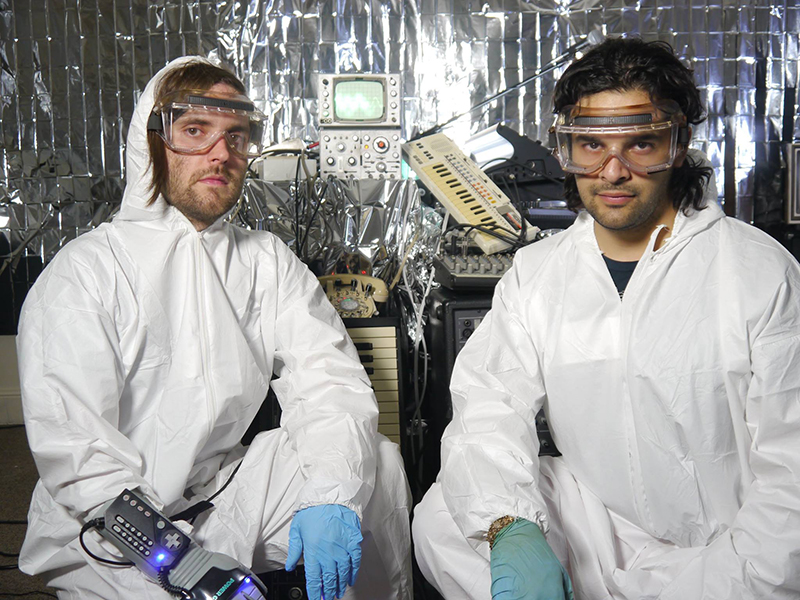 “We actually met at a party and instantly started geeking out,” says Faulkner. “We’re just two nerds who like math almost as much as well as we like making music with vintage gear.” Although Conquer Monster’s music alone is all you need to invoke thoughts, emotions and stories, they bring something unique to our local music scene by always incorporating visual elements to their music, whether it’s graphic art, film clips or even their own comic book. “We really wanted to explore putting out something that wasn’t just a musical component,” says Romero. Conquer Monster teamed up with Black Omen Comics to create Purge World, a comic book that corresponds with their album, Metatransit.

Taking place in the futuristic year of 4542, Purge World instantly captivates with a plot that follows an organization of assassins in a Cold War–like era. In this universe, aptly named Metatransit, humans use technology that takes all the data that makes up a person—emotions, memories, physical data, etc.—and transfers this data into music notes. The notes are then played by a band and translated to radio waves then to the speed of light, allowing humans to essentially time-travel to new planets through music. If this wasn’t cool enough of a visual element, Conquer Monster decided to add another visual element to the music and comic book combination: a ballet company.

Faulkner and Romero met Sarah Longoria, the Director of the Municipal Dance Company, at the STEM Building at the Craft Lake City DIY Festival, and immediately wanted to collaborate. “I mentioned to Sarah how cool I thought it was that they were combing music and dance into a single performance,” says Romero. “I stressed to her how much we would love to work with them in the future, and fortunately, she contacted us this December. Having a ballet company dance to your comic book and live music is an amazing opportunity.” Considering that Metatransit is filled with magical, futuristic moments and varied soundscapes, Municipal Dance Co. has a lot of variation of moods and tones to play with.

On this podcast, you’ll hear the track “Dystopian Underworld,” the first track of the album that sets the entire scene. Join Conquer Monster and Municipal Dance Company on April 7 and 8 at Urban Lounge, where Conquer Monster will score the Municipal Ballet Company’s performance with the entirety of Metatransit.