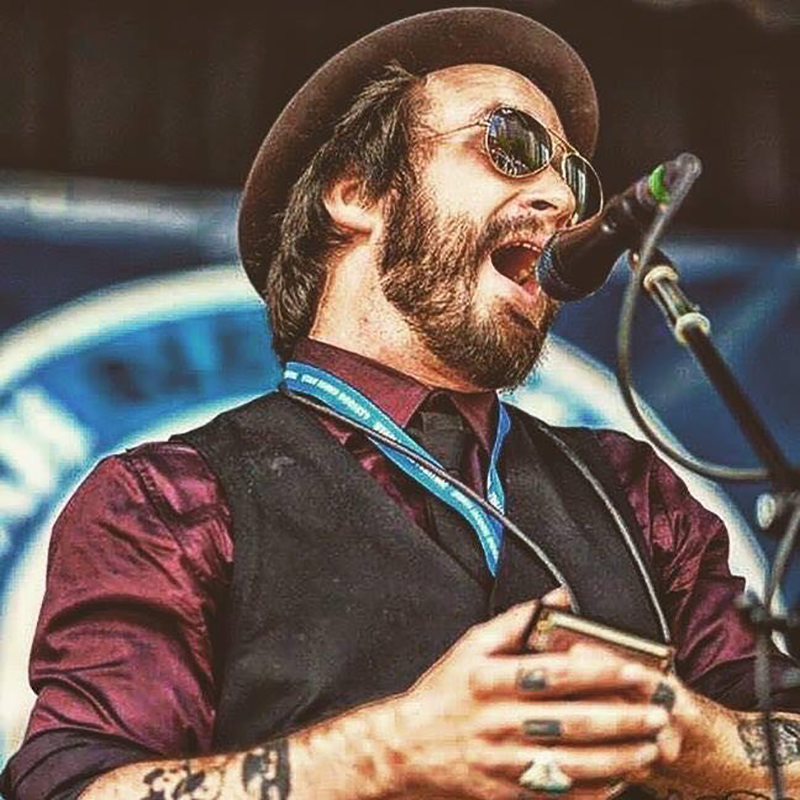 Tony Holiday, the frontman and namesake of Tony Holiday and the Velvetones, comes to Soundwaves to talk about his history with blues music and his commitment to keeping the genre alive. Along with Gordon Greenwood (bass), Joel Meza (drums), Michael Bigelow (baritone saxophone) and Landon Stone (guitar), the Velvetones play a style of blues that, while deeply connected to classic blues music, keeps the style fresh with extremely tight playing and a polished, clean sound.

In his younger years, Holiday’s love of the blues found him at odds with his surroundings. His friends’ love of hip-hop made him feel like he needed to keep his passion a secret, and the bluegrass and country musicians he grew up playing with found his frequent use of bent notes out-of-place. Regardless, Holiday stuck to his instincts and carried on with his blues training, eventually picking up the harmonica as his instrument of choice (Holiday now has an endorsement deal with Seydel, one of the oldest and most prominent harmonica manufacturers in the world). Though he notes that the process of learning the harmonica was difficult, the recordings played throughout this episode of Soundwaves showcase his exceeding proficiency at the instrument.

Holiday is not shy to talk about the frequent hurdles and missteps along his path. From his long-winded and stressful road toward opening for Willie Nelson to passport snafus complicating what would’ve been his first European tour, Holiday’s progress has been more of a stuttered climb rather than a meteoric rise. Holiday doesn’t look back with regret at these experiences: “Art is personal. What makes great artists great is that they’re able to put their whole heart out there, expecting it to get stomped on.”

In this light, Holiday’s heart has done a lot for him. Playing with Willie Nelson ended up being one of his most treasured performances, he frequently tours around the country, his group reached the semi-finals at the renowned International Blues Challenge in Memphis and is in the process of curating a roots-driven archival blues project called The Front Porch Sessions.

The Front Porch Sessions aim to record blues greats from all across the genre’s history right on their front porches—a crucial social and historical setting for blues music. The first volume is forthcoming, and Holiday has recorded musicians like Kid Andersen and Muddy Waters’s two sons (acclaimed musicians Mud and Big Bill Morganfield) playing on their father’s porch.

Tony Holiday and the Velvetones open up for Indigenous at the State Room on April 28, and head to their Facebook to check out their music and other upcoming events: facebook.com/tonyholidaymusic.