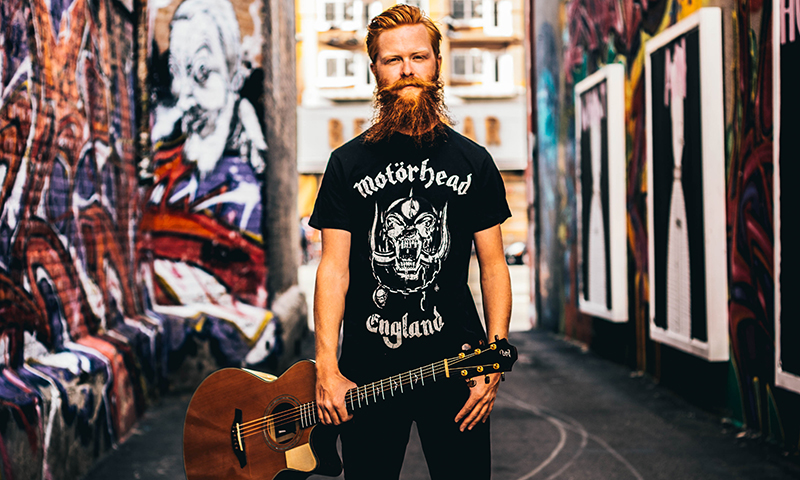 Nick Johnson details his journey as a guitarist, from metalhead to finger-style expert, and how he grew in this acoustic genre. At an early age Johnson, committed to the electric guitar, wouldn’t even touch an acoustic guitar. It wasn’t until he turned 16 that he began thinking of acoustic guitars differently and started to take interest in finger-style after he saw what he describes as a shocking Candyrats video of Andy Mckee.

A few years later, Johnson began learning finger-style, but after opening for a Joe Robinson show, he realized just how little he knew. Johnson asked Robinson how he, at the same age as himself at the time, got so good at what he does. In response, Robinson told him the story of Tommy Emmanuel, a finger-style musician who used to wake up at six a.m while on tour just to play guitar. Johnson took this as an opportunity to put into action this same level of commitment.

Around the same time, Johnson found out that he was going to be a father, and decided to pour all of himself into something that would one day be good enough that he could provide for his daughter through it. Waking up an hour or two before work and playing after, 6 p.m. to midnight, Johnson committed to writing and practicing.

As he grew his craft, Johnson sent nearly every recorded song to Candyrat Records but with no responses. Johnson talks about the shift that happened with his sound—rather than playing highly technical songs that he wasn’t even sure he liked, he focused on the thing that connected him so strongly to pop and punk and that was groove. After writing and recording his song, “Yeah, But Where’s the Melody?” he reached out to Candyrat records, this time with success— everything changed overnight.

You can listen to more of Nick Johnson at nickredshred.bandcamp.com and stay up to date on Facebook.