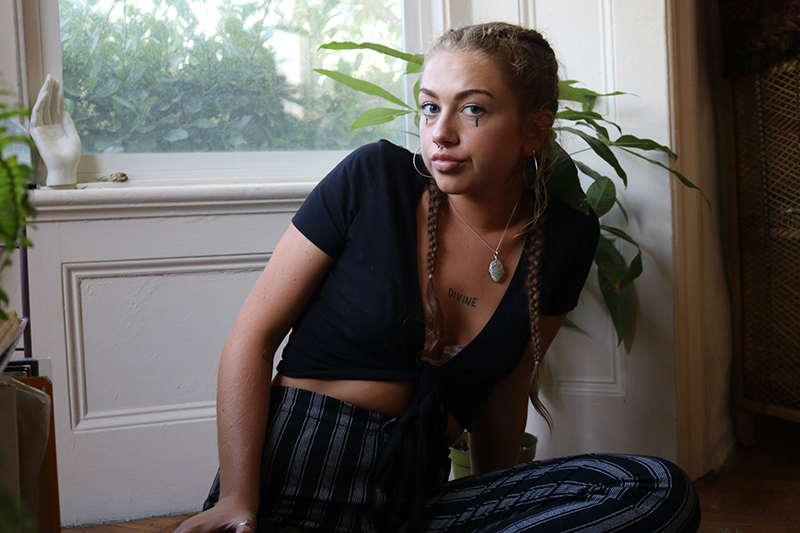 Larkin talks to us about growing up in a musical family, finding her artistic voice in a shower and turning the world she sees into art.

Larkin Swain, originally from Orem, is a rapper based in Salt Lake City. She posted her music on Soundcloud for the first time fairly recently—this past winter, actually. After getting out of a long-term relationship and feeling as if she was in a stagnate, limbo state, Swain decided to finally take her dreams of creating music and turn them into a reality. She recorded her first song, “The Birth of Venus,” in a shower in her childhood home on her father’s laptop. Excited about her creation, she immediately showed her family the song and was met with full support.

Swain grew up in a family of musicians with six siblings, many of whom are pursuing lives in music or are heavily interested in music. She also says that she grew up in a religious household, and describes music as a religion unto itself—a “transcendent” experience for her. Up until recently, she had only ever been a music appreciator, allowing her siblings to be the ones who created while she observed and listened. But after years of quiet observation, Swain found that she saw everything as art, and decided to transpose that art into her lyrics.

Her foray into rap was somewhat initiated by trips up into the mountains with her friends, where they would listen to beats and record themselves freestyling over them. She has been influenced by the likes of Lauryn Hill, Kilo Kish and, especially, Noname. Swain was inspired by Noname’s willingness to break free of genre constraints and desires to break free of labels and expectations in her own music as well, allowing her work to be an openly expressive platform for anything she is feeling. More recently, she has been listening to and been inspired by LeXuS., Biig Piig and orion sun.

Swain says that her experiences in toxic and abusive relationships have heavily informed her work, wanting to shed a light on these experiences that are unfortunately all too common. Traveling has also inspired her work, breaking down preconceived notions of humanity and openly perceiving and accepting people from around the world. She has taken this inspiration and transferred it back into her work, allowing it to inform her ability to observe and write about everything she sees.

She is currently working on a collaborative EP of local artists, setting up more shows, and adding short-film direction to her repertoire of self-expression. You can listen to Larkin’s music at soundcloud.com/larkin-swain and follow her on instagram @yungpeachfuz.

Also, make sure to catch Larkin open for Alyxandri Jupiter and Freemind Movement at Urban Lounge for SLUG Localized!