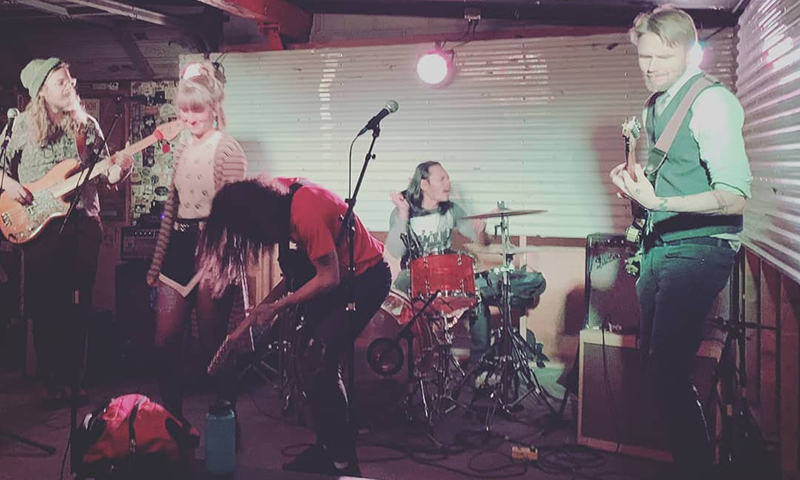 A visit to and old friend, a New Year’s Eve warehouse party, and a chance snowstorm conspired to bring Dave Crespo (Guitar, Vocals), and by extension SPO, from Boston to SLC.
When he first moved to Salt Lake Crespo brought nothing. Recently separated and seeking a new start, he found a unique music scene that he felt would support his band’s growth better than any other cities he’d played. “I feel like I can do something here in Salt Lake … it’s not Austin, it’s not L.A. it’s a place that has opportunity and it’s growing.”
He spent his first months in Salt Lake writing songs with friend and fellow band-member, Ashley Perry (Vocals), and soon they had booked their first show at The Urban Lounge. All they needed now was a band to play it. With the help of producer and drummer Bruce Kirby, Crespo got together a band consisting of himself, Perry, and Kirby’s friend Zach Novak (Bass). In July he returned to Boston to finalize his divorce and while there he played a show with current drummer Rutchaplee who officially joined SPO soon after.
Ever since that first show SPO has been gaining momentum and Crespo feels the opportunity in Salt Lake is what the band needed after hitting a wall in Boston. “It’s weird cause back home you could be a good band and no one cares, and that’s kind of something I saw when I was here, I could just bring my band and people would actually care.” Now he is focusing on writing music that is true to his emotions and who he is as a musician and as a person and finding a balance between his work as a booking agent promoting other bands and moving forward with his own music.
Come see SPO Friday, April 26 at the SugarSpace Arts Warehouse and keep up with all their latest music on bandcamp or at sporules.com