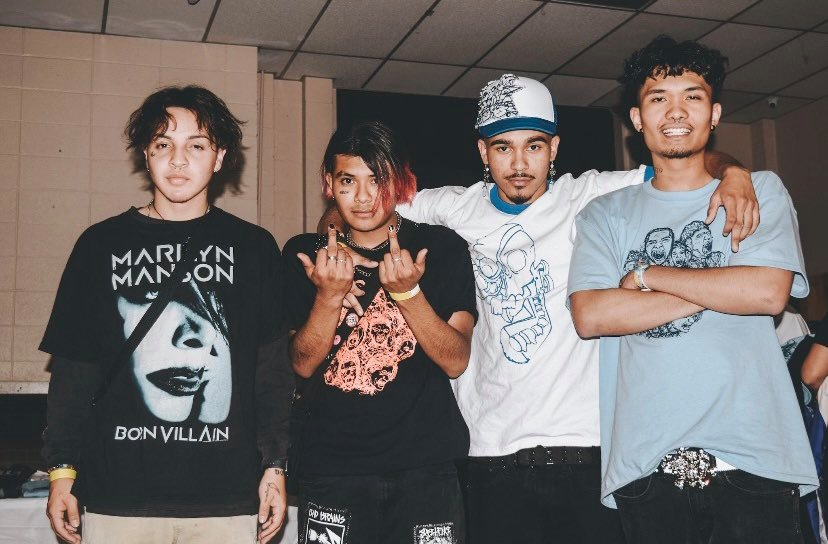 “If you’re not well off and you don’t have that advantage, it’s hard,” says K8OH, a member of the Utah-born collective Dogma Society. Growing up, K8OH’s family frequently moved to different neighborhoods in the Salt Lake area, giving him a wealth of experiences from across the valley. LORD SINEK, another member, shared a similar adolescence, saying, “I moved [from Dallas] to Utah when I was about two years old. We lived in a very bad neighborhood [there] and my parents wanted to start fresh and move to a quieter city,” he says. “But we moved right back into the underbelly of it—like Glendale … I was exposed to a lot growing up there.”

Taking these experiences from their youth as a source of inspiration, the group—which also includes DIRTY CHINO, ITSNUBES and Dogma Society’s Creative Director, MMMERNIE, —crafts genre-blending pop steeped with intimacy. “None of the music we do is meant to be sugar coated [or] put lightly to please the listener. It’s to show our true feelings,” says K8OH. “We don’t want to be holding back in any sense. We always want to make sure we’re putting the full picture in our music.” LORD SINEK adds, “We want to show what goes on in our neighborhoods or everywhere that’s not filled with ‘white people’ or Mormons … and we want to showcase that in a positive light.”

The group came together early last year when LORD SINEK brought K8OH to his studio to record. “I see it as a real divine thing … it was a blessing,” says K8OH, who at the time was struggling with addiction and the passing of his father. LORD SINEK says, “We’re very big on energy.” When the group was fully assembled, they could all feel it. “We all saw in each other [that] we’re all talented.” And they weren’t the only ones.

After getting the attention of The Masked Gorilla, host of the Soundcloud podcast Link and Build, with their debut track, “HEADRUSH,” Dogma Society was brought on the show for an interview and given the opportunity for mentoring. “Things just started going crazy for us,” says LORD SINEK. Motivated by this opportunity (and needing to make rent), the group set forth making their first album, Dogma World, Vol. 1. Upon its release, the group put on a show to celebrate, providing them a space to soak in their achievements. “We had to sacrifice and do everything we could to make sure we provided the city with what it needs and that’s love, positivity and unity,” says K8OH “That show was just a true reflection of that.”