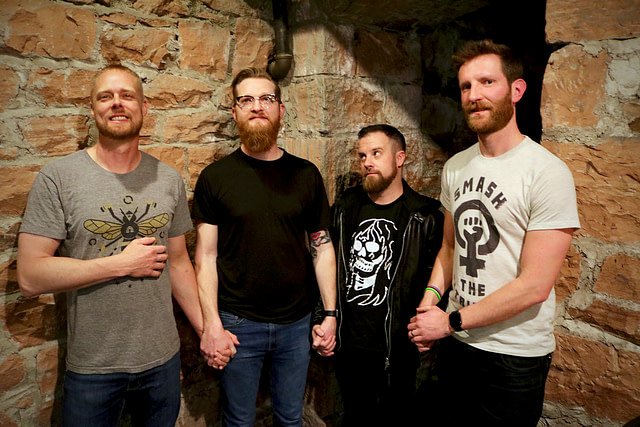 “It’s a good democracy,” says Andrew Drechsel of the creative process behind SLC-based metal group Swarmer. Drechsel plays drums in the band and is joined by Chris Clement (guitar, vocals), Jason Weidauer (bass) and Peter Makowski (guitar, vocals). “I would say that our music is very metal-rooted. It’s got a lot of doom and sludge aspects to it,” says Drechsel. “ We try to broaden that a bit; it’s not just straight up metal.”

It’s Swarmer’s spirit of sharing and willingness to combine ideas that leads to the group’s distinct sound. “We’re a good combo because we love metal but we have members who have come from a background [with] more structured songwriting,” says Clement. “[Our music is] this nice combo of something you can follow, something that’s really heavy and [something that] messes with your head.”

The band is planning to release their upcoming album, Brutalist, within the next few months. Featuring some of their most personal music yet, the new record to sure to be an emotional experience for the group. “My lyrics focus more on my Mormon upbringing because I was part of that whole thing until into my 30s,” says Clement. “Trying to move on from it can be difficult—there’s a lot to process and there’s a lot of new ways of thinking that you have to adapt to. I try to not to be a bitter, angry ex-Mormon, but sometimes it just comes out of me.”

Catch Swarmer play their new album at this year’s Crucial Fest 10, Aug. 26–29 at Metro Music Hall. Tickets are free and are available at crucialfest.com.