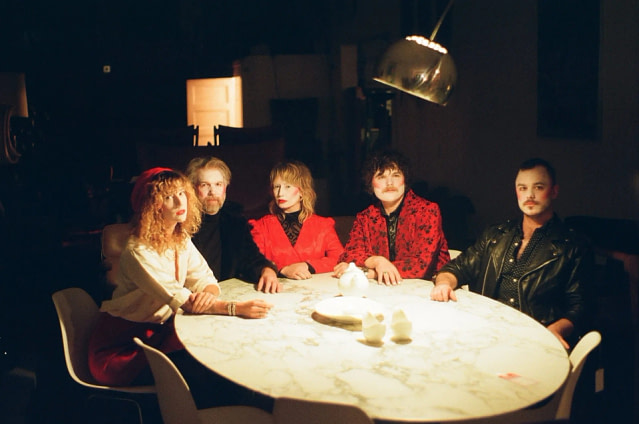 The band’s admiration for rock-and-roll, shoegaze, and glam-rock morphed into their own sound. Keyboardist Natalie Hamilton was a classically trained musician, so her transition into the band has been exciting for her as she learns the “art of rock-and-roll.” She says, “I come from somewhere completely different and this has been such a fun surprise. I’ve really fallen in love with our music and this group.”

The band’s new album, Sunshine, has been available on streaming platforms since last fall. They became friends with Salt Lake City–based band Dad Bod, who introduced them to Uphere Records. In January of 2022, they released a cassette of the album and just recently, vinyl. Since the album was a pandemic project, it was recorded at home, giving it a bedroom pop kind of feel. “We recorded [the song] ‘Where The Light Wants To Go’ around July or August of 2020. The rest of the songs sort of followed over the course of about a year, most of them just recorded in our living room to a tape machine,” says Joe.

Going forward, the band is working on a sequel to Sunshine. Since much has changed since the band’s beginnings and they’ve started to perform live, they are making some adjustments in the process. Shelby says, “When we made Sunshine, we didn’t have the band, and since we’ve been playing the songs live, a lot of them have taken on totally new personalities. The songs sound pretty different live than [on] the album.”

Joe says, “[We’re all excited] about what’s happening in Salt Lake City right now. This is a very special moment where so many bands are coming out and having this creative stride.” Next, they’re planning on touring the Northwest, hitting Boise, Portland and Seattle, but first, you can catch them perform at the first SLUG Picnic event of the summer on Saturday, June 25! Follow their Instagram @theplasticcherries and listen to Sunshine on all streaming platforms.