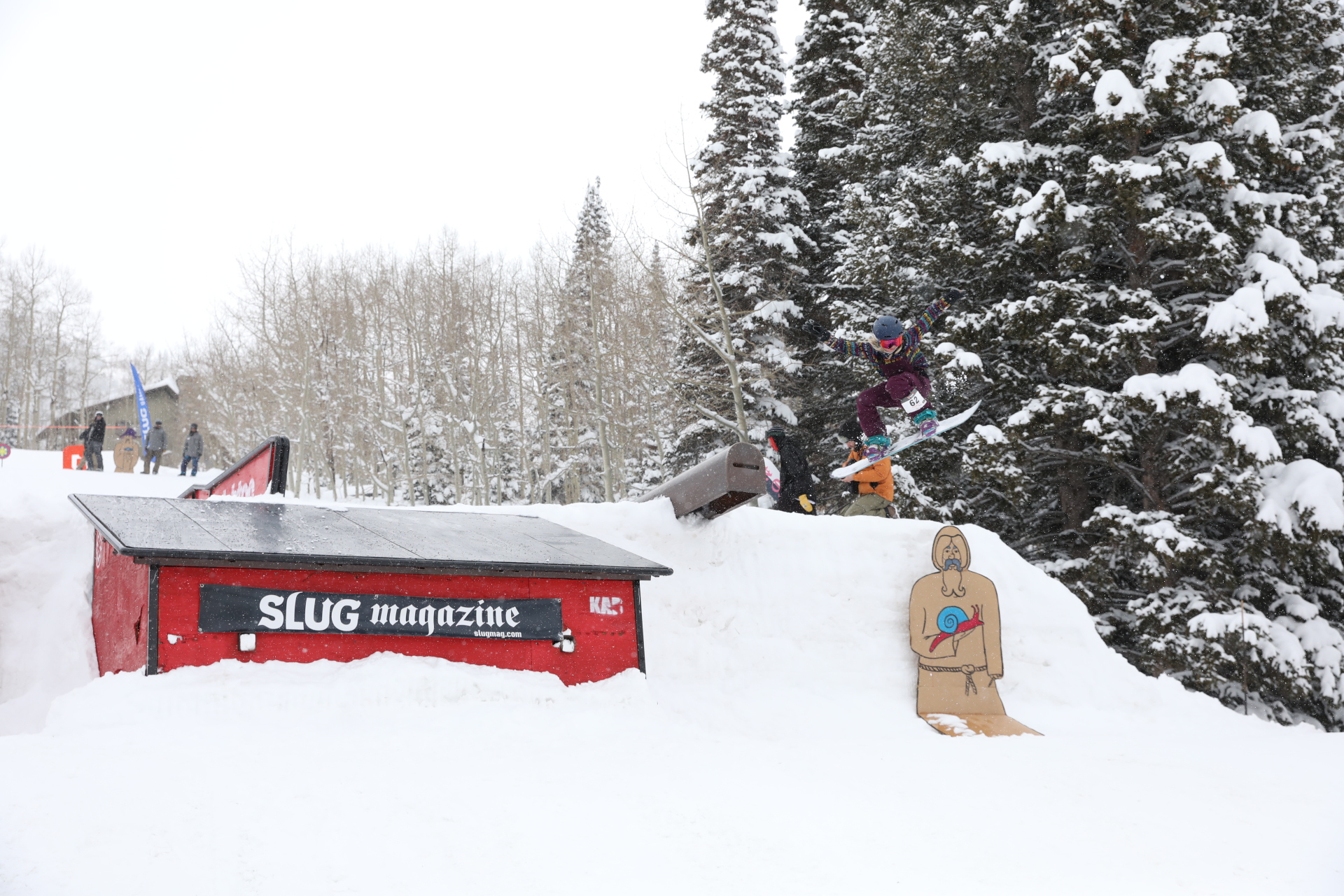 Meat missiles were firing on all cylinders Saturday, March 9, at the 19th Annual SLUG Games: Winter Wizardry rail jam at Brighton Resort. There’s no better way to ring in the start of spring ski season than with a competition made possible by all our sponsors: Arbor Snowboards, Izm, Pit Viper Sunglasses, Saga Outerwear, Graywhale Entertainment, Chaos Headwear and Brighton Resort.

Fonnzy was keeping the stoke high as the contestants warmed up on this years course and kept the crowd moving and warm all day. Featuring a flat down box, an S-rail, a waterfall rail to a shed jib, a cannon tube and a bunch of cardboard wizards, the setup made by Brighton’s park crew allowed contestants plenty of variety to show off their best tricks. The day followed traditional rail-jam format of 20-minute heats for the 17-&-Under crowd, then Open Ski and Open Snow, followed by finals for those who qualify in the same order of categories.

The MC and head wizard of the day, Rad Brad, kept the event moving and vibes high all day long while giving the riders the shout-outs they deserved and explaining to the crowd what they’re seeing.

The 17-&-Under category kicked off the jam, and these kids didn’t hold back. There were one-foot board slides down the flat-down box, there was a huge daffy and Luke Mullan threw a 2 off the waterfall rail to gap the whole shed jib that had the crowd going crazy. Garrett Calaway won the award for “Best Crash” of the day, giving the crowd the daily dose of carnage they desired. Watching the next generation of skiers and riders throwing down this hard was inspirational and an ego check at the same time. Between the heats, you could find a lot of the 17-&-Under crowd shot-gunning Red Bull and eating whole bananas over with our friends at Pit Viper, further proving the sendy nature of these kids.

The Open Ski crowd that followed, though it was small, didn’t lack talent.  Isabel Parada was representing the girls out there and holding her own, ripping the flat-down box. Tucker Fitzsimons was hot, lapping the park and sending all day.

Finally, the Open Snow category ended the day. The field of contestants were huge, and they all seemed to be feeding off of each other’s stoke. The Best Trick of the day went to Jeff Hopkins for a back slide on the “S” rail, but he certainly wasn’t the only one getting after it out there. The boys were jibbing their hearts out and getting creative on the “S” rail.  Flips are always a crowd pleaser and were thrown off the cannon tube. Paxton Alexander was spinning to win out there, and the crowd was loving it. The girls showed up in a big way too. Small but mighty Gwynnie Park was giving the course her all and charging every feature she hit.

A huge shoutout to everyone that competed. The top spots of the day went to:

Thanks again to the Brighton park crew, Line Skies, Hovland Snowskates and all of our sponsors. We can’t wait to do it all again next year! Bring on the spring slush.

***More photos will be added soon!