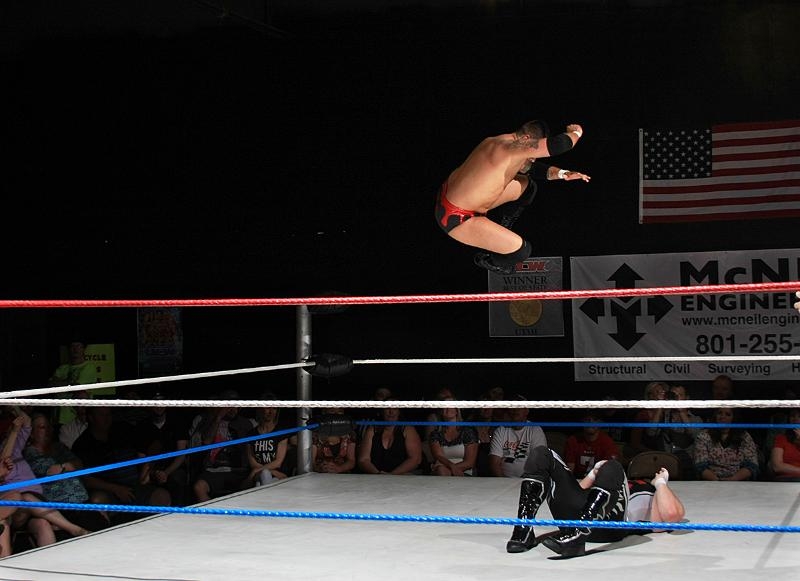 UCW-Zero has an Instagram account which you should be following. Why do I even bring it up? Because last taping, all I had to do was re-post their flyer (took me all of about 30 seconds) on Instagram and I won a FREE autographed poster from all the UCW wrestlers! Not to mention, the content’s not too bad either, featuring new photos every day to keep you constantly engaged with the best wrestling promotion in the state! @ucwzero now!

Anyway, enough of my asides. This one began in fine-fashion: commissioner M.K. sported a shiner, a lovely shade of plum, and a hot crowd anxiously awaited a card that was full-to-bursting. Let’s get it underway.

Zack James v. Durango Kid
No. 1 Contender Match for Ultra-X Title
Though losing the heavyweight title has certainly sucked a lot of wind out of Zack James’s sails, I’m impressed by his continued drive to dust himself off, and immediately thrust himself back into action, this time into a number one contenders match for a shot at the Ultra-X title.

Durango Kid had a few zingers, utilizing his air-based move-set to outpace James, and I award extra fan points for the added dollop of drama achieved by holding James in an Undertaker-esque rope-walking/armbar spot, but regardless of how many times he trounced James over the top rope, the former heavyweight title-holder seemingly couldn’t be squelched. To keep the aerial offense of his attacker in check, James employed a more “ground-based” style for this match, save for a moonsault that Durango Kid narrowly avoided (good thing too, because it probably would’ve been a pin) and a high-speed topé that drove Durango back into the front row of chairs. Brawling seemed James’ best recourse overall anyway, and his 3 “S” approach (stomps, sidekicks and submission holds) eventually brought him the win by submission, and a shot at the Ultra-X title. 5 gold stars to James for keeping his head up, and not letting any unfortunate events keep him down.

Shadow Fox v. Jayson Bravo
It was definitely a thrill to see Shadow Fox back here in Salt Lake City, as the last time he was here was back in December. Still, he’s been tearing it up in a few other promotions around, notably AAA in Mexico City, and despite Jayson Bravo’s (and gal-pal Sierra Rose, who accompanied him) attempts otherwise, he still put on a hell of a show. Rose did what she does best, sneakily choking Shadow Fox in the ropes to give her man the advantage, but Fox responded with a swift clothesline to Bravo, landing him outside of the ring, and then an even swifter topé onto the both of them. Bravo kept to his pedigree of brutish bullying though, choking, suplexing, (note to his timely and topical “What does the Fox say?” joke) Bravo combo-ing and then finally setting up a devilish looking hangman off the top rope for a pinfall and a win by Bravo. Better luck next time for Shadow Fox… let’s hope this doesn’t all go to Bravo’s head.

Chase Earl v. Stevie Slick
Oh man, another one of these? Where does Slick get off, beating up on younger wrestlers? Yeesh. Chase Earl entered like a tried and true babyface, removing his glittering chain necklace and draping it around the neck of a fan (think pre-screwjob Bret Hart and those sunglasses). Slick entered with his own appointed security (all explained in a pre-taped vignette: now that Slick has lost his “muscle” in Martin Casaus and Derrick Jannetty, he’s appointed a new security guard, Vig, to do the honors) and seemed to get a sadistic kick seeing the audience recoil in horror as he disrobed into his ring gear.

It shouldn’t come as any surprise that Slick utilized every opportunity to cheat, and the crowd took out their frustrations on the admins with a hearty “you suck ref!” chant. Choking Earl, and holding him in a few long and painful submission moves got the better of the poor rookie and the feeble ref really couldn’t do anything about it. Eventually, an angry Durango Kid (having just submitted to Zack James, probably feeling a bit empathetic) appeared from the locker room, running out to the ring to help Earl. At this point, Slick’s silent security guard Vig sprung into action, laying a walloping on his assailant and choke-slamming him down.

Just as the heat had built to a fever-pitch, Guerrero Azteca (in street clothes) ran to the ring from the audience and grabbed the mic to tell Slick exactly how he felt about his actions. Vig and Slick promptly slithered back to the dressing room, safe in the knowledge that they’d rained on everyone’s parade, while Earl and Durango Kid slowly regained consciousness. We haven’t seen Guerrero in a while, and if for nothing else, his intrusion is proof positive that ANYTHING can happen at a wrestling show! Looking forward to seeing him back in the ring!

Austin tried to make his fresh-from-the-oven mean streak visible from outer space by choking Junior X in the ropes, but Acosta earned some heel spotlight by pulling X’s hair and tossing him with a sunset flip. Los Mochi Paco made the ultimate save here, doing most of his battle with Acosta (fighting through Acosta’s chin lock and a leg drop right on the apron), fully turning the table with a double cross-body on both Acosta and Austin and a well-deserved pin. The 801 District will maintain the UCW-Zero Tag Team belts!

Champion v. Champion Match
Lacey Ryan (Ultra X Champion) v. Sierra Rose (UCW Women’s Champion)
Having won the Ultra-X championship “fair and square,” Lacey Ryan took to the mic to call Jayson Bravo a “man whore” and to have him castigated to the locker room, so as to prevent any further disruptions from the side of the ring. A “heel heel” bout for sure, but it seemed that the crowd still swung Lacey’s way, proving that even as a lying, cheating heel, she can still command more crowd attention for her wrestling prowess.

This was indeed a hotly awaited match, one that’d see one competitor stripped of their title, and the other adorned with two. I think everyone expected more high-flying maneuvers from Lacey here, but Rose seemed determined to keep it to brawling in the ring, a brash clothesline and a long and painful looking submission hold by Rose caused Lacey to dig deep into her well of warrior spirit, playing her attacker at her own game. As if on cue, Stevie Slick, the man who’d recently aligned himself with Lacey, appeared with Vig in tow.

I shall credit neither ineptitude nor wrongdoing on behalf of the ref, but Slick made easy work of distracting him while Vig choke-slammed Rose, taking out Ryan’s competition for a quick cradle and pin. Hmmm. Lacey walked away with two belts, while an angry Jayson Bravo hits the ring to try and console Rose who wasn’t having any of it. Still teasing a breakup? We’ll see. I just hope Ryan gets her act together soon. She’s too good a wrestler to have to cheat for a title…

Dom Vitalli v. Jason Jaxon
One half of the Keepers of the Faith Tag Team, Dom Vitalli (or whoever came up with his name) must be a fan of the band Terror. He’s got a good heel shtick and what looks to be a “HC dude” gimmick (which I will always back), and definitely revels in getting booed. Jaxon’s seen plenty of action here in the past few months, and so we’re all interested to see how he works up the card.

Jaxon held out in the initial stages, showcasing his knack for explosive in-ring work and a high-spot or two, with a dazzling kick. Unfortunately, the stars weren’t exactly lined up for Jaxon, and Vitalli made easy work of choking him in the ropes before laying him out with a big boot and a nasty submission. Jaxon almost eked by, narrowly avoiding Vitalli’s moonsault, but a vicious elbow drop is what did him in putting him in for the loss. Let’s hope this is a build to stoke some fire for a comeback on Jaxon’s part soon, because the dude deserves it.

6 Man Tag Match
Dallas Murdock + Manny Fresh + Dark Angel v. Reign of Insane (Bronson + Kade) + Rocky Ocean
6 man tag matches are often difficult to follow, and this wasn’t any exception, but it was certainly fun to watch. Evidently, Rocky Ocean was none too pleased being stuck in a tag team match with the cackling company of Kade and Bronson, and they knew it, gleefully tagging him into less-than-opportune circumstances whenever they could.

As is becoming a staple of every show, Manny Fresh crushed a clean looking suplex on Kade to begin the action, and Kade shot off a neat drop kick in retaliation. Though the heel team seemingly couldn’t cooperate, both Bronson and Kade still managed to double-team Fresh, eventually incapacitating both Fresh and Bronson inside the ring where Dallas Murdock made a tremendous save via an atomic drop/big boot on Kade for the win. Major kudos to Fresh’s comeback, for keeping Reign of Insane at bay, and to his team for backing him up.

Main Event
“The King of No Rules” Gabriel Gallo v. Martin Casaus
Now that Martin Casaus has shaken himself free from Stevie Slick’s shackles (try saying that 5 times fast), it seems everyone’s coming out of the woodwork for a piece of his Heavyweight Title. Gabriel Gallo has more than a few sadistic tendencies. He spent the majority of his introduction trying to intimidate commissioner M.K., and berating the audience.

I won’t give away too many details here (that’s why there’s a Youtube channel folks!) but I will call attention to Gallo baseball sliding into Martin Casaus’ head, while the latter was laid out in a “tree of woe” on the turnbuckle, a nasty looking Gallo-initiated piledriver and Casaus’ beautiful looking German suplex. For the finish? Wait n’ see bub.

Signs with South Park characters on them to those who trekked out, and a 30-hour loop of Michael Cole explaining how to use the WWE app to those who didn’t. Roll out for the next taping on June 14 at the UCW arena (47 S. Orange St). “Like” Ultra Championship Wrestling on Facebook, follow them on Twitter (@ucwzero) and Instagram (@ucwzero) and subscribe to the YouTube channel. Remember: nothing REALLY happens until the bad guy shows up. Stay heel!