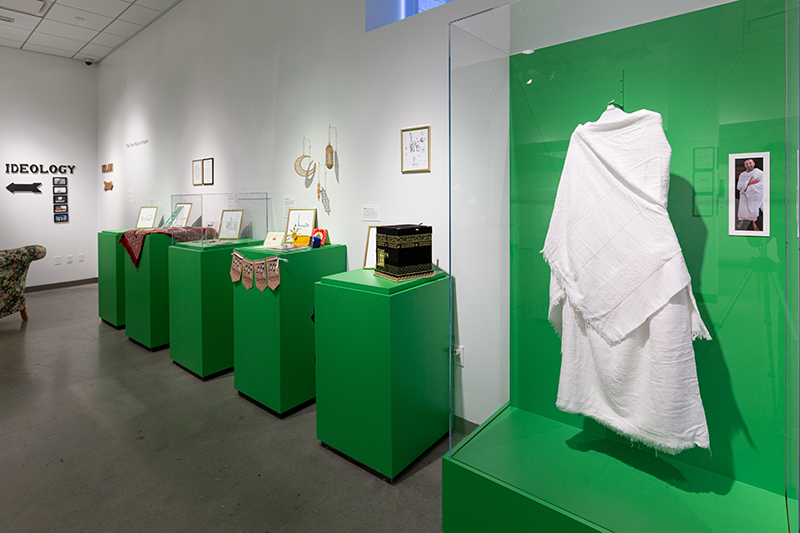 A Cover by its Book: Ummah and Understanding Islam

A friend of mine from the UK once told me of his memory of 9/11. When it happened, his father remarked that the United States was about to become a lot more racist. When he asked him why, his father told him that the government and the people would do what he’d seen other countries do: justify behavior through creation of the Other. They would dig in their heels around national identity and what it meant to look like and be a U.S. citizen. The country would slip into becoming not just anti-immigration but anti-immigrant, particularly toward Arab people and especially toward Muslims.

Eighteen years later, we can argue as to how that has played out, but as a baseline, we can agree that Muslims have suffered uniquely since 9/11. Ummah, an exhibition put on by the Emerald Project (a local nonprofit organization dedicated to promoting the understanding of Islam, run by two young Muslim women and University of Utah graduates Satin Tashizi and Nora Abu-Dan) in the UMFA’s Acme Lab, is a fight against the unique group bias that has grown around the Muslim community in the U.S. The show is an assertion that contact with the perceived other can create new social geographies.

“Ummah” is the Arabic word for community, but the word and real meaning transcends nation and geography and instead focuses on the ability of faith and value systems to connect people. Featured at this exhibit are works and voices from local Muslims that aim “to dispel stereotypes and misunderstandings of Islam due to xenophobia … Consider how your own values and important aspects of your identity and community are present in this space.” Common misconceptions and questions about Islam and Muslims litter the wall of the entryway. “What is Sharia Law?” “Why don’t they show their hair?” “Is Islam kind to Christianity?”

“‘Ummah’ is the Arabic word for community, but the word and real meaning transcends nation and geography.”

The answers to these questions are basic facts about Islam and Muslim life, and it’s telling that in 2019, it’s still helpful—and even necessary—to create an exhibit that amounts to a “My First Introduction to Islam.” The first real piece of the exhibit features two chairs on a rug sandwiching a small coffee table and facing a TV on which a visual poem plays. “I want you to stop and think about 9/11,” the poem implores. “The planes were not the only thing hijacked that day. That pain, that fear, that chaos, that drowning feeling of powerlessness. On that day, Muslims, Muslims like me, felt it twice. On that day they hijacked the airplanes, they hijacked Islam.”

The Emerald Project has provided headphones to listen to an audio interview with Grace Song, Executive Director of the Usuli Institute (an Islamic think tank for countering ignorance on the religion), in which she explains her young conversion and why she fell in love with Islam. For me, this was a highlight of the exhibition. Hearing Song talk about her experience of looking into Islam and eventually understanding it as a thing so different from what it appears to be resonated with my experiences of overcoming ignorance about the religion and the culture it carries. Song remarks that although it seemed strange at first, Islam was in line with her intuitive sense of what it means to be a good and just person in this world.

“Why have people placed the blame on Muslims when [9/11] has gone beyond and completely against every single thing they believe in?”

Other Ummah displays focus more on the core aspects of Muslim life and religious practice. For instance, the display on sawm (fasting) helps explain the concept of Ramadan and how Muslims do not eat or drink between dawn or dusk. Another explains Hajj, the obligatory pilgrimage to Mecca that a Muslim must make at least once in their life. Again, an audio narrative of one Muslim’s humbling account of their journey accompanies the display, and it reminded me of my young Mormon trek to Martin’s Cove. In this Muslim’s account, I found a shared sense of hard-earned humility. On the far wall of the exhibit are objects selected by local Muslims to express what Islam means to them, such as a mini Qur’an, small prayer rugs, necklaces and bracelets. That these are the personal objects of local Muslims is meaningful: Again, it speaks to the belief in generating a social geography that decentralizes Christianity through contact with other monotheistic religions and cultures.

There is much more to learn about Islam and Muslims in Ummah, but particularly fascinating is the end of the exhibit, where visitors are invited to share lingering questions or thoughts on Islam and Muslims after having seen the exhibit. These responses are telling. Some people remark that they are thankful for the opportunity to learn; some say they indeed see the parallels between Islam and Mormonism; some wonder aloud whether they believe in the same god as Muslims. One comment stuck out to me: “Why have people placed the blame on Muslims when [9/11] has gone beyond and completely against every single thing they believe in?”

The answer to this is simple and complex, and among the many conclusions is that one simply must educate oneself. Ummah offers itself as the first step. For more information on Ummah, which runs through Dec. 15, and on the Emerald Project, visit umfa.utah.edu/ummah.

Two for All – Power Couples: The Pendant Format in Art
DE | MARCATION