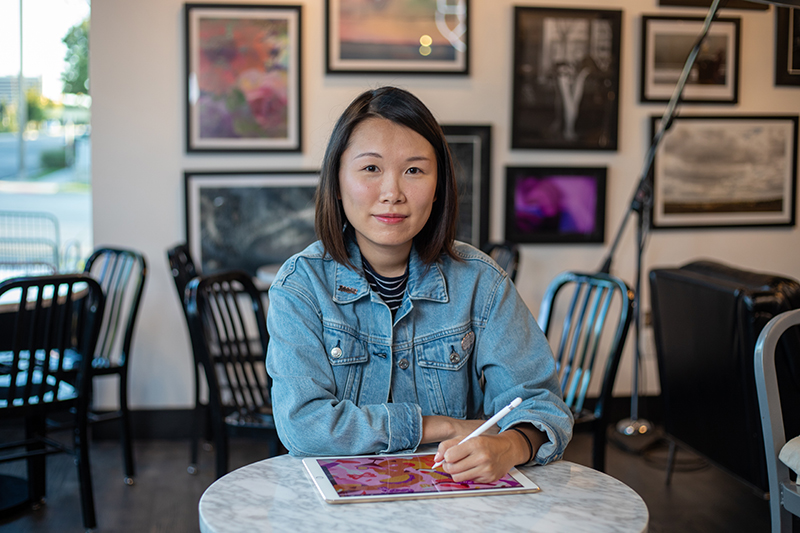 Ann Chen: Writing History in Her Own Script

Ann Chen’s demeanor bespeaks the tone of her hand-lettering. She is ebullient, positive and oftentimes quotes uplifting phrases that keep you enjoying the presence of both her as a human and her artwork. Chen says, “My work is heavily script-focused with round curves. I love extending line work from letters to create illustrations.” Chen is drawn to vibrant colors like orange, teal, pink and yellow. “I like to work with bright palettes that convey energy and joy. I also work with black as the background a lot to create a strong visual contrast,” she says. Since her more common artistic role is being a hand-lettering muralist, one could see how you would want an Annlettering commission to paint the walls of a space you in habit in order to invigorate the room.

Chen displays her penchant for hand-lettering, typography and graphic design on the cover of this month’s Local Design issue. With an explosion of color and activated shapes and figures, Chen displays the theme of the issue along with a quote by renowned designer David Carson: “Graphic design will save the world right after rock and roll does.” This SLUG cover was drawn entirely in an app called Procreate, something that Chen has been using quite a lot for her digital lettering. “It was kind of hard combining the two different concepts of rock n’ roll and design,” she says. She started thinking about what is symbolic about rock n’ roll and how people relate to it. She resolved to move forward with the “rock n’ roll” hand symbol gripping a pencil, tying the two themes together.

“[Moving to Utah] was super hard for me. I felt like it was easier sometimes to be drawing instead of trying to make friends.”

Chen’s creative journey began in her adolescence. She says, “Because I grew up in Taiwan, I was super into anime as a kid. I just knew I wanted to be an artist.” Turning to art and creativity became a way to triumph through Chen’s move to the U.S.  “When we moved to Utah, I had to learn English from scratch,” she says. “It was super hard for me. I felt like it was easier sometimes to be drawing instead of trying to make friends.” In high school, Chen was introduced to the world of graphic design. Through designing things like the school shirts and posters, Chen experienced a foreshadowing of her eventual career.

Chen’s passion for typography and hand-lettering began a few years back while Chen was still a student in college. “I think my first encounter with lettering was in my graphic design history class. We learned about Louise Fili, one of the first few female typographers,” she says.

Chen’s education in typography and hand-lettering grew congruently with the style’s increasing resurgence and popularity on Instagram. “I really dove into hand-lettering during my senior-thesis project,” Chen says. “I wanted to do mine on Taiwan, where I lived until I was 9 years old.” Not knowing how to do lettering, Chen chose to use this method for her project, which paid homage to Taiwan. The project was called Letter My Name, and Chen hand-lettered familiar names from home. She says, “At the end of it, you had to put on a BFA show. So I printed my work from the whole semester. We had an exhibit down in Orem.”  Witnessing her work framed on the walls was a huge, self-actualizing moment for Chen that helped kick off her eventual career.

“I feel like someone is watching over me and sharing my stuff.”

Having a solid portfolio by the time Chen graduated landed her a full-time job as a designer at Jane.com. “While I was there, my freelance didn’t start exploding, but things were starting to happen,” Chen says. It was during the spring only two years ago that Chen had her first freelance gig, which was a “Build community with us” design for SLUG Magazine tote bags.

Shortly after, while Chen was working for another business called Letterfolk, she was asked to do her first mural commission. “So I’m working at Letterfolk, and I buy tickets to Hall of Breakfast,” Chen says. “Literally five minutes after I bought those tickets, I go on Instagram, and I have a DM from someone who works at Hall of Breakfast. It read, ‘Are you interested in doing a mural for us?’ and I thought ‘This is so weird!’” Chen was surprised by the inquiry, as she had never created a mural and didn’t know where to start. She says, “I didn’t know how to paint murals, but I said yes to it and frantically googled how to paint murals. It feels hard because it was a larger scale, but it is very similar to painting on paper and is surprisingly easy.”

Since then, Chen has had commissions from Adobe, Prudential, Hitachi, Chatbooks, Big Cartel and many more. “I feel like someone is watching over me and sharing my stuff,” she says. “It’s like the magic of Instagram and the magic of constantly talking about what you want to do.” These robust couple of years have allowed for Chen to leave her full-time design job and become part of the self-starter club. Since it hasn’t been a full year of freelancing for Chen, she doesn’t yet know what the full picture is but looks forward to the challenges and opportunities to come. You can visit Chen’s work on Instagram @annlettering and at annlettering.com/home.

Jill Went Up the Hill to Draw Nature
Feeling Creative? Go Out For a Cocktail