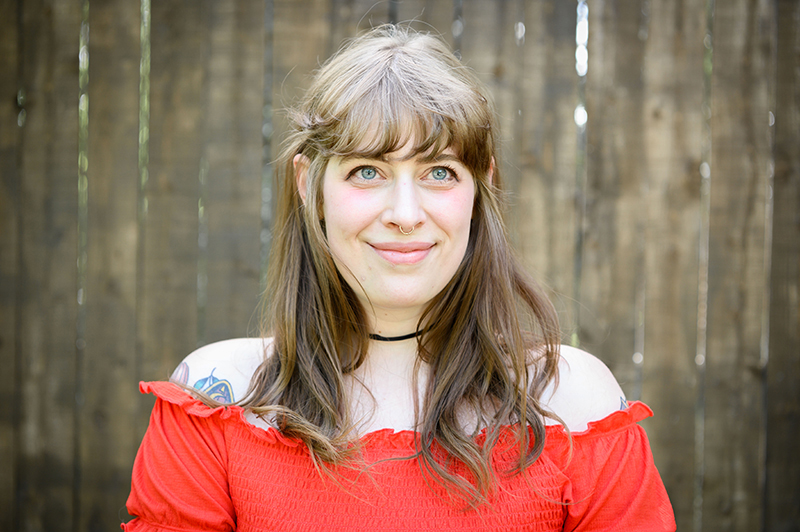 Cover artist Ashley Love is a colorful child of complicated circumstances, one whose artistic career speaks to the warrioress-like resilience she’s employed in her young lifetime. Having come from challenging cultural origins into the world of game design at the crucible of #gamergate, to the convention circuit as a multimedia artist, Love’s work is resplendent with powerful archetypes, iconographies and metaphors.

“I feel like my art is always changing … so maybe my identity is always changing. I’m feeling more confident. I’ve always used my figures to explore my own insecurities,” Love says at a window seat in Les Madeleines cafe on a cool Saturday afternoon in June. She’s put away her sketchbook and impressive pile of artist’s ink pens to focus on our dialogue. Across from the cafe, the bustling Utah Arts Festival is in full swing, lending to the vibe of our coffee chat with one of the city’s most adept young visual artists. Love is a beaming embodiment of her artistic aesthetic. She seems as though she crawled out of the pages of The Canterbury Tales, dusted off her laced bodice and sheathed her dagger just in time for our lunch date.

“Something I get asked about is the religious symbolism. A lot of what I put in my art is Catholic symbolism. Both my parents grew up FLDS, so polygamy is kind of a part of my family—and the sort of cultish stuff,” Love says. “I’ve been an atheist since age 12 and pretty comfortable with it and still dealing with that through my art.” Love’s illustrations depict the dichotomies of pretty, blushing femme energies with dour, dark and existential imagery. “I’ve always liked cute and typically girly stuff, but I’ve also been into metal music since I was a kid,” Love says. “I’ve always been interested in the morbid, and I’ve tried to bring those parts of my identity together.” Love’s abundant array of visible tattoos affirms her personal and professional ethos, with her right arm in full-sleeve replete with a knight’s gauntlet, flowers and a charmingly true-to-life elephant beetle. It seems that everything Love lives and represents is art in itself.

Though her works often defy genre, Love identifies a sort of realm in which she plays as an illustrator and what inspired her to land within it. “A lot of the influence is artists I follow, like Matt Graves and Tara McPherson,” Love says. “Honestly, [defining the genre] started with Instagram! I’ve had a hard time labeling my artwork and putting it into a category, so pop surrealism just felt right.”

“People feel like digital art is ‘cheating’ because you can fix something. It’s all still art.”

Love’s background was earned through genuine commitment to the craft of narrative and imagery via a degree in film with an emphasis on game design. “I really like storytelling at the base of it—that’s why I’m doing more comics as a ‘means of storytelling.’ Love is also recently dabbling in erotica, including a “Red Light District” on her website. Usually, the reception is surprisingly positive, as Love attests, referring to the loudly pink-toned color scheme of her work with the sometimes gruesome, sexual and existential nature of the images themselves.

Love works in a panoply of materials in many of her visual artworks, including pen, watercolor and digital combinations. “I went to school at the U for video game design, which was [heavily] digital art then [I came] back into watercolor after that,” Love says. She speaks about a somewhat artificial divide between “traditional” artists and digital artists, adding her opinion that “it’s stupid. People feel like digital art is ‘cheating’ because you can fix something. It’s all still art,” she says with passion and just a hint of appropriate indignation.

“I like the idea of being aggressively feminine. I feel [that] being feminine is like wearing armor.”

Love’s academic pursuits landed at a fulcrum of cultural upheaval for her field. Love says, “The year I got into the program was #gamergate; it was rough … I didn’t know if I felt safe to be there anymore. I graduated in 2016, and a lot of the games jobs had moved out with Disney, EA and Avalanche leaving, especially for California,” Love says. This was a less-than-palatable notion for Love and her partner. “So, I started doing festivals and conventions, and it began to work out!” Love has been on something of a hiatus this year after a big push toward the festival and convention career path. “This year, I took a break. I was super burned out. When you’re traveling and working, venues and people are just walking past your table all day, it can be demoralizing. She attests to the numerous roller-coaster-like pitches of the traveling artist’s lot, rife with “lots of low lows and high highs!” she says.

Now at the midpoint of the year, Love is dabbling in comics alongside her illustration work, which has often integrated imagery of female and warrior archetypes. “I’m interested in folklore and history. I love Carl Jung and the idea of consciousness as an accumulation of ancestry and all the people who came before,” she says. Love’s empowered adoration of feminine form and cultural associations with femininity stand out across her entire portfolio. “I like the idea of being aggressively feminine. I feel [that] being feminine is like wearing armor. It’s kind of scary to be ‘girly’ because you’ll either be pined after … or you’re not beautiful enough …or you’re gonna get assaulted. A lot of it is about overthrowing power structure because that’s something that was taken family away from me; I haven’t seen my real grandma since I was 7 or 8, and a lot of that was because of fear created by a powerful system. Sometimes fear is greater than love,” she says in a pensive tone. “I wanna take down power structures that subjugate people.”

Love’s collaboration with SLUG has included the design for the 2017 Pride Parade T-shirt: a charmingly chubby unicorn in sparklingly queer glory. This year, her cover illustration for our DIY issue about the 11th Annual Craft Lake City DIY Festival Presented By Harmons. has been especially meaningful for her. She says, “Working with SLUG has given me back some of the opportunity for collaboration I had in game design. I’m really excited. I love the Craft Lake City environment, and I’ve made a lot of friends and community there. I’m really happy about the cover illustration. I’m kind of nervous about it too. I’ve never done one this widespread, so I don’t yet know how it will be received.” With the finished product already complete at the time of this interview—yet keeping it a secret at the time—Love is somewhat tight-lipped about the piece. “We wanted to do a female-identifying warrior in the process of creating. I’ve wanted to do a SLUG cover for a long time. It felt like one of my goals, like I had ‘made it’ somewhere. I’ve been a fan of SLUG since I was a teenager, so it’s a huge deal for me and doesn’t feel real yet,” Love says. “I see the racks of the current edition in shops, and I’m freaking out thinking about how my stuff is gonna be there!” For her foray into this year’s festival, Love will have some new offerings at her booth. Love says, “I’ll have T-shirts this year. I’m really excited about them. People have been asking about that for a long time!”

“Even though my stuff is very pink and girly, I love the aesthetic of doom metal bands.”

As for her process moving forward, Love is playing in both familiar and novel formats. “I’m doing a lot of comics and panels right now. Everyone and their mom has done a tarot deck, and I’m trying to do decks, but I want to do something different using weird archetypes. I’m also gonna do more conventions this year—apparently, a lot of people missed me,” Love says. Last year, she did a Pinktober project for the month of October wherein she released a massive amount of her traditionally blush-hued artworks every day for a month. “It’s exciting and exhausting! It’s one piece every day!” Love intimates that she may push through another such month-long artwork challenge in the fall while remaining open to the possibilities of the remainder of the year and beyond. “I love fashion and designing shirts. I’d love to do more apparel design. Eventually, I think I’d like to have a brick-and-mortar setup but haven’t quite figured it out yet. Maybe a dispensary art gallery,” Love says. She laughs gleefully at the notion of an empoweringly pink-washed shop dedicated to her artwork and accessibility to the ever-elusive cannabis culture in Utah.

“Sometimes fear is greater than love.”

As for her other dreams on the horizon, Love ponders the fantasy of collaborating with more musicians. “I would love to work with some bands on album covers,” she says. “I’ve worked with Nick Passey’s solo record locally.” She refers to the clever imagery on Folk Hogan member Passey’s 2017 solo release, Just Working Through Some Shit. “Even though my stuff is very pink and girly, I love the aesthetic of doom metal bands like Sledge. I love the ’70s horror aesthetic, too,” Love says. For more than a moment, we humorously detour to muse on the potential delightfulness of Love designing an album cover for Perturbator.

“I’d love to work with Castle. They’re a more traditional heavy metal sound that’s female-fronted and very medieval,” Love says. As we meander into the wilderness of her artistic-career aspirations, it’s clear that Love loves what she does, that love is entirely the heart and soul of her creativity. Everything from her training to her portfolio indicates that Ashley Love is a name you’ll want to remember.