SLUG Mag Soundwaves
Episode #392 – Homephone
00:00 / 17:29
Spotify Stitcher
RSS Feed
Share
Link
Embed
The theme that Brian Taylor created for the participating artists was for each artist to choose a band and screen print a black light poster about said band—some of the artists stuck to the theme and others went their own direction. The idea also molded into a collection of several artists’ versions of the quintessential psychedelic black light poster. The show was an intimate gathering of the who’s who of the printing community, and those of us that did attend sure as shit wished they had a draft card to burn. 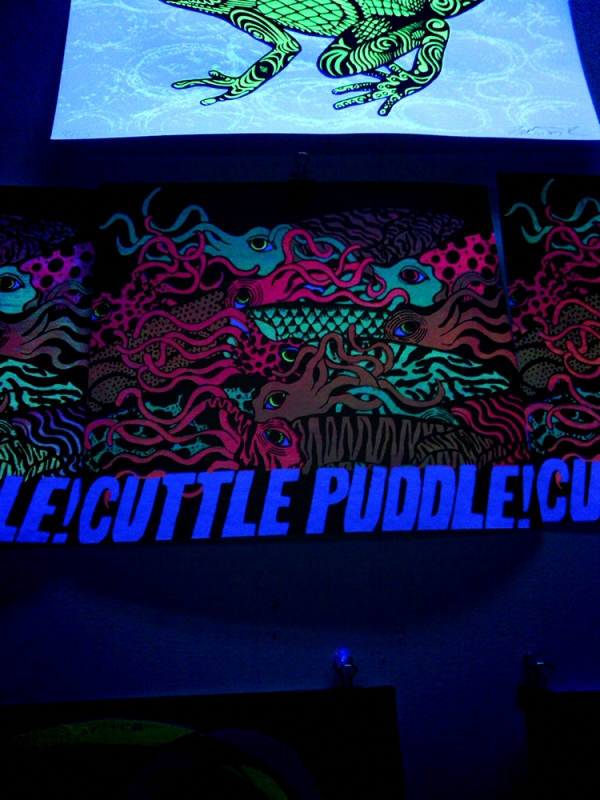 My Grandma always warned me to steer clear of those pot-smoking artist types who listened to Led Zeppelin, had black light posters on their walls, and a lava lamp somewhere in the corner of their room. She said they were lazy draft dodgers who lacked personal hygiene and they were the singular reason birth control was invented. She also said that the Jews had control over all of the world’s money, that you could kill chigger bugs if you covered your legs in clear nail polish, and that shooting deer directly off of her porch was hunting. She meant well, bless her heart, but needless to say she wasn’t always correct in her senile thinking. I would definitely have to disagree with her in regards to black light posters and those who owned them are part of the reason the pill was created. It is common knowledge that the Beatles’ music and their reference to “holding hands” is why the pill was created, not the music of Led Zeppelin or Robert Plant’s bare chest with those wonderfully tight pants.

No one coming to see the Copper Palate Press Black Light show last Friday for Gallery Stroll was wearing love beads and ball-hugging bell bottoms, unfortunately. I certainly didn’t see a lava lamp tackily placed in the corner of the room, no incense was burning and I’m pretty certain no one was carrying a Vietnam-era issued Canadian passport. However, I think someone mentioned going on the pill when the DJs played “Strawberry Fields.” Brian Taylor and Cameron Bentley, who both oversee the art shows and events that take place at Copper Palate Press were among those who participated in the show, as well as the geniuses who put on the black light show. Taylor enthusiastically commented, “I have always been into black light posters and glow in the dark images … It was something I always wanted to do and show them off to the public as well … Playing around with black light posters makes you feel young and juvenile.”

Besides Taylor and Bentley, several additional artists took part in the show including Robin Banks, Evan Jed Memmott, Trevor J. Dopp, John Andrews, Dave Boogert, DUSK, Sri Whipple, Michael Walton and Meg Charlier. The theme that Taylor created for the participating artists was for each artist to choose a band and screen print a black light poster about said band—some of the artists stuck to the theme and others went their own direction. The idea also molded into a collection of several artists’ versions of the quintessential psychedelic black light poster. One of my personal favorites was Dopp’s screen printed neon-colored layers of cuttlefish which he titled “Cuttle Puddle.” I can’t think of a better version of cuttlefish hanging on my wall that are not only illuminated in black light and printed in 3-D, but also makes you feel like the ocean just gave you a soft kiss on the lips.

Charlier contributed to the show by printing a band poster for the much-anticipated reunion show for the local band Vile Blue Shades at Urban Lounge this upcoming Halloween. The image depicted a part-horse, part-human covering her breasts and the head was made up of three hands spelling out the initials “VBS.” Charlier commented on why she chose to take part in the black light show: “The black light show has been a fun tradition of Copper Palate’s,” she said. “Really grateful to those guys for being so fun and creative.” Whipple busted out his signature smooth painted strokes to create what looked like a black light cloud without linking a band name to his poster. He instead opted to create what looked black light cotton candy on paper. DUSK and Dopp did a collaboration piece of a cat on its back playing with a desk lamp’s power cord that seemed to be one of the most popular of the pieces based on the fact that a cat playing with a lamp cord is fucking adorable and something most people could watch for hours.

Taylor and Bentley wanted to experiment with different inks, as Taylor said: “We have screen printed with neon inks in the past, but for this show I was after making proper black light posters.” The ambience of the show was staged with illuminated black lights from the ceilings, an eclectic mix of music playing loud enough to make you feel as if you were at a house party, and two walls covered with enough black light posters with such individualized style that you couldn’t help but don some 3-D glasses and move back and forth in front of each image. Taylor and Bentley didn’t stop there. They were both chatting viewers up about which poster they enjoyed best, which artist did which poster, the process of how each one was made, all without spilling a drop of beer. The show was an intimate gathering of the who’s who of the printing community, and those of us that did attend sure as shit wished they had a draft card to burn.