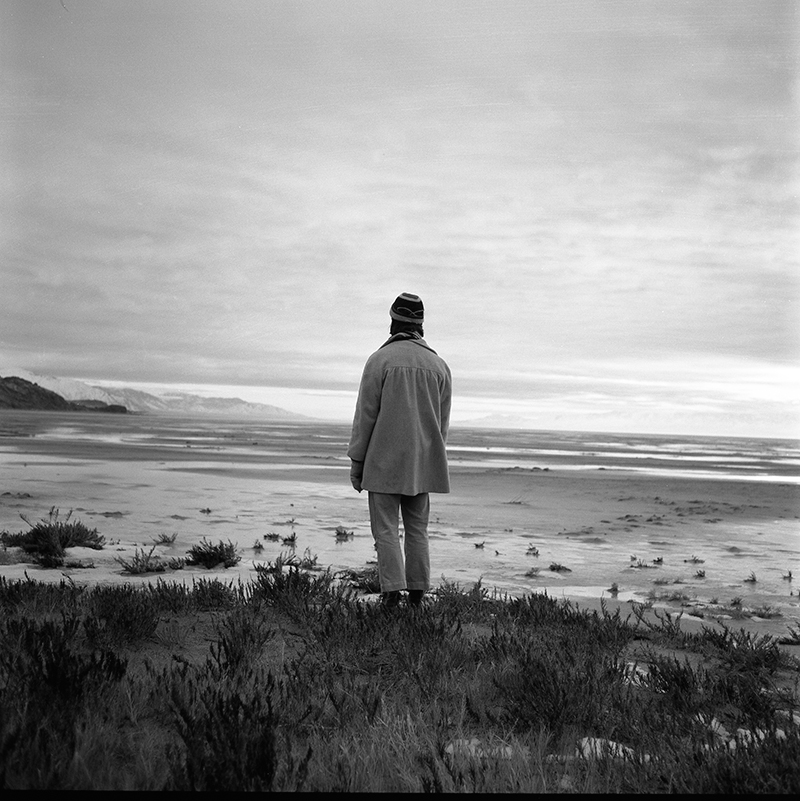 EZ$ Gallery is an unassuming, photography-only gallery tucked away in the Marmalade district of Salt Lake City, behind Stefahn’s Barbershop. Started by local musician and photographer Trever Hadley in 2018 after realizing he had never seen a photography-only gallery, EZ$ has since hosted monthly galleries, giving photographers exposure and a place for them to display their work. “I wanted something small and [it to be] somewhere that new—or experienced, photographers—[could] show [their work],” Hadley says of EZ$.

Amelia England assists Hadley with operating and running EZ$. “Collaboration just kind of rose naturally from my involvement,” she says, “I liked [Hadley]’s commitment to collaboration in general.” England is pushing EZ$ to build a more diverse archive than a traditional photo gallery. “We live in a gorgeous state, and there’s plenty of landscape and astrophotography, but not many small venues dedicated to narrative, point-of-view, happy little film accidents, et cetera,” she says.

The shows that EZ$ has put on thus far span a diverse and interpretive field, ranging from mixed media projects, to photo diaries, to self-portraits. On June 22nd, EZ$ will show the works of photographers Sam Milianta, Isaac McKay-Randozzi, and Jackson Hogg in a show that focuses on square-format film photography.

Milianta is a well-known face in the photography scenes of Utah, with a network of peers spanning across continents. One might say, he’s one of the godfathers of modern film photography in Salt Lake, but any of his close friends will agree that “Oddfather” is probably a more fitting term. A person who often gifts cameras and rolls of film to friends, and is always lending them encouraging words, he tends to shy away from any spotlight himself. His work has become increasingly scarce and hard to come by.

“We live in various shades of grey. The mastery of two spectrums of colors and the complexity of light is enough for me.”

“We live in an age of followers and follower-count, and that is less important to me than the amount of work I put in,” Milianta says of why he’s selective about his output. “I don’t know who said it, but you should take your work seriously, but not take yourself too seriously. The people that stand out are the people that put effort into it. [Photography] means more to me than how it is received.”

He began shooting film in his early 20s, pushed both by listlessness and skateboarding. “I needed a hobby… When I bought my first camera, I had the photography issue of Transworld with me.” Milianta’s photographic work centers around his travels, making zines of his trips to visit friends and cities around the world. He uses a large arsenal of different cameras and shoots in both black-and-white and color on a myriad of formats and different films. Some recurring themes of his work include his friends, skateboarding, street moments, cats, and light patterns.

McKay-Randozzi’s photography is primarily black and white, and as someone who constantly carries a camera and is surrounded by skateboarding, his photography lends a lot to the latter. “We live in various shades of grey,” he says when asked about his preference for black and white film, “The mastery of two spectrums of colors and the complexity of light is enough for me.” McKay-Randozzi was influenced early on by his mother’s best friend, an artist and photographer, and soon after was hooked up with a camera setup. He began to contribute to an upstart website covering San Francisco’s skateboard scene. “As a young dumbass kid, skating opened the adventurous side of my brain,” he says, “When the camera became a part of those adventures… [it became] a partner in the motivation to explore.” You can view McKay-Randozzi’s photographic work at mydumbluck.com.

“You catch some really magical moments, but you miss just as many—if not more—when you’re staring through a viewfinder.”

Alongside Milianta and McKay-Randozzi, Hogg will also be showing some of his square photographs. Hogg’s photography stems from an intrinsic point-of-view, photos that are vignettes of the world around him. A native of Ogden, Hogg has been shooting film for about ten years. He states that the process of shooting film and carrying a camera around helps him “get into stuff, around stuff, and past stuff physically and emotionally.” Hogg hopes that his photography on exhibit can leave viewers with an appreciation of themselves and the world around them, but accepts that you can’t always be glued to your camera. “You catch some really magical moments, but you miss just as many—if not more—when you’re staring through a viewfinder,” he says. Hogg’s intimate photography can be viewed on his Instagram, @islandjacky.

Stop by on June 22nd to view the medium-format centered show at EZ$. England states that EZ$ is intimate and feels magical in the summer. “There is a side door with a lighted sign that says EZ$. Enter there. The solo shows are elegant, and the group shows are a party. I hope the whole thing feels like a gem,” she says.

Roughside of the Lens Presented by Monster Energy, Half and Half Skate Shop and Roughneck Hardware
Skate Photo Feature: Levi Faust