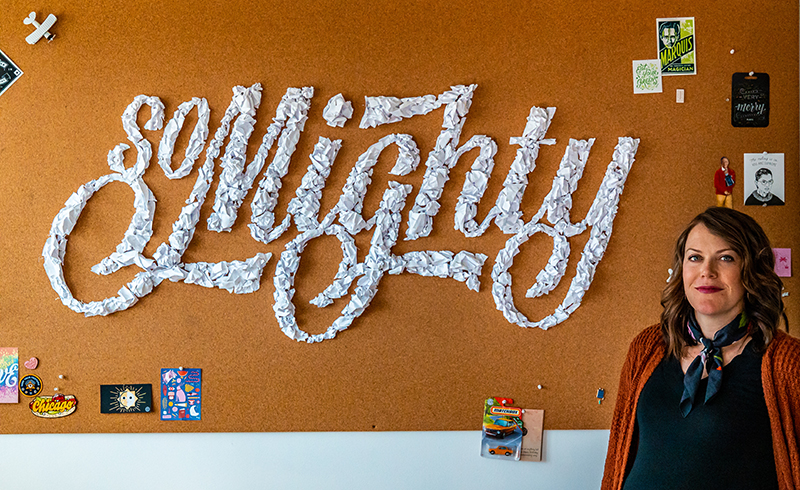 Learning the Power of Letters: How Becca Clason Turns Words into Art

While working as a Junior Art Director at a firm in New York, Becca Clason quickly realized it wasn’t all she had hoped. After a year at this job, Becca moved to Salt Lake and focused on her next journey, a graphic design job. “I’d made lettering in the past without even realizing what it was,” she says. “Being able to put a name to it and realize that it was an actual career path gave me a lot of motivation to practice and improve and make it my career path, too.” This change would lead Becca to establish her own venture, LetterWest, a conference where lettering enthusiasts can “improve their craft and business skills, meet and learn from industry leaders they admire, build face-to-face friendships with their peers and do it all in the spirit of inclusive community,” she says. Along with this, Becca realized a local art popup, the Love Letters Museum, where she served as a curator in this large-scale, love letter to words.

Working as a corporate designer in SLC, Becca would spend her days fascinated by design blogs like Jessica Hische’s Daily Drop Cap and Erik Marinovich’s Friends of Type. “They were my first introduction to lettering, and I felt like I’d found my calling,” Becca says.

As a result, Becca was inspired to try out different techniques, such as creating words out of physical objects (like her work in the Love Letters Museum) and learning more about stop-motion production. “I found myself in a creative momentum cycle that brought me a lot of joy and satisfaction, as well as improving my skills,” she says. From there Becca landed various freelance tactile writing gigs, where she would create words out of objects like food or flowers. With her job ending, Becca’s decision to start her own lettering business was easy. Along with husband Josh Clason, who had been helping her behind the scenes for years, they founded their full-service stop-motion studio, So Mighty, named after their son, whose middle name is Mighty.

“We wanted it to have some layers of meaning, if people were interested in looking for and seeing them.”

Through So Mighty, the Clasons and In-house Editor Matt McDowell have created stop-motion and tactile lettering content for companies like Charles Schwab, Nordstrom and Facebook, as well as content for Xfinity/Amazon Prime to promote their shows Jack Ryan, The Marvelous Mrs. Maisel and Homecoming.

Becca has also made her mark more locally with the LetterWest conference, where lettering professionals host classes on all things lettering—from different lettering techniques and practices to elements on the business side, such as billing for works or a panel about the importance (or unimportance) of having an agent. The LetterWest conferences and retreats were designed intentionally by Becca to provide “something … where everybody attending understood and related to the type of work everyone else was doing,” she says. Becca has given the niche community a place to congregate and share nothing but their own type of art. She would like LetterWest to grow even larger so all those interested in lettering—either professionally or for fun—can have access to it.

Recently, Becca wrapped up a pop-up exhibit at The Gateway, known as the Love Letter Museum. The exhibit is her, Josh’s and John Connors‘ (curated the Hall of Breakfast pop-up) brainchild and was based around her love for lettering, typography and the alphabet. Bringing in Connors’ partner, Sophie Weichers, they all worked together and created “a place where we celebrated the alphabet in its many forms, from an individual letterform to creating a word, a story, a book, to help people consider that everyone can be an artist and everyone has a story to tell,” she says. “We wanted the exhibit to be more than just fun photo ops. We wanted it to have some layers of meaning, if people were interested in looking for and seeing them.”

“Following your dreams and being creative is important, but without people in our lives that we love, it would all be meaningless.”

Becca brought in local artists Jill De Haan, Ann Chen, Tayler Mitchell, Skyler Chubak, Hayley Barry, Matisse Hales and husband-and-wife team Fell, as well as some friends outside of Utah, such as Craig Winslow, Stefan Kunz, Mark Caneso, Elizabeth Gray, Joseph Alessio and Lisa Congdon. The exhibit also featured her own creation: large-letter words  on a foam base spelling “Write On” made from hundreds of erasers and over 6,000 pencils. “It’s always a cool feeling to make something that didn’t exist before, and it’s even cooler when a lot of other people are able to experience it as well,” she says of the gathering.

While Becca’s success makes her extremely busy, she also has her priorities straight. “Following your dreams and being creative is important, but without people in our lives that we love, it would all be meaningless,” she says. “It’s important for me to continually try to find a balance between my family and professional work. Relationships are always the most important thing, and sometimes we forget that.” Perhaps that mindset is why she’s been so successful in not only her work, but within creating a local lettering community as well.