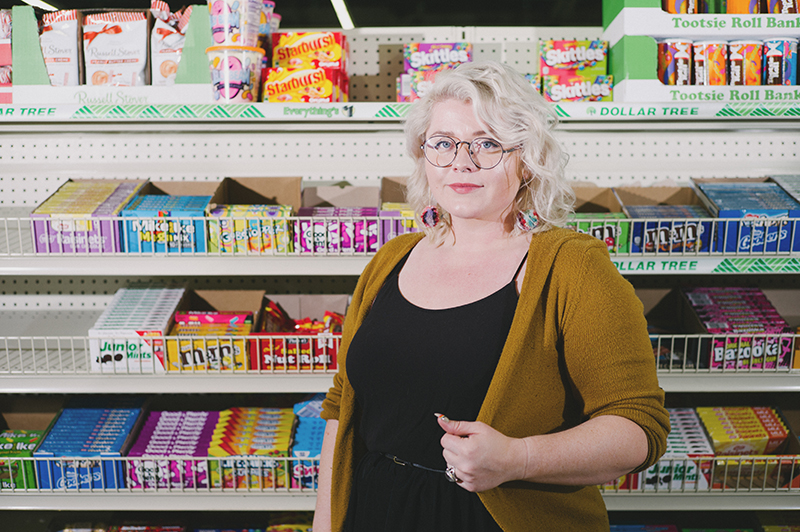 As a photographer, artist, DIY artisan and an adjunct instructor at Weber State, Jamie Harper is something of a polymath in the local arts community. Starting from humble beginnings as a photography student at what is now her place of work, Harper now runs Harper Made (her vintage craft company) and has reached new heights as a photographer and artist. “In the beginning, I was making work that was very personal to me,” she says. “Now, I’m not too far from that place, but I’m starting to speak on things that are a little more universal or a shared experience.”

A key aspect of Harper’s work is her self-aware engagement with different types of media. “I really like the conceptual aspects of [photography]; it isn’t just two-dimensional or formal art,” she says, preferring work that is “performative” or “functional” over that which is strictly visual. Harper’s resulting works have been as wide-varying as a performance piece at the now-defunct CUAC where Harper built a brick wall around herself as a means of working through her troubled relationship with her sister, or a recent exhibition where participants ate photographs—one of which was a glamour-shot-like self-portrait—off of a cake. “The instantaneous viewing, then consuming, then throwing away” of this edible art piece was especially interesting to Harper.

“Let’s not be so worried about [Instagram]—it’s just a new communication tool.”

Ephemerality has become a greater focal subject for Harper, an artistic curiosity that stems from the effects of Instagram on the contemporary art world. “I’m very interested in the experiential nature that the internet provides now with consuming art,” she says. While many artists would perpetually point out the flaws in the 24-hour stories or the tiny phone screen resolution, Harper has a bit more optimism about the platform’s potential use: “Let’s not be so worried about it—it’s just a new communication tool. I like the idea of making people participate with my work through that platform—whether they want to or not.”

While Harper readily names her influences (among them Levi Jackson, Cindy Sherman and her mentor, Josh Winegar), she is equally intent on using these artists’ work as more of a springboard for her own ideas than a source for imitation. A specific example comes in the work of Richard Mosse, who famously pioneered a film technique that turns photographs of green forests pink and purple. Landscapes for Her was a recent exhibition at EZ$ where Harper displayed massive, pastel-pink landscape photos, is clearly indebted to Mosse’s work, though Harper makes a point of distancing herself from his style. Her use of pink film effects is less purely aesthetic: Instead, she uses the colors to highlight the nuanced, overtly gendered message outlined by the exhibition’s title.

“I’m making these landscapes pink to overtly indicate that women have a place within photographing the land.”

On top of the larger, more arresting version of the pieces, the Landscapes for Her experience was compounded by smaller editions of the photographs meant to embody a consumerist version of Harper’s vision. The large versions were shot with a typical 4×5, full-swing land camera, a further touchpoint toward the landscape works of old that Harper wishes to build off of. Of the other side of the exhibit, Harper says that “I thought a lot about the pink tax. I pinned up 25 tampon-shaped pink bags and specifically wanted them to resemble this little bag that women carry around with feminine hygiene products.” Much of this drive comes from Harper’s view that “women are born consumers,” and Landscapes for Her aims to both understand and subvert this forced socialization.

This feminist perspective, from which Landscapes for Her was drawn, is a defining force in Harper’s work—not just in her content, but also her approach to the medium of photography at large. “The act of photographing is kind of aggressive and male,” says Harper, noting the detached way in which landscape photographers typically address their subjects. “That’s what [Landscapes for Her] is about—I’m making these landscapes pink to overtly indicate that women have a place within photographing the land,” she says, pointing out the parallel of the land’s fertility. Harper intentionally moves away from a stark presentation of Western American landscapes, instead using her unique perspective and philosophical lens to draw a meaning out of the land that she sees as missing in the landscape works of the past.

On top of a upcoming book focusing on estate sale photography, Harper hopes to continue working with EZ$ and refine the curatorial approach to her exhibitions there. As always, though, her primary goal moving forward is to  “continue to gently push,” she says, “push the medium—what I’m talking about, what needs to be talked about, push what I feel I owe the medium and the art world.” Whether it be with more adventurous photographing techniques, more demanding concepts or a greater engagement with digital media, Harper’s forward trajectory spells nothing if not innovation: “Especially as I experiment with interacting more with my viewers, I have to evolve.”