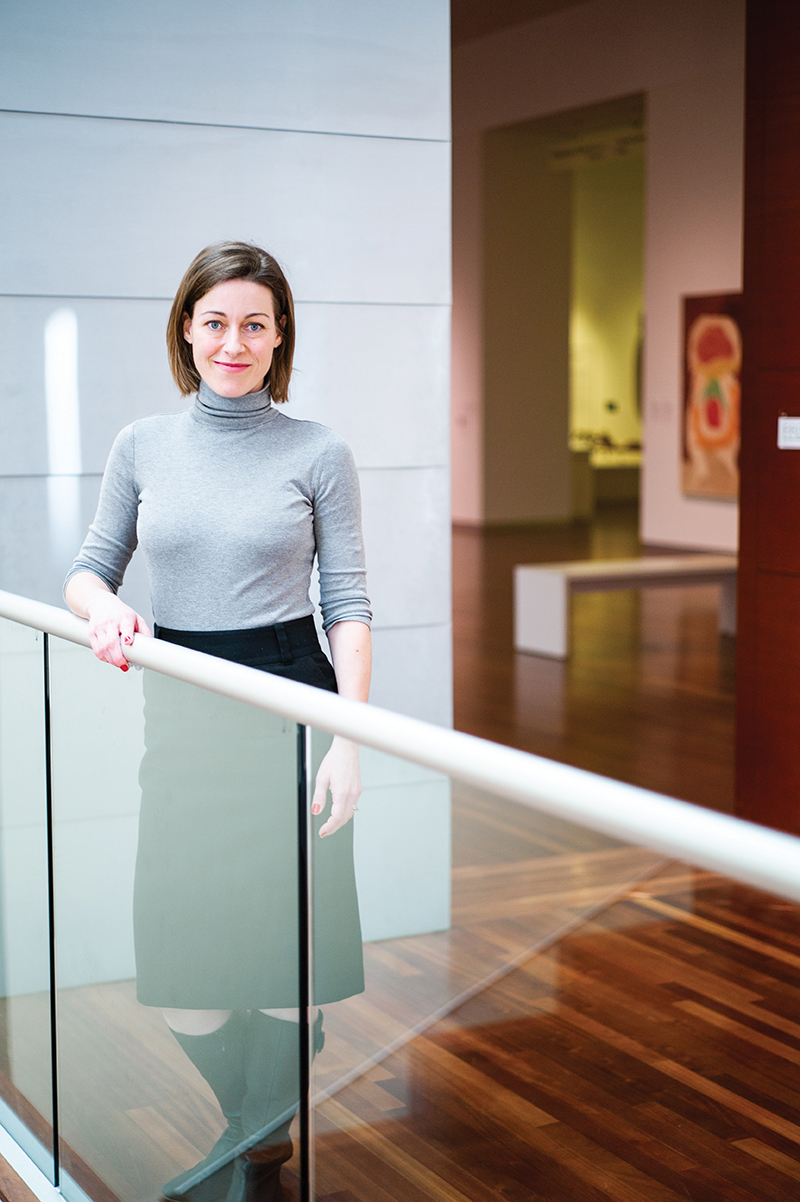 The work of an artist who died over a decade ago has been installed in the Utah Museum of Fine Art (UMFA). This may not sound uncommon, except the piece on display was created February 2019 yet is an original. How is this possible? Lewitt is primarily known for his wall drawings. These drawings were conceived as a set of instructions and often carried out by people other than the artist himself. The instructions leave room for variation, such as using the word “or,” which leads to an end result led by the artist, but not explicitly.

UMFA recently acquired LeWitt’s Wall Drawing #33, created in 1970. But instead of receiving a canvas and installing it, an authorized draftsperson from his estate came to Utah to oversee other draftspeople—chosen from local student applicants—install it. UMFA Senior Curator Whitney Tassie says of the significance, “It’s one of the earliest examples where the artist was courting that level of variability and empowering the draftspeople … so the draftsperson gets to do one [colored-pencil line], or three of them or two of them.”

This may be confusing to many people who think an artist has to put paint to canvas or a chisel to stone. LeWitt and his work repositioned the role of the artist. It can be explained by his dictum, “The idea becomes a machine that makes the art.” This conceptual practice is what allows the creation of the art to transcend even the artist’s death, with the artist still receiving attribution to the work. Veronica Roberts, Curator of Modern and Contemporary Art at the Blanton Museum of Art at The University of Texas, says, “Conceptual art opened so many doors. So much of the great feminist art produced in the 1970s by Adrian Piper, Eleanor Antin and others borrowed strategies of conceptual art. Because conceptual art is about ideas and systems rather than a look or style (like abstract expressionism or minimal art), it continues to be useful to artists of every generation.” Roberts gave a free talk about LeWitt at the U of U after the installation. Regarding this specific drawing, Roberts says, “I think that there is something fundamentally appealing about working within a set of rules or parameters. Limitations can be liberating. I think all of us can relate to this. When I go to a restaurant and there’s a 12-page menu, I get overwhelmed and order a hamburger. Having constraints helps spur creativity.”

The piece itself is relatively simple, with lines drawn on a series of squares according to LeWitt’s instructions. This allowed for drafters to be from a variety of backgrounds, not just drawing students. “We have some printmaking [student drafters]. We have some animation, some film, and media arts students. We have a master’s student from environmental humanities, and we have an architecture student, so it’s a good range and certainly [indicates LeWitt’s influence] beyond just the art world. It was fun to read the student applications,” says Tassie. Applicants were selected by Tassie and Alison (Al) Denyer, a painter and art professor at the U of U.

The piece was installed over a 13-day period. The exhibit was roped off, and drafters worked in three-hour chunks, with Sundays off. The museum remained open during this process, so patrons could observe the creation of the reproduction, which will remain on display for some time in the contemporary gallery. “We’ve been dying to install this drawing since we bought it in 2014,” Tassie says. “We didn’t want to do it [earlier than now] because we knew that we were doing the big construction, and many of the walls were getting torn down and rebuilt.”

Having this drawing in the UMFA is special not just because it represents a significant period in the history of conceptual art, but because the piece was produced right here in Utah, where it will be viewed. UMFA understands that a piece such as this might be a little hard to understand at first. Tassie says, “The UMFA welcomes all visitors and strives to hit an approachable tone with installations and didactic material. We hope to spark critical dialogue and to inspire visitors to find connections with their own lives. Because Wall Drawing #33’s instructions can be interpreted in so many ways, it’s a great example of how visitors, rather than artists, can determine meaning in artwork.” Visit this piece at the UMFA (410 Campus Center Dr) open Mon–Sun 10 a.m.–5p.m.