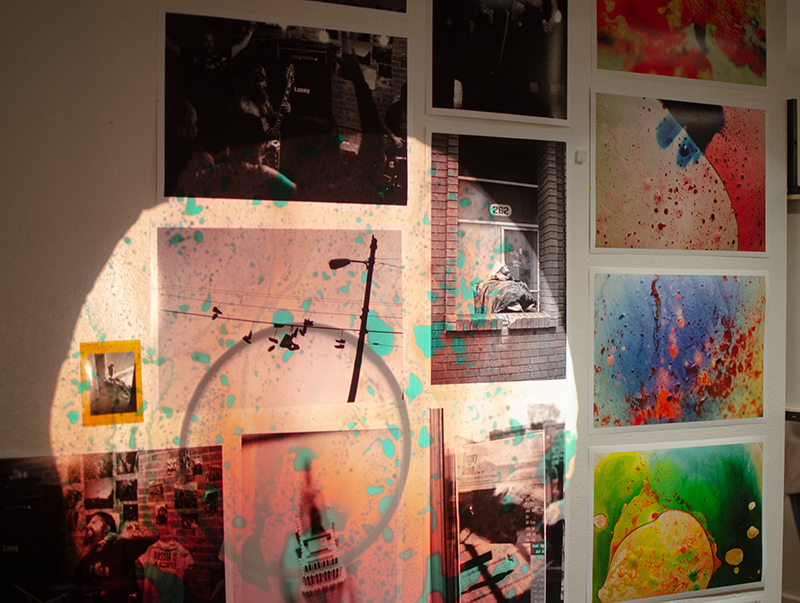 Landon Hale, operator of Sagans Youth art gallery is trying to combat digestible media by hosting monthly pop-ups featuring the work of local artists. Hale began Sagans Youth because, “As an artist, you always get told ‘no’ because your work has never been in a gallery before, and I thought, ‘Well then I will create the gallery so I can tell someone ‘yes’.” Another reason behind the gallery’s creation was an effort to bring back print media, which Hale believes isn’t a popular medium anymore. It’s clear a lot of passion goes into this project—the Jan. 11 Sensory Illusion event was only the third installment of Sagans Youth, and there were an estimated 300 people in attendance. Hale says that he has dreams of hosting these pop-ups all around the world. Along with Hannah Schieving (the co-curator of the event and the person responsible for securing Sensory Illusion‘s venue), Hale set up at Trolley Studios for a night that showcased the fruitful results of Sagans Youth’s mission. Many diverse art works were on display, with the artist usually close by, mingling with the viewers. None of the art was priced (at Hale’s request) so that patrons could enjoy the art as is, and if they wanted to purchase a piece they could interact directly with the creator. “I don’t want a $30 painting hanging next to a $300 painting. I just don’t want that dichotomy of better than or less than,” Hale said.

The atmosphere at Sensory Illusion was friendly and welcoming. This can give creators the confidence to put themselves out there, which is why giving local artists a space to get their work seen without the pressure and competitiveness of a traditional gallery show can be so vital.

The name Sagan’s Youth, Hale told us, came about because of his affinity for the punk band Reagan Youth, as well as his equal affinity for the astrophysicist Carl Sagan.  Hale says that there was a quote from Sagan that stuck with him about, “‘billions and billions’” where he thought, “Yeah, like, there’s billions … of people on this Earth, but only a few are trying to reach for something … create something … make something important out of their life.”

Hale is one of those people. The creation of pop-ups like Sensory Illusion has the potential to change the way local art communities see new artists, as well as help patrons learn to appreciate not only different types of art but the person behind the pieces they gaze at on the gallery wall.