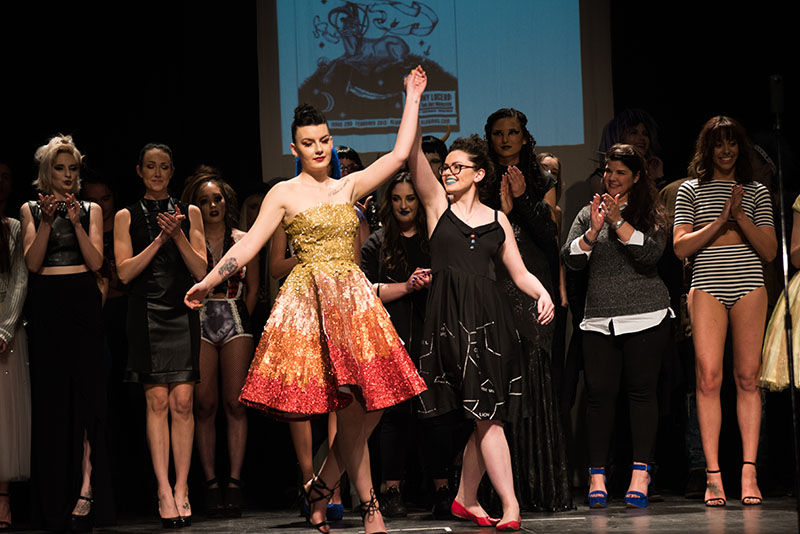 On a rainy, spring Salt Lake City evening, music fans of all ages gathered at The Depot for SLUG’s 28th Anniversary Party Fashion Show. Upon first entering the venue, it seemed to be empty yet full of life. The night went on, getting closer to the time of the show, the building started to fill and the show began.

The format of the show was based on 28 years of fashion to represent the 28 years of SLUG. Starting back in the 80s and all the way to 2016. The designers created amazing interpretations of each year and style, and threw an amazing alternative vision to each design. One of my favorites was a design by Pretty Macabre, who created a very amazing rendition of Freddy Krueger, with knife hands, a bag filled with blood and a Jason mask—recreating Freddy vs. Jason for the year 2003.

Everybody throughout the show and party was having fun, enjoying each other’s company and taking in what these amazing designers created. The show was inspiring and an amazing look back on the 28 years of SLUG Magazine. They finished the show off by bringing out all of the designers and models, one by one, for one last look. All night the whole crowd basked in all the amazing designs.

SLUG Executive Editor Angela H. Brown closed out the show by thanking everyone who made the show possible and reflecting on the past years of SLUG—she also she had a pretty bad-ass outfit. Everyone left feeling inspired and excited about the future of SLUG and our ever-growing Salt Lake culture. –CJ Anderson

And take a look at He Travel‘s VR coverage of the fashion show on YouTube (Part 1/3, Part 2/3, Part 3/3 and Finale) as well as their multi-camera recap of SLUG‘s 28th anniversary.