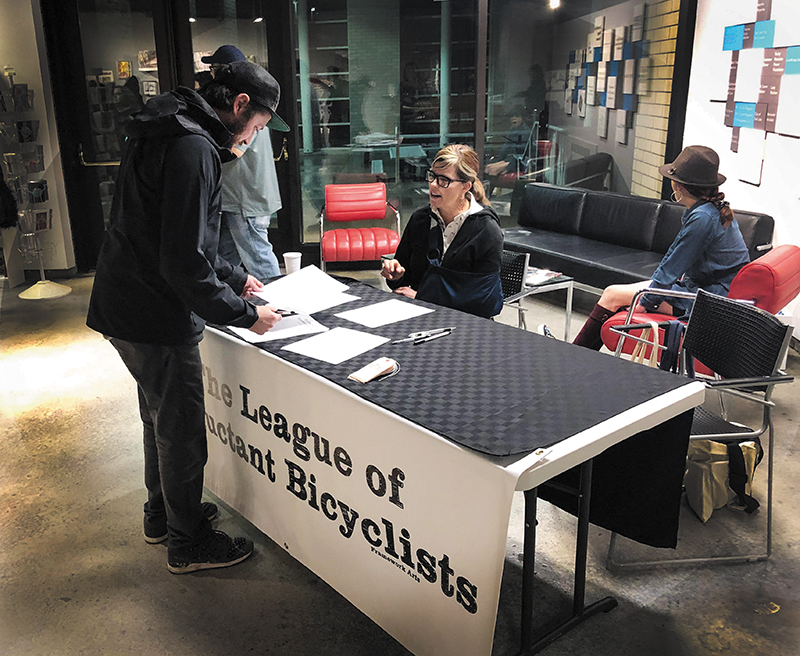 Art in Motion: The League of Reluctant Bicyclists Takes to The Streets

Megan Hallett of Framework Arts has set out on her latest project, The League of Reluctant Bicyclists. It’s a new form of expression that builds upon her penchant for creating public-participatory artwork—a methodology she has developed over her varied professional career. The League is slated to become a living exhibit at the Utah Museum of Contemporary Art (UMOCA) that documents the experience of her 50 volunteers during their month-long adventure.

Hallett’s collegiate background in education and fine arts led her to a nine-year tenure as a curator for the Utah Museum of Fine Art. After that, she built a career as a visual arts teacher for Escalante Elementary and as a professor at the University of Utah in their Master of Art Teaching program. During this time, she has developed a keen eye for opportunities that bring people together. Hallett says, “I am much more of an educator than an artist. I really like setting up projects where I create the parameters and then invite people to work within those parameters. I choose the timeframe and materials, but then people can experience those parameters however they like.”

“My comfort is not paramount to that of my community. Doing this with a similar group of people is the basis of the project. It is both about bikes, and not at all about bikes.”

One of her recent projects was through a partnership with the Salt Lake City Public Library’s Alt Press Fest. During her installment, Wisdom of the Water Closet, she built a mock bathroom stall, and people were asked to leave messages, wisdom and guidance to those who would come after them. “I often think, ‘How do I get people with a variety of ages and backgrounds to engage with these materials to make something together?’” Hallett says.

Rolling into Bike Month, Hallett is finding a way to engage a new subset of individuals by creating The League of Reluctant Bicyclists. Her self-classification as a reluctant bicyclist spurs her to let this project unfold as it will. “I am a sporadic and fair-weather biker,” says Hallett, “but I am also an all-or-nothing biker. Sometimes I will ride everywhere, seven to 14 miles a day, commuting in all conditions. Then I won’t ride for several months.” She hearkens back to a commute in which she was caught in a deluge without proper attire. During her soggy ride home, she noticed another woman in the same position across the street. An emphatic fist pump and “Hello!” was exchanged across the lanes. This was a catalyst to the project and cued her into an entire demographic of people who use their bikes for more than just exercise.

Riding your bike everywhere takes commitment. You have to plan more time, more clothes and, to paraphrase Hallett, you become vulnerable because you lose your physical protection and your anonymity. We as a society are quite caught up in the comforts of automobiles and the luxuries they afford. Being uncomfortable from time to time is something we could all probably benefit from. Perhaps it would even bring us closer together. While the ideas spinning in Hallett’s head gain momentum, the project rolls on. “I’m engaging by taking care at a very local level by making the right choices,” says Hallett. “My comfort is not paramount to that of my community. Doing this with a similar group of people is the basis of the project. It is both about bikes, and not at all about bikes.”

“I know what I put into the project to visually identify what we
are doing, but it’s up to everyone to examine and document what it ends up being for them.”

As the current Educator-in-Residence at UMOCA, Hallett has creative license to explore the kind of work she wants to do. Her creation of a network of unique individuals bound together by their collective reluctance to ride will be on full display. The parameters for this project were relatively thin and revolve around a manifesto she shares with the volunteers—it is part Dada Manifesto and part Stuckist Manifesto. It is a creative take on art culture that borders on the absurd, but those who committed are in for a ride. “Trying to create a project that everyone would understand isn’t possible. We are all developing what it is. I know what I put into the project to visually identify what we are doing, but it’s up to everyone to examine and document what it ends up being for them,” says Hallett.

More than 60 percent of the people in the League are unfamiliar to Hallett and represent diverse demographics. She is excited to see how these people express themselves during the project by completing small assignments and providing photos and documentation that detail their feelings of reluctance and what a month on a bike became for them. Also provided to each member are a hang tag for their bicycle to identify them to other members, a bicycle boutonnière that doubles as a bike light and a small pack of temporary tattoos that gets them benefits from other supporting organizations throughout the city.

Moving into June, Hallett will collect all these artifacts from the League and build the exhibit. Beyond photos, short films and documentaries, it will also include a couple interactive elements such as a pedal-bike station where visitors can experience the thrill of riding through the streets, wind in their hair, as well as news clippings about cyclists read aloud. One goal of this project is to portray how bike riders are depicted in the media and how they’ve become marginalized in an ever-automated society. As mentioned before, it is not just about bikes so much as the people who ride them.

Hallett welcomes all to the show’s opening at UMOCA on June 28. For more info about Framework Arts and The League of Reluctant Bicyclists, visit their website and follow the fun on Instagram @LeagueOfReluctantBicyclists.