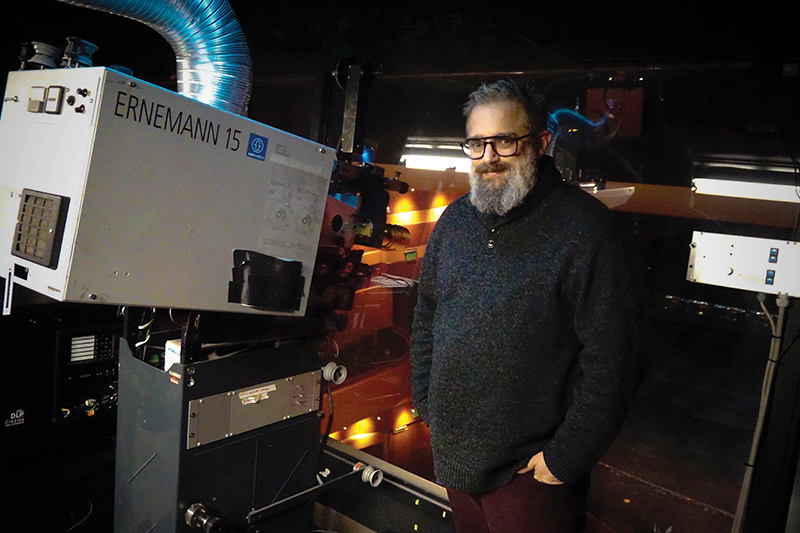 Patrick Hubley widens his hands farther and farther apart, indicating the range of topics featured in Utah Film Center’s weekly and monthly programming. He’s the Executive Director at the Utah Film Center (UtFC), and when it comes to the scope of films they screen weekly at the Downtown Main Library and monthly at the Rose Wagner Performing Arts Center, “We don’t shy away from stuff,” he says. “We’re not an issue-focused organization; we’re a community focused organization. We like to support and engage the community through cinema. We like to create conversations.”

The subject matter that Utah Film Center presents supports this assertion. Many films from festivals, such as Sundance and the Toronto International Film Festival, are featured in the weekly Free Film Tuesdays and monthly Through the Lens series. Festivals offer films of various perspectives and subjects to our attention—but attending their premieres might not be easy, even for Utahns near locally based festivals. UtFC’s Downtown features might ease the burden of travel or extensive crowds. The financial costs of these presentations are generally considerable for UtFC. Yet, Hubley underscores that UtFC’s film screenings provides the public the ability to view and engage with films featured in world-renowned film festivals for free.

Held every Tuesday, UtFC’s Free Film Tuesdays offerings at the Main Library are valuable because of the post-screening discussions about topics that the films address. These could be moderated by the filmmaker or local expert about the issues found in the film.

“We showed Anthropocene, and partnered with The Nature Conservancy and the Utah Center for Architecture as a part of the AIGA’s annual Design Week,” Hubley says. Anthropocene is a documentary that addresses the grand-scale influence humans have on our planet—and the problems therein. “We had a post-film discussion that focused on the man-made, created environments and discussed possible solutions to minimize the impact of manmade structures on the environment. We had architects from a few local architecture firms—GSBS, Architectural Nexus and DFCM—on the panel.”

One Wednesday a month, Utah Film Center holds their Through the Lens screening at the Rose Wagner. This is done through a partnership with KUER’s Radio West. “For the past six to seven years, this series has presented films that push the envelope in filmmaking, storytelling and doing things differently,” says Hubley. This series focuses on the filmmaking element behind the movies they screen, and they’ll invite filmmakers, cast or crew members to speak—in-person or via Skype—in a discussion moderated by KUER/Radio West host Doug Fabrizio.

For Through the Lens, UtFC featured Chained for Life this past November, which is about an actor struggling to connect with her physically changed costar. The latter is played by British actor Adam Pearson, who has neurofibromatosis, a condition can cause facial deformity. The film’s director, Aaron Schimberg, was here for the Q&A after the film. Here, we can see the types of dialogues UtFC wants to inspirit—an audience leaving the film with talking points about beauty certainly has the ability to surpass in value more typical dialogues on Tuesday evenings. These Q&A opportunities facilitate conversation within an environment featuring answers to—or pathways to answer—local audiences’ questions.

Utah Film Center features local films in this series as well because of the local ethos of the partnership with KUER. Tyler Measom is a local filmmaker featured for his film I Want My MTV, which is about the origins and impact of MTV. This film was also supported through Utah Film Center’s Fiscal Sponsorship program, which helps generate funding for selected films. Of course, when it comes to local films, Utah Film Center may even curate a special screening to show work from community members. Such was the case with the film However Long by Jenny Mackenzie, in which we see the story of four women and their battle with metastatic (Stage IV) breast cancer.

Utah Film Center’s role here is to underpin how important it is for creative people to come together through this medium.

For the past 12 years, Hubley has been involved with Utah Film Center, creating this forum while educating and providing tools for the public to experience and connect with under-the-radar films to create a dialogue. “These screenings predate me (not the UtFC),” Hubley says. “The UtFC has been around for 18 years, [since] the mid-2000s … and the focus back then was bringing films like documentaries and other film formats that [weren’t] popular like they are today, and bring them to the public.” Hubley indicates that these films are provided to create an opportunity for public impact and subsequent discourse about their content within the community.

When I ask Hubley about the turnout for Free Film Tuesdays, I get an enthusiastic yet surprising “Great! The Downtown [Main] Library has excellent turnouts,” he says. This is encouraging and also serves as a heads-up regarding when you arrive to a screening—not all theaters have converted to prepaid saved seats, so arrive early if you want to secure a good vantage point.

Hubley wraps up our conversation talking about Utah’s growing place in the film world. Utah Film Center’s role here is to underpin how important it is for creative people to come together through this medium, whether that’s to teach or simply to to create healthy conversation on a local level through film. You can find more information about upcoming film-screenings and other UtFC programming at utahfilmcenter.org.

Editor’s note: This article previously stated that actor Adam Pearson was present for a Through the Lens Q&A for Chained for Life. The guest was actually Chained for Life director Aaron Schimberg, and this updated version of this article now reflects this.