00:00 / 16:39
Spotify Stitcher
RSS Feed
Share
Link
Embed
“I tend to pull from things that resonate with me because they represent a part of my childhood, or a specific moment in my life that I know other people will feel a connection to,” says CLC DIY Fest artist Audrey Patten, speaking of her artwork. The subjective nature of visual art often renders it introverted and inaccessible, but Patten has managed to transcend the self in her work and illustrate an emotion that has become the defining keystone of our generation: nostalgia. 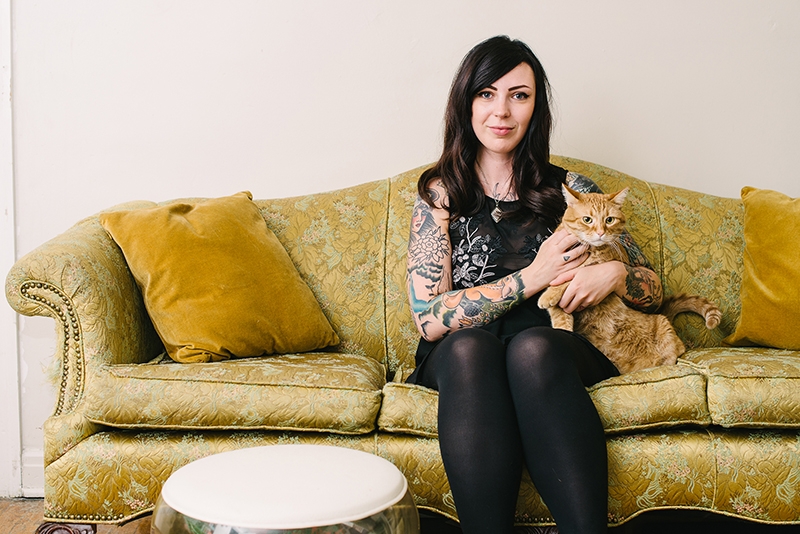 Audrey Patten’s love of animals and everything vintage are reccurring themes in her beautiful, nostalgic artwork. Photo: Chad Kirkland

“I tend to pull from things that resonate with me because they represent a part of my childhood, or a specific moment in my life that I know other people will feel a connection to,” says Audrey Patten, speaking of her artwork. The subjective nature of visual art often renders it introverted and inaccessible, but Patten has managed to transcend the self in her work and illustrate an emotion that has become the defining keystone of our generation: nostalgia. We long for the simplicity of the past as we dive headfirst into our inheritance: a wireless world of tangled social issues. Patten’s artwork pulls the brake on our plunge and reaches backward to fill our walls and mailboxes with warm reminders of childhood daydreams.

Patten was that kid in elementary school from whom you’d commission portraits of your favorite cartoons. “I would draw the characters I saw on TV and what I’d read in books,” she says. Spending most of her life as a resident of Indianapolis, Patten moved on from recess doodles to the city’s Herron School of Art and Design, where she began creating original work, still referencing the pop culture she had grown up with, and melding it with her passionate love of animals. “I relate to them more than I do most humans,” she says. “I would draw an animal’s head on a person’s body, and have been continuing that theme throughout the years I’ve been doing art.” Patten’s art is creepy but pretty, like a dream during a picnic nap—a juxtaposition of contemporary themes with vintage aesthetic—”Sally Draper meets the Scarecrow” is how she succinctly describes her work on this month’s SLUG cover.
Graduating on a high note from Herron with a successful senior show, Patten met Casey Hansen, drummer for now-defunct local band Gaza, while the group was on tour. After maintaining a long-distance relationship with him for some time, she made the decision to sell all but a few of her belongings, and bravely made her way to Salt Lake, romanticizing what life would be like out West. The move served as a growing-up experience that has had a significant effect on Patten’s art. “I think the whole ‘Midwest Meets West’ thing is more of a coming-of-age for me,” she says, “hitting that switch and becoming an adult, and finding myself because, now, you’re out of your comfort zone and you have to find out what’s going to make you happy, and what you want to do.”
An artist whose work is deeply saturated in Midwest imagery, Patten turned to her art to soothe her longing for home. “You get kind of sad, you get homesick— you get bummed about your life sometimes, but you make work that makes you laugh, that makes you feel good in order to be therapeutic, so it doesn’t drag you down more,” she says.
Though her preference and focus in school was etching, Patten currently uses a mix of graphite and light washes of ink and paint on soft rag paper to create the many variations of her work. Many of her more recent pieces have included original images from Wes Anderson films, including a wonderful collage of Rushmore references. “One of the reasons that I connect with Wes Anderson’s stuff is that it has the nostalgic kitschiness to it that I really like,” says Patten. I scooped up her “T. Hanks” thank you cards, printed with a portrait of actor Tom Hanks, the moment I first saw her work. “Most artists, whether they admit to it or not, tend to be influenced by a particular style, of the moment or because of the artists around them,” she says. “Stuff gets recycled, trends happen—as long as I’m enjoying the work I’m putting out and other people enjoy it, that’s what’s important to me.”
Currently, Patten has a full-time job that has required most of her time and energy, which she admits temporarily dried up her creative well. “Ideally, I’d like to be in a position that would ignite more creative parts of my brain, so when I come home at the end of the day, it’s still running, instead of brain-numbing,” she says, confessing a struggle that many artists without trust funds tend to face in their careers. She works quickly, though. In the short time between our interview and the writing of this article, Patten had wrapped up an endearing “homesick” piece, inspired by a bizarre children’s book she was often read as a kid, along with the SLUG cover. She was also working on an unsettling piece based on the sisters from The Shining. Patten has talent and, perhaps more importantly, an attitude that overcomes the challenges she’s had to face. She says, “What’s the point in living life if you can’t enjoy it and enjoy the stuff that you do, and make work that makes you smile and makes others smile?”
Patten claims she is a lone wolf in both the art community and her social life, but she’ll be present at the Craft Lake City DIY Festival on Aug. 9–10 at the Gallivan Center. In addition to creating art, Patten is also a passionate vintage shopper, and has returned from adventures in thrifting with a few spoils she will also have available at the festival. If you can’t catch her in person, take a peek at some of her art at audreypatten.bigcartel.com, her vintage wares at etsy.com/shop/blackfoxvintageslc and follow her on Tumblr: audreypatten.tumblr.com.
Photos: