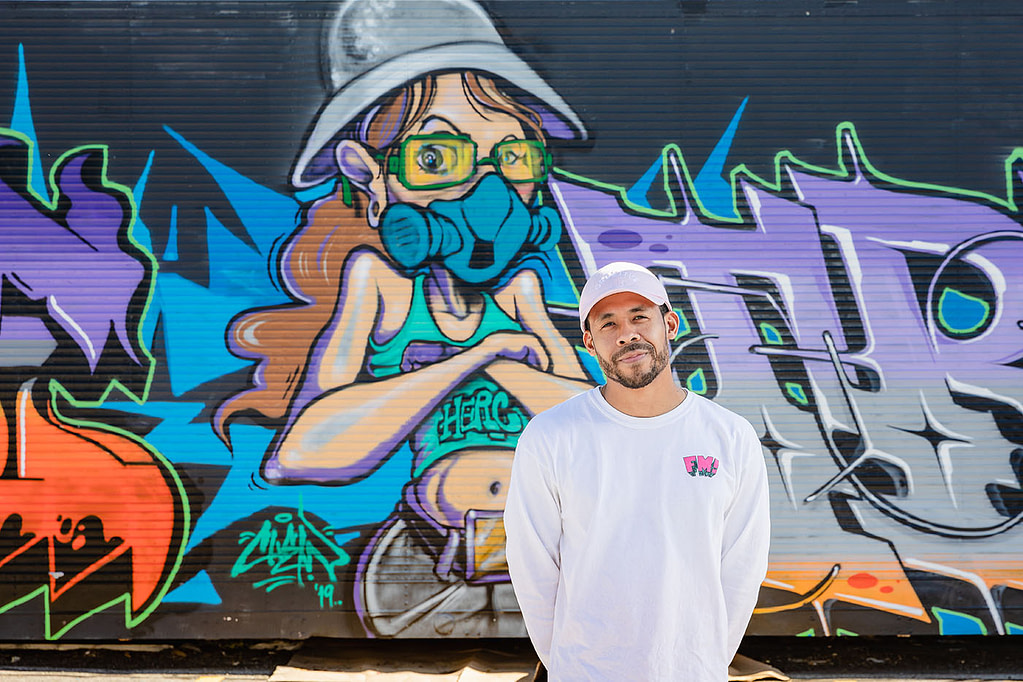 Chris Owens always figured that if he could dance in front of 1,500 people, presenting to a handful of suits in a boardroom would start to feel easier than a rudimentary two-step. After years of breakdance competitions, this confidence accumulated and enabled him to confront his fears and find success beyond breaking. Owens, who designed the cover of SLUG’s July 2020 issue, balances his life between work as a visual artist and his role as Creative Director of 1520 Arts, a Utah-based nonprofit that “showcases hip-hop arts as a viable path to success through practice, performance and education.” It’s clear—hip-hop is the rhythm that Owens’ life moves to.

Since his teenage years, Owens’ personality has been molded by a passion for art and, more specifically, a connection to hip-hop culture. Early memories of his include background music by De La Soul, a room piled high with art materials and a fashion sense that outwardly identified him as a hip-hop head. In his youth, he possessed a rare artistic impulse that kept him constantly designing in order to improve and progress his skill set. When art talent test cards would arrive in the mail—each promising a sum of scholarship money to the best mailed-in drawing—Owens would always add his drawings and name into the submission pool. With this same foresight, he soon observed the value of translating his thoughts and ideas to a digital format. “It was the future,” he says. “That’s what led me to go to college for graphic design.”

Chris Owens’ personality has been molded by a passion for art.

The design that Owens created for the cover of this month’s issue of SLUG Magazine is a tribute to “creatives designing in a confined space,” Owens says. In one sense, it’s a nod to his younger self; sitting in a room and experimenting with drawing and design while hip-hop kept him company, penetrating both his work and his identity. Additionally, this concept seems to examine the period of isolated quarantine that we have all just lived through and might still be experiencing. When the world serves up solitude and loneliness, there is an opportunity to tap into other sources of companionship that can exist within. For Owens, it’s always been hip-hop.

Recently, Owens has created a series of profile portraits of iconic rappers and hip-hop artists. This concept was originally born from an idea to merge user interface with music streaming. In the background of each portrait, there is a large circle that Owens envisions could be filled with album art while a track or album is playing. Once again, this seems to highlight Owens’ interest in paying homage to the past, while keeping pace with progressing technological formats. “Think, modern record player,” he says. Another series depicts big-name rappers from Tupac to Drake as cartoonish, emoji-like versions of themselves. With his own, unique graphic vocabulary, Owens’ work reveres and immortalizes the greats of hip-hop.

Owens’ dedication to the hip-hop world extends beyond his personal dancing and artistry. “Working with 1520 Arts is my way of giving back to the culture that helped define me at a young age,” he says. In 2019, after a decade of programming and an insightful trip to New York, The Bboy Federation changed its title to 1520 Arts after reevaluating their mission and reflecting on their accomplishments. Official 501(c)(3) nonprofit status was acquired in 2012, and programs have been continually expanding ever since. The new name refers to 1520 Sedgwick Ave., a legendary high-rise apartment complex in the Bronx that is often considered to be the birthplace of hip-hop. Regarding the new title, the 1520 Arts’ website says, “It represents more than just the dance and serves as a reminder of what hip-hop could become.”

“Working with 1520 Arts is my way of giving back to the culture that helped define me at a young age.”

For Owens and the founders of 1520 Arts, Josh Perkins and James “Pyro” Karren, the nonprofit is a dynamic way to maintain and grow the presence of hip-hop culture in Utah. Between 2006 and 2008, the trio had noticed that the breakdancing scene was declining significantly and in response, they organized a series of dance competitions called the X-SeriesCC. This series helped renew local hip-hop energy, and it soon transformed into a competitive league in 2009, which marked the beginning of the original Bboy Federation. Since then, the organization remains focused on “promoting hip-hop as a respected and legitimate art form.”

The Hip Hop Education & Resource Center (The HERC), named for DJ Kool Herc (a turntable visionary known for organizing gatherings at the original 1520 location in the 1970s) is a full-time facility dedicated to hip-hop arts in Salt Lake City. At The HERC, 1520 Arts hosts dance, DJ and arts classes, as well as regular drop-in sessions. They Reminisce is a stage production created by 1520 Arts featuring an all-local cast and exploring the various eras of hip-hop as it has evolved through the decades. In addition to these programs, 1520 Arts also offers various afterschool programs and summer camps for underserved Salt Lake City youth populations. These include workshops and classes in painting, dancing and more. Removing barriers to access is central to the purpose of 1520 Arts.

As Creative Director, Owens works on designing new programming and creating partnerships with other entities and venues in order to get events on the calendar. In addition to workshops at The HERC and They Reminisce, which will be showing at the Rose Wagner Performing Arts Center in September, there are also events lined up for the 2021 Utah Arts Festival.

1520 Arts remains focused on “promoting hip-hop as a respected and legitimate art form.”

At the most essential and formative level, hip-hop is the charge of Owens’ identity. When he is not contributing graphic artwork and performance to the hip-hop canon himself, he is sharing the past and present legacies of the culture with others. Owens’ is the kind of energetic force that continues the cycle and keeps it working. He is like the embodiment of evaporation, condensation and precipitation, soaking up hip-hop history and experiences so that he can rain them down upon the next generation and begin the process anew.

More about 1520 Arts can be found at their website, 1520arts.org. Owens suggests that people, especially those with children, check out the various offerings that are open for enrollment now. Donations keep these programs operating and can be made directly via the website. More information can also be found on Instagram @1520arts and @slc_herc, and on Owens’ personal and design accounts @monkee1895 and @evil.monkee, respectively