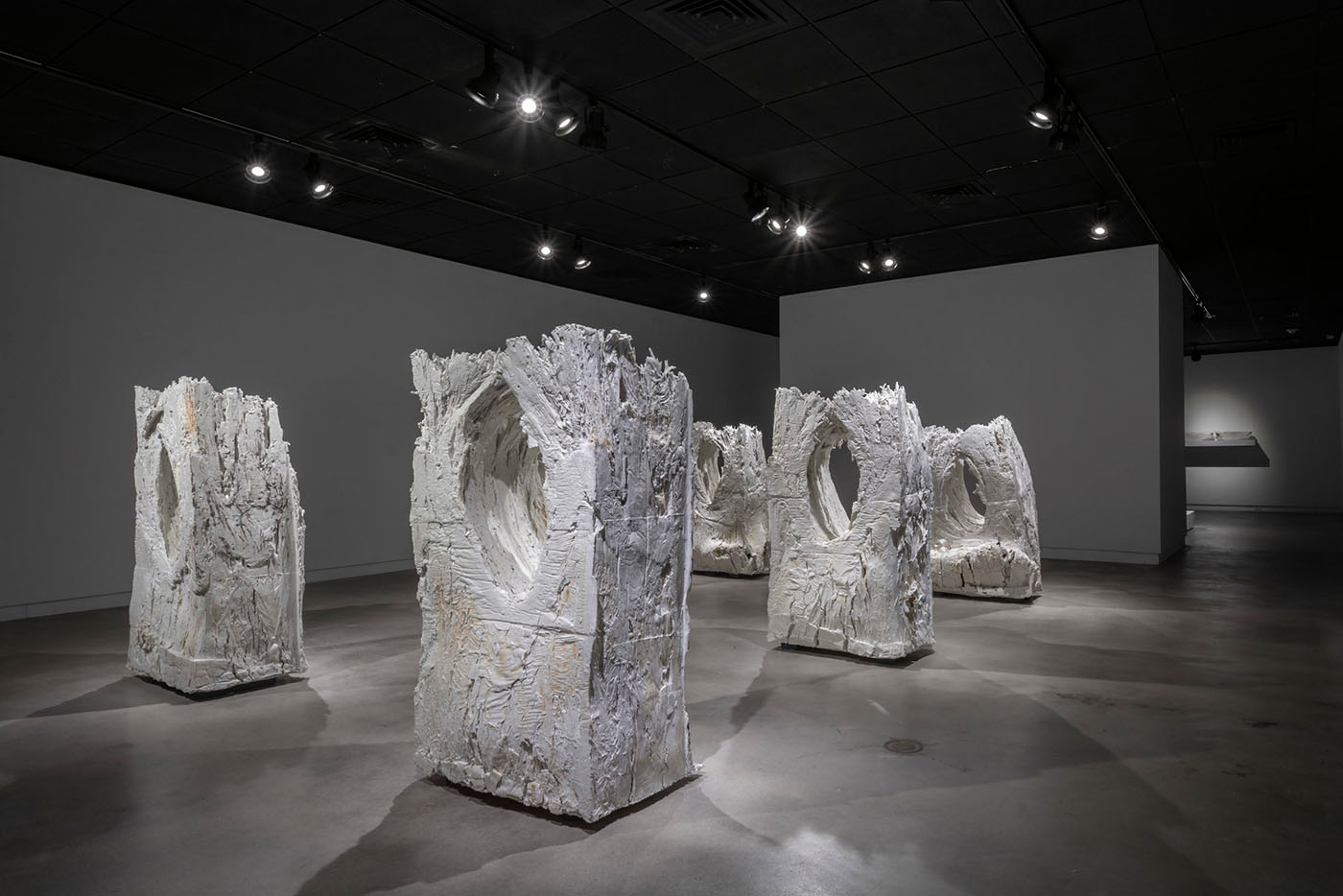 Growing Rocks is an art exhibition at the Utah Museum of Contemporary Art that envelops viewers in between time, catching them pondering their initial thoughts about nature and the very concept of time itself. Artist Brad Evan Taylor does not dabble in small, delicate sculptures, but rather ceramic masses that exist on a human scale, displaying the relation of these masses to the artist’s own body. Another interesting detail is that Taylor’s body is listed as one of the prominent tools in this exhibit’s construction. An important question that Taylor poses to us is, ”What does it take to give an object a sense of deep time, or even lack of linear time?” This question is made apparent by Jared Steffensen, who wrote in the supplementary Growing Rocks book.

It’s easy for the concept of deep time to go over our heads, leaving us confused at what that is supposed to mean. An answer for this dilemma can be found in the first—and most massive—of Taylor’s pieces, “Pyroplastic Deformation Series Concentric Rift II,” which stood in the first gallery room. Upon first glance, I noticed that these pieces have a quiet, unknown peculiarity about them. These had to be carved rocks, right?! A closer inspection of this piece is needed to obtain a complete viewing experience. This piece was not a naturally occurring stone monument, but rather a sculpture of porcelain and rice straw. The exhibition leaflet listed the dates of the pieces: “2015, 2016, 2015, 2018, 2005, 2018.” This is a surprising fact because the pieces mimic a natural occurance that can take hundreds of years to form—not a mere fifteen.

“It’s easy for the concept of deep time to go over our heads, leaving us confused at what that is supposed to mean.”

Growing Rocks has the ability to encapsulate viewers and take them on a journey through a conundrum of time and space, making a detour with each ceramic mass on the way. In addition to the aforementioned installment, there are five other  individual ceramic masses that make up “Pyroplastic Deformation Series Concentric Rift II,” set in two rows of three. Each ceramic mass is growing upwards, formed with the natural materials of porcelain and rice straw. In each mass, there is a hole that’s about the size of a globe. Interestingly enough, these separate masses could be looked at through without any visual interference. This revealed that these pieces were possibly made as one massive piece, and then split up after for aesthetic and artistic purposes. When most people think of ceramic, they tend to think of small delicate pieces that must be handled with immense care. In contrast, Taylor’s pieces are far more grandiose and have much more visual weight, which gives the viewer a sense of the imposing presence of nature that can withstand the test of time.

The next five pieces were in the second gallery room. Shelves housed the smaller ceramic pieces, while the bigger ones found a place on slightly raised platforms. One thing that all of these pieces have in common is the sensation of being surrounded by naturally made objects, rather than those from an artist’s hand. “Compressed Mass” is a ceramic mass that was placed on a small platform and what looked like a giant tortoise shell.

“One thing that all of these pieces have in common is the sensation of being surrounded by naturally made objects, rather than those from an artist’s hand.”

The uniqueness of Growing Rocks relies on the relationship between time, nature and our own knowledge, asking viewers to establish proper links between the ceramic masses and our outside observations of the natural world. There was attention put in the placement and space of these pieces. Each piece can be seen from all 360 degrees, from either close up or from a distance. This shows that the artist is totally transparent about what they’ve created.

In the case of Growing Rocks, the space and placement was part of the exhibition as well. It’s easy to want to spend more time with these faux geographic monoliths and get lost in their sands of time. Taylor did something incredible here with showcasing his love and admiration for nature and ceramics. His most simple message is that we are one with nature, and this can be seen by his faithful creation of synthetic rocks and their relation to the human body, whether that is by shape or by size. This exhibit is a must see.

More information about the Growing Rocks can be found at utahmoca.org. You can also go to the artist’s website, bradevantaylor.com, to learn more.