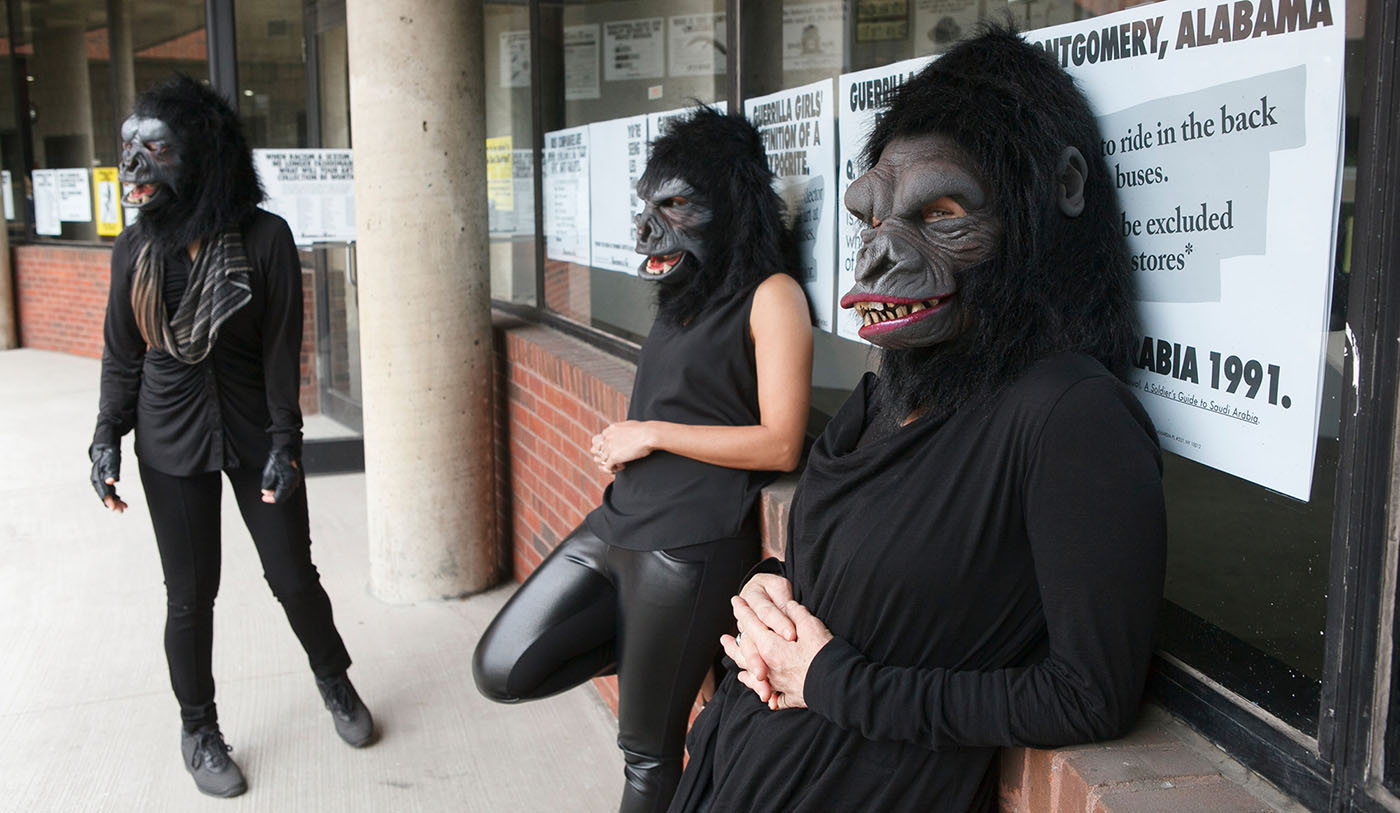 Let’s face it: Corrupt systems never change when you ask politely. It takes active protest —irreverent and undaunted by backlash—to jolt social paradigms in a new direction. This is where the contemporary art and feminist activist group Guerrilla Girls comes in. The Guerrilla Girls retrospective at Salt Lake’s Utah Museum of Contemporary Art (UMOCA), open now through June 2020, shows the group’s in-your-face work that has challenged the underrepresentation of women and minority groups in the art world and beyond for the past 35 years. Käthe Kollwitz, founding member of Guerrilla Girls, hopes the show inspires the people of Utah to stand up for equality and accelerate the pace of change. Laura Hurtado, Executive Director of UMOCA, says that there’s no better time than the 100th anniversary of women’s suffrage to show Guerrilla Girls’ activism and feminist contemporary art in Salt Lake City. As the new decade dawns, we hope that this intersection of art and protest can make Utah a more open and equal place.

“The Guerrilla Girls have been challenging underrepresentation of women and minorities in the art world for the last 35 years.”

In the middle of UMOCA’s Main Gallery, you can see the gorilla face that arched a thousand art-world eyebrows in the Do women have to be naked to get into the Met. Museum? poster, along with the text: “Less than 5% of the artists in the Modern Art sections are women, but 85% of the nudes are female.” The Guerrilla Girls first crashed into mainstream consciousness in 1985, when seven members founded the group to protest the MoMA exhibition An International Survey of Recent Painting and Sculpture, which had only 13 pieces from female artists out of 165 artists, and even fewer from artists of color. The Guerrilla Girls staged protests and then created this poster, one of their most famous works. After this and other actions, museums began to acknowledge how egregiously underrepresented women artists were in their collections. But real change has been slow to come, and this is evident in the show—it’s a catalog of scandals and social inequalities that have not gotten any less ridiculous in the last three decades.

The retrospective at UMOCA features recent work Utah audiences may not have seen and gives perspectives on racism, classicism and current events. The majority of the pieces at the exhibit are small posters with simple graphics and text. These include As Good As It Gets? (1998), which calls out how few women directors had been nominated for an Oscar. The Top Ten Ways to Tell if You’re an Art World Token (1995) tells how few artists of color can make it and at what costs. Deciding how to exhibit such an expansive body of work wasn’t easy, says Jared Steffensen, Curator of Exhibitions of UMOCA. “[The Guerrilla Girls] give you the freedom to select which work you want to include and to decide the scale that they should be printed at … I felt like many people in our community might not know all of the Guerrilla Girls’ work, so it made sense to show as much as possible … from 1985–2018.” On the extent of their body of work, Kollwitz says, “The Guerrilla Girls have done … almost 200 street posters, large-scale banners, videos and books that expose discrimination and corruption in art, politics and pop culture.”

“In the middle of UMOCA’s Main Gallery, you can see the gorilla face that arched a thousand art-world eyebrows.”

This exhibition’s highlight of feminist issues coincide with a couple damning surveys that point out the status of gender inequality in Utah. UMOCA’s 2020 lineup of eight women-led exhibitions, a film series and other activism-centric activities seem like good next steps in the push for empowering women and minority groups in a place with a pretty uncommendable track record. A November 2019 poll of 400 women, conducted by the Salt Lake Tribune and Suffolk University, found that Utah women cite low wages and cultural expectations about gender roles as their biggest challenges, with more than half of Utah women believing they have a lower status than men in the state. But what can you do to balance the scales? To see activist Kollwitz in person (in a cool gorilla mask) and get some ideas, go to her March 9 lecture at the Rose Wagner Theater (starting at 7:30 p.m.).

Although both Guerrilla Girls and UMOCA leadership are excited to take more action in the new decade, “We don’t expect a century of feminism will erase millennia of patriarchy. We’re sure there will be plenty to do in 2020 and beyond,” says Kollwitz. Grab your gorilla masks and create your own agendas to iron out some of these persistent socio-cultural inequalities, Utahns!