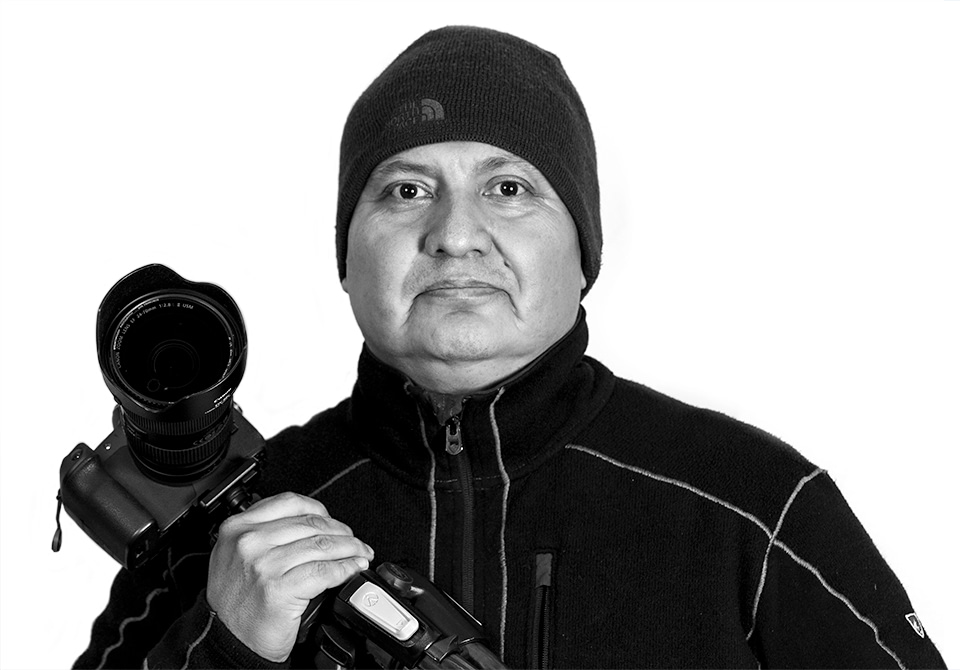 Diné Navajo landscape photographer Eugene Tapahe follows the spirit of the land. In his new project, Tapahe and his dancers take the Ojibwe jingle dresses to native lands. A project born from a dream, The Jingle Dress Project is art meant to heal and unify, and Tapahe couldn’t be more equipped to bring this dream to life.

Preferring to stay in the background, the former journalist found his natural fit behind the lens. From his career with the Navajo Times, Tapahe realized that his tendency to observe is “one of the reasons why I’ve been really effective in being able to advocate for major issues,” he says. It’s the same with his photography: He uses his talents to elevate other voices, be it the land or his Indigenous brothers and sisters.

But his call to photography didn’t start until much later in life. Settled in a career at BYU, Tapahe’s life was changed after a visit with his bed-ridden grandmother. He returned home to Provo with an overwhelming sense of loss: “She used to tell me tales about nature and elements and the animals, and I really [felt] like I was out of touch with that,” he says. Out of love for his grandmother, Tapahe decided to become a landscape photographer as a way of bringing the land to her, since she had become too weak to travel.

“I started just feeling the land and realizing that … I’ve got to trust my heart and my feeling of being Native.”

When Tapahe started pursuing photography full time, he realized that his success would come from trusting himself. He says, “[Eventually] I started just feeling the land and realizing that when I go out to places that I’ve got to trust my heart and my feeling of being Native and take that in perspective.” People started to notice and support the wholesome quality of his art. “It’s beautiful stuff and it’s spiritual. It’s not just about making money. It’s about trying to spread the message of conservation in nature and how the connection between us and nature is important,” he says.

Tapahe had grown and further established his photography business by the start of 2020, with a couple awards and plenty of prestigious art shows under his belt. Then everything came to a screeching halt. With the ensuing turmoil and uncertainty, Tapahe felt hopeless. But one night, a dream came to him with a message of hope, sparking a new direction for his photography. In the dream, Tapahe found himself among the tall grasses of Yellowstone, watching as jingle dress dancers came into the field with the sound of bells and began dancing with the bison. He was filled with a sense of peace and tranquility. When he awoke, his memory of the dream remained. “As Native people, [we believe] if there’s a dream that persists throughout today, it means something,” he says. So he decided to make this dream a reality.

“It’s about trying to spread the message of conservation in nature and how the connection between us and nature is important.”

With the help of his two daughters, Erin and Dion Tapahe, and their friends JoAnni and Sunni Begay, the group made a trip to the Bonneville Salt Flats for a photoshoot. He explains his vision: “I wanted there to be a unification between the landscape and the girls … that they were working together,” he says. Despite challenging weather conditions, they trusted the importance of this project and Tapahe instructed the girls to listen to the land and begin to pose. Suddenly, the weather cleared, causing the Salt Flats and the sky to glow blue. They began their dance, and Tapahe felt the same feeling from his dream: “We could feel the ancestors of that land, like they were there, like they were dancing with them, like they were happy,” he says.

After that first day, the group decided that this project needed to continue, and they started making plans to visit other Native lands. Tapahe chose to maintain the same philosophy he follows in his other photography: using only natural light with his focus on the land. With images for The Jingle Dress Project, he explains how “it’s about the girls being a part of the land … embodying the spirits of the land,” he says. To him, the dancers are not the subject but simply another element of the landscape.

“I wanted there to be a unification between the landscape and the girls … that they were working together.”

The project quickly grew in popularity, and the group used their platform to advocate for important native issues such as MMIW (Missing and Murdered Indigenous Women), signified in the images by a red scarf worn on their belts. “This project has empowered [the dancers] and made them realize how much they can impact the world,” says Tapahe, as he and the girls received overwhelming responses from people all over the world—Native and non-Native alike—thanking them for their message. But Tapahe remains humble: “We’re just a family. We’re no one special. But we followed our heart and decided to do this and we impacted the world. And who’s to say that someone else can’t do this? Anybody can do this,” he says.

There is more healing work to be done with The Jingle Dress Project, with plans to create a photography book and travel to locations in Alaska and Hawaii. See more of Tapahe’s photography and hear some stories behind the images on Instagram @tapahe. You can support The Jingle Dress Project by also following them on social media @jingledressproject and spreading the word. Shirts, stickers and MMIW scarves are available for purchase on their website, jingledressproject.com, and all proceeds go toward those efforts.