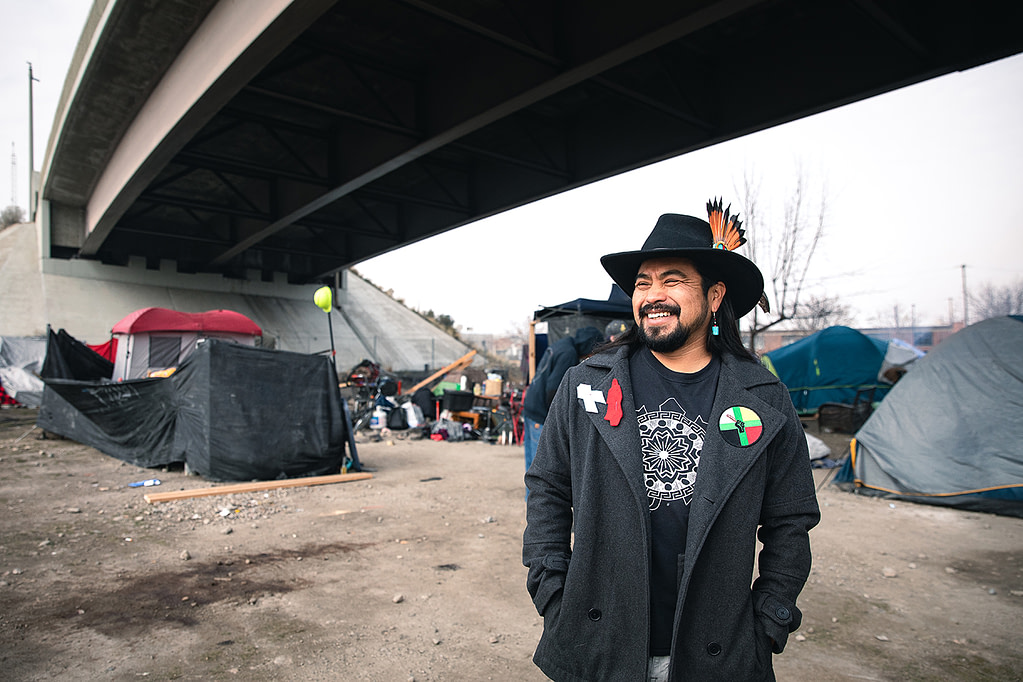 Carl Moore is Protecting the Future Of Our Global Family

Across his work with three separate organizations—the community-centric Pandos, environmental protection and sustainability group SLC Air Protectors and a newer project focused on unsheltered outreach, O.U.R’s (Our Unsheltered Relatives)—Carl Moore aims to support, protect and nourish all life on earth: “As far as leadership and the way we operate, we all believe that Indigenous people have a sacred stewardship to location [and] to take care of people and places and all of our relations,” he says, ”and that doesn’t just stop with human beings—that’s animals and plants and the air and the water and the mountains.”

Both Pandos and SLC Air Protectors were born out of the 2016 Standing Rock struggle, which Moore says “sparked the need to have organizations standing up for Indigenous sovereignty” for him and the organizations’ other co-founders. While these groups primarily serve Utah’s Indigenous nations, their shared genesis in the Dakotas begets a wider focus: Aid (food, clothing, COVID tests and more) from both organizations extends across the southwest desert and outreach goes as far as Minnesota, where they support the area’s Indigenous nations in the fight against the Line 3 pipeline.

In addition to events such as music and dance festivals, community Pow-wows and their annual, 350-mile prayer run from Bear’s Ears to Salt Lake, Pandos serves as the umbrella organization for Missing and Murdered Indigenous Women + Utah, ran by Michelle Brown and Jennifer Boyce. Along with the Indigenous protection and management of the Bear’s Ears monument, Moore cites the MMIW project as a primary concern for the group and its supporters. COVID-19 has halted some of the lobbying efforts previously undertaken by SLC Air Protectors, with the group also assisting in quarantine-related food relief, as well as other projects such as helping Southern Utah’s Goshute nation restore their community greenhouses.

“O.U.R’s (Our Unsheltered Relatives) is not just about feeding people—it’s also being there for people, acknowledging them [and] letting them voice whatever they have to voice.”

Around one year ago, O.U.R’s blossomed from a different catalyst. Moore and fellow Pandos Co-founder Dave John had helped set up and maintain Camp Last Hope, a westside campsite that hosted over 200 unsheltered residents until the city shut the camp down in February of 2021. Specifically, Moore and John would serve food at the camp on weekends and rejected the push to cease their services. “After Camp Last Hope was raided, we just continued cooking every weekend,” says Moore. The weekend meals have now shifted to only Saturdays, with O.U.R’s also providing transportation, clothing and assistance in maintaining and protecting the city’s camps among other services.

Again, community and interpersonal stewardship drive Moore’s work with O.U.R’s. In his view, one barrier facing the unsheltered community is a lack of respect and public awareness among Salt Lake residents about our neighbors. “[I’m] trying to alleviate stereotypes about unsheltered people and why they’re unsheltered,” says Moore, citing the video series on O.U.R’s’ Facebook page where he introduces our neighbors and their lives and documents law enforcement abuse of the unsheltered community as an example of this ethos. “O.U.R’s is not just about feeding people—it’s also being there for people, acknowledging them [and] letting them voice whatever they have to voice.”

“We have a moral obligation to take care of each other and treat each other like a good family.”